A Liminal Outer Space: On Celine Lee and Miguel Lorenzo Uy’s A Past, A Future

Celine Lee and Miguel Lorenzo Uy’s A Past, A Future is a simulacrum of space, if not space itself. Through digital manipulations of the photographic and play on mediums of light and steel, the exhibit transports the viewer into an outer space that negotiates the natural and the technological, the human and non-human. What Lee and Uy simulate thus lies in the interstices of our world and beyond — both here and there, and then and now — enclosing outer space and turning it into a liminal one. 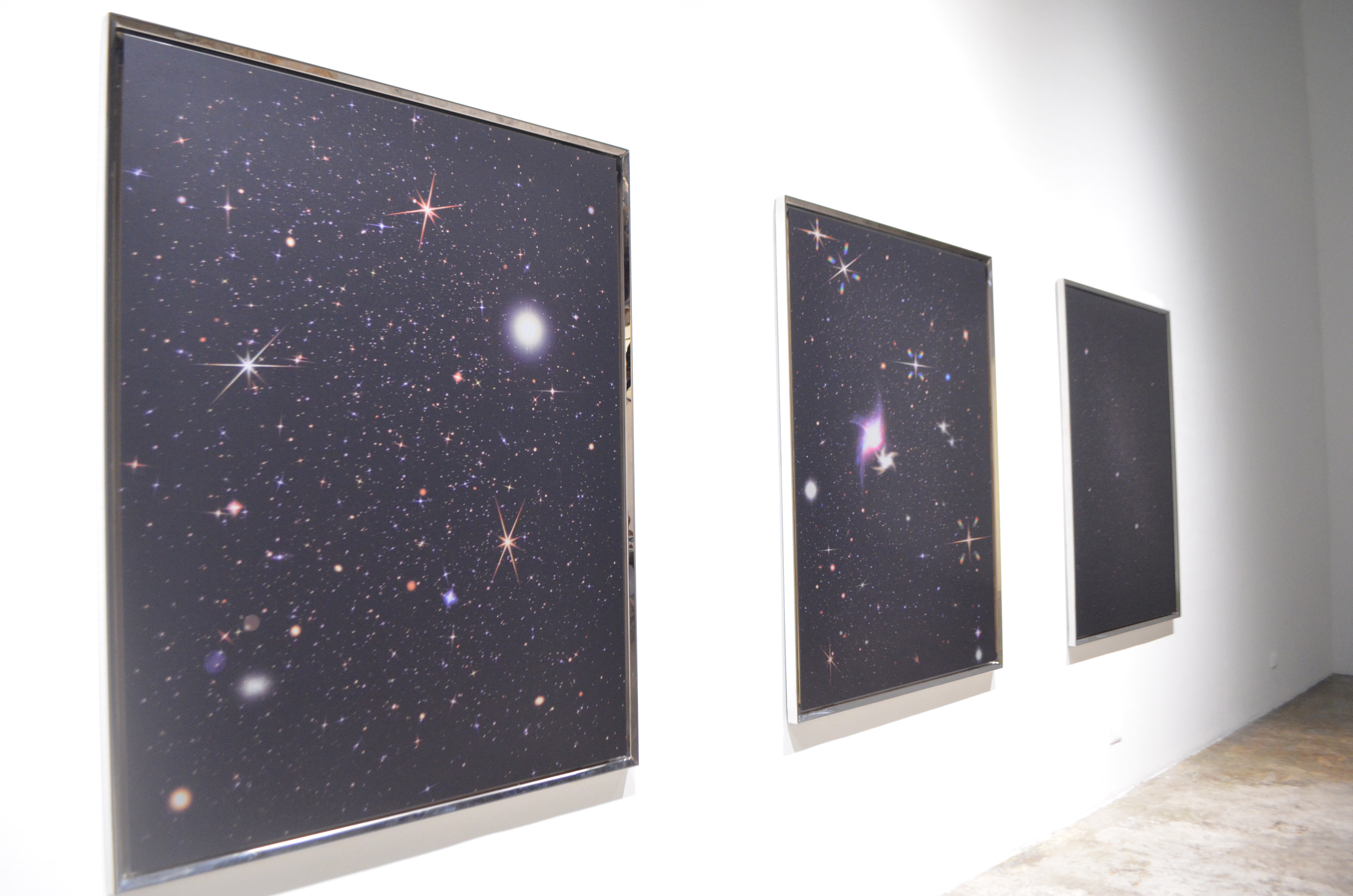 In Uy’s Astral Prison, we find a literal enclosure of outer space through a series of UV prints depicting endless specks of light akin to images of celestial bodies in the cosmos. Strikingly enclosed in steel frames, Astral Prison plays on closeness by rendering the infinite cosmos as a view outside a window — seemingly within yet beyond our reach. The same play on proximity is incorporated in a slow-panning video featuring close-ups of spacecrafts projected onto a vertical white screen that seems to project the viewer as well into outer space itself. As one is drawn by the illusory closeness towards the screen, the projection is disrupted by the viewer's shadow, and one is brought back down to earth. Despite the visual manipulation that works to transport the viewer elsewhere, one's shadow becomes a remnant of humanity inevitably seeping through the digital work. Uy's works thereby come together to suspend the viewer in a liminal position that is both here and there, and in between and beyond. 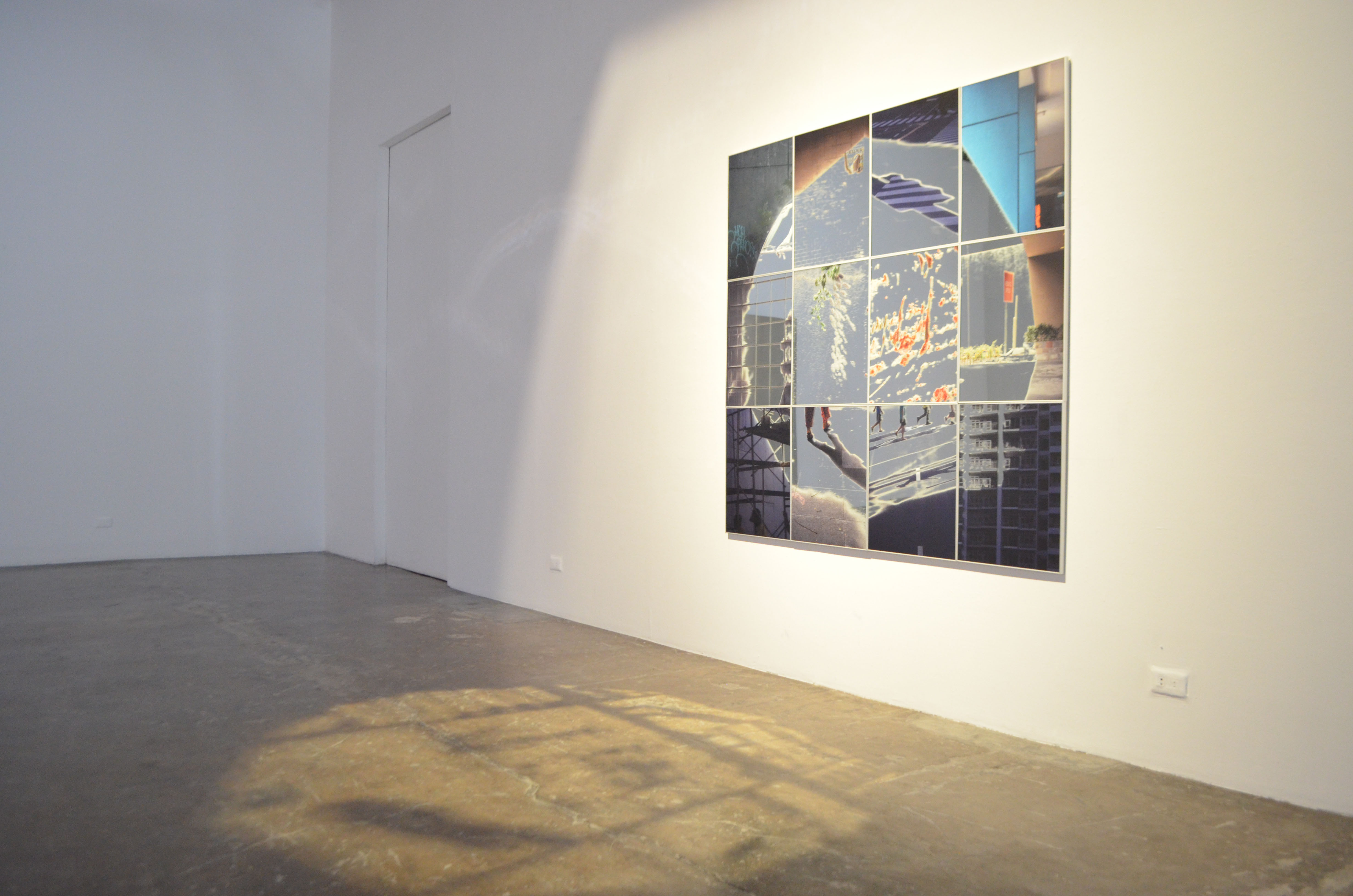 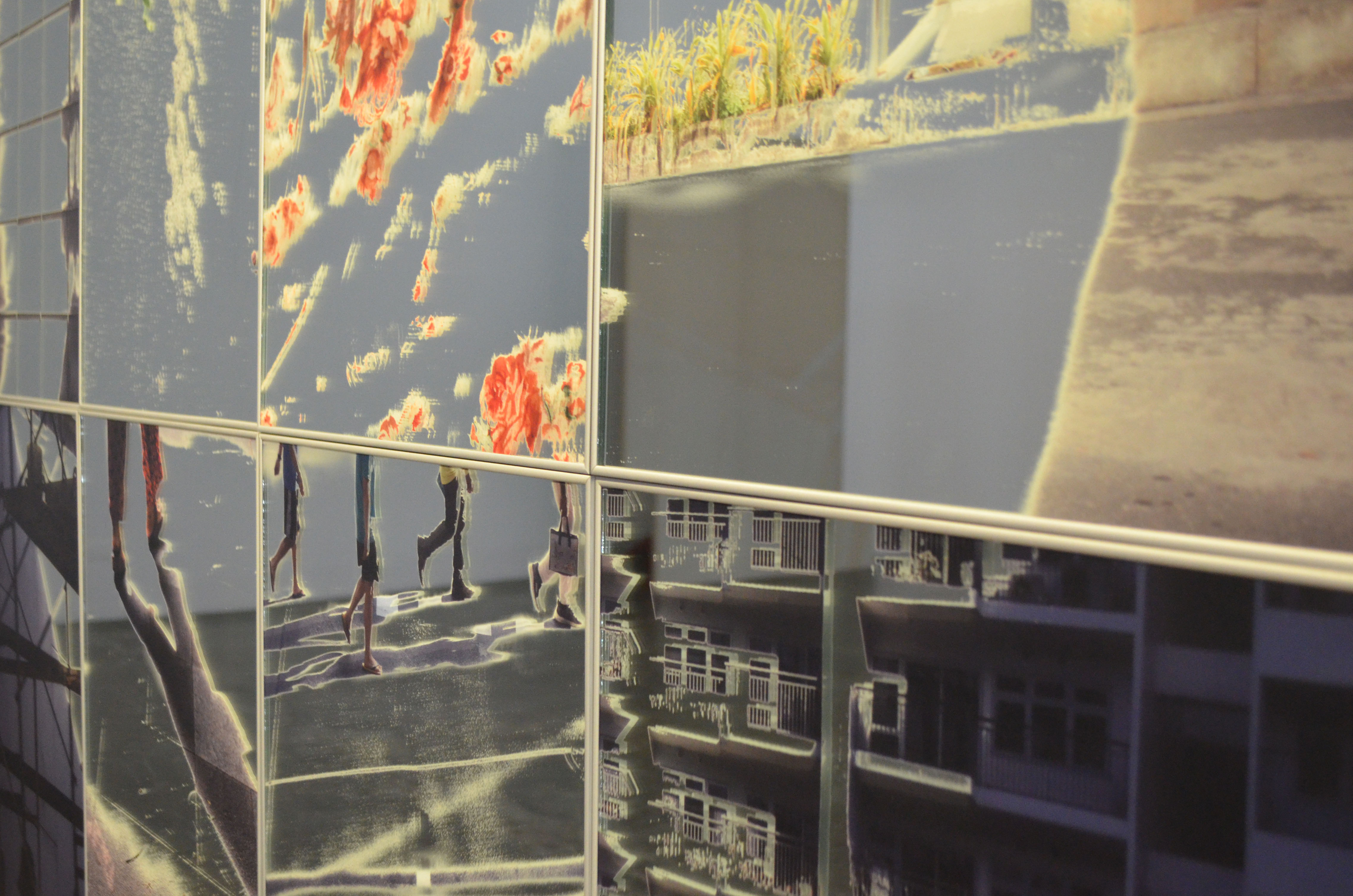 Meanwhile, Celine Lee's A Portrait of the Sun is an experimental play on light and shadows through the use of mirrors. Artificial light from above reflects against digitally manipulated photographic prints on mirrors arranged in a grid to cast on the ground an irregular spherical shape akin to puddles of sunlight. A closer look at Lee’s image manipulation reveals that sunlit portions of the original photographs have been cropped out, the places of which have been taken by the mirror surface itself. The result then is a simulacrum of sunlight where the viewer stands, confronted by a portrait of their own mirror image at the center of the ‘sun.’ With the light ‘taken’ from different photographs and reflected all at once into the exhibition space, the work allows the viewer to experience the aura of light anew. Here, Lee then makes a significant statement: that photography and digital manipulation do not diminish the aura of light but instead remediates the very experience of it. Lee’s sunlight, again — as in Uy’s works — thereby situates the viewer in a liminal position: first through its character as a simulacrum, as both real sunlight and not; and second by seeming to situate the viewer in multiple places at once by taking light from different photographic sources.

This play on liminality is also present in Lee’s Copper Vines where a suspended structure of contiguous wire fences reveals upon closer look steel wires transitioning into copper. With its copper vines akin to outgrowth, what then appears as a rigid urban structure suddenly seems to have a life of its own. The use of steel in Copper Vines — as in Uy’s Astral Prison — is interesting to note: it evokes the work of something mechanical and non-human while nonetheless letting a sense of humanity and the natural seep through the work. By depicting the transition of copper vines as something seemingly natural, again, Lee incorporates a play on medium to remediate the aura of outgrowth: it is both real and not. Notable here as well is how the imagery of wire fences recalls the remnants of photographic urban landscapes still vaguely visible from A Portrait of the Sun. Suspended mid-air, the work transports the viewer elsewhere — perhaps alongside the celestial bodies and spacecrafts in Uy’s works, in a liminal outer space both urban and cosmic. 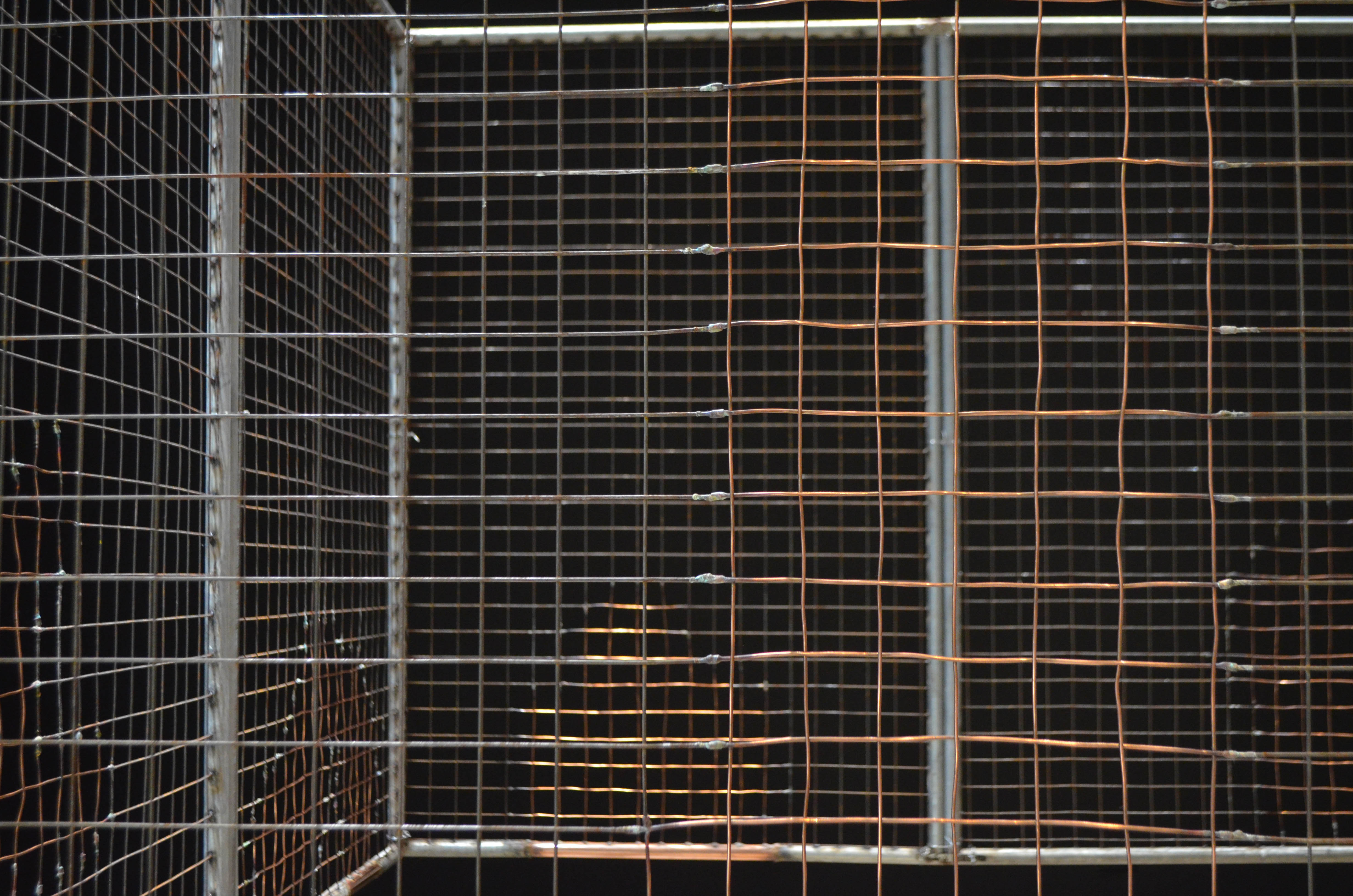 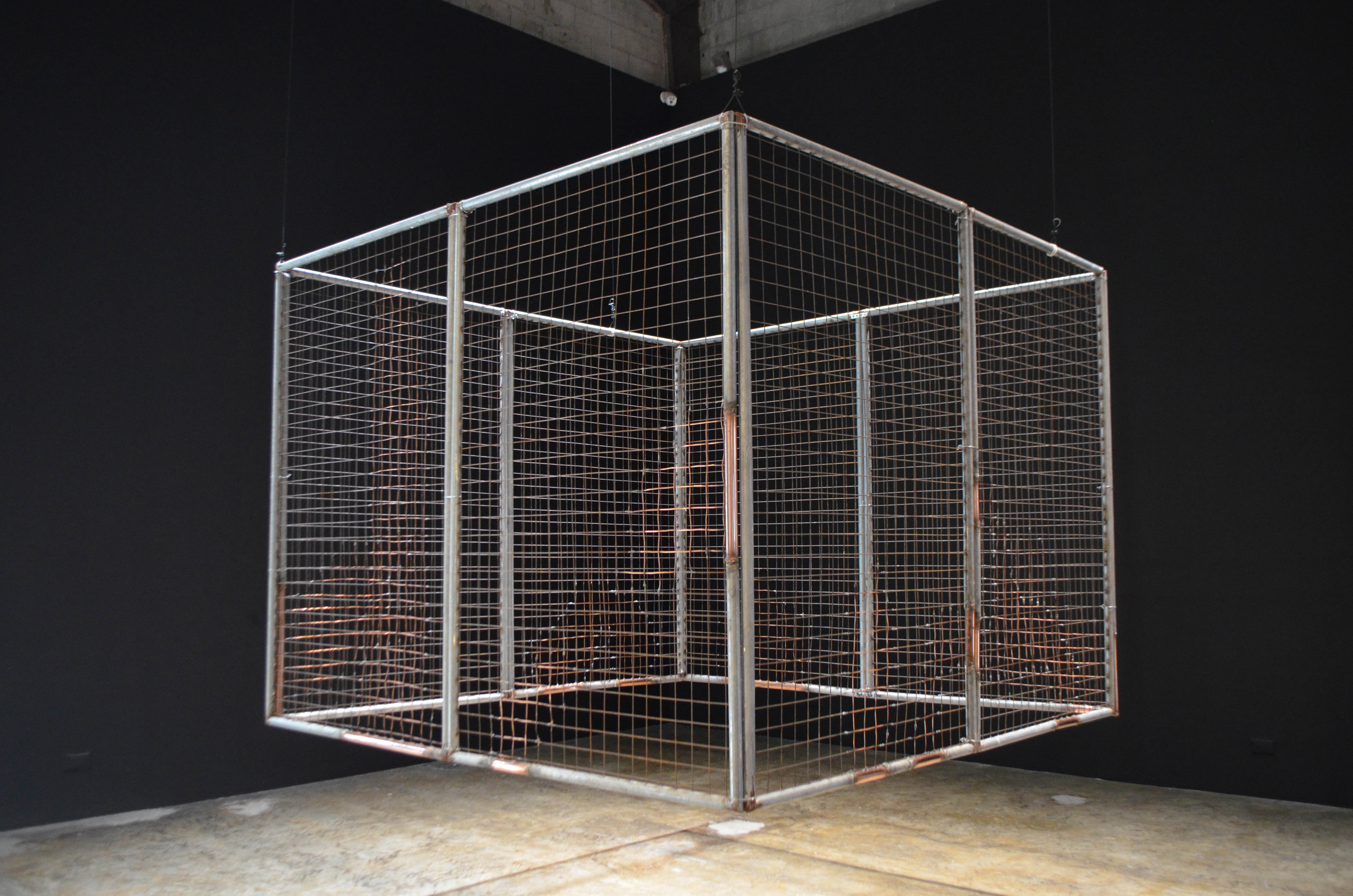 Lee and Uy’s pieces then ultimately come together through recurring plays on liminality with the works teetering between the natural and the technological and here and there. By turning the simulacrum of outer space into a liminal one, A Past, A Future draws a relationship with the viewer that is almost intimate, but not quite. Outer space is drawn closer, but remains unreachable to the viewer who is at once situated in the urban and natural. The result then is a relationship that is intimately disconnected which, as Koki Lxx writes, becomes a metaphor for our time — a paradoxical era of simultaneous hyperlink and disconnection. By situating the viewer in outer space, Lee and Uy thus make a statement on such a time: that we have become as distant as we are connected. We are here and yet there.

A Past, A Future is on view at Finale Art File in Makati City until December 5.