Describing the body of works in his first solo exhibition Ispirituwal Transaction as an “assemblage of energy”, filmmaker Jet Leyco easily evokes a dynamism not unlike the assemblage of imagery we find in cinema. The salient difference, however, between film and the pieces in Ispirituwal Transaction lies in the seemingly static images of his collage works in archival print.

At a glance, the vibrantly psychedelic assemblage of encyclopedic and archival images, and personal photographs instinctively draws the viewer to look for patterns — a perfect symmetry within the compositions of Leyco’s pieces. A closer look, however, reveals the absence of such. Instead, asymmetry and a scattered interrelatedness deeply intersperse his works. What is captured in these assemblages of energy, then, is a static dynamism– or a framed movement of collaged worlds, recalling the simultaneity embedded in film — Leyco’s foremost artistic medium. The very absence of perfect symmetry in the worlds of his works suggests an unpredictability and plurality, turning the encyclopedic into a collage of the polyphonic. To be gleaned from this then is the intermingling of situated truths– whether they be scientific, historical, cultural, or personal. These works of truth documentation, in the artist’s words, become a “refraction of reality” in Ispirituwal Transaction as the pieces, through their vibrantly collaged abstractions, invoke a psychedelic sense in the viewer who, poised across the work, faces what Leyco calls “a kaleidoscope of truths”. 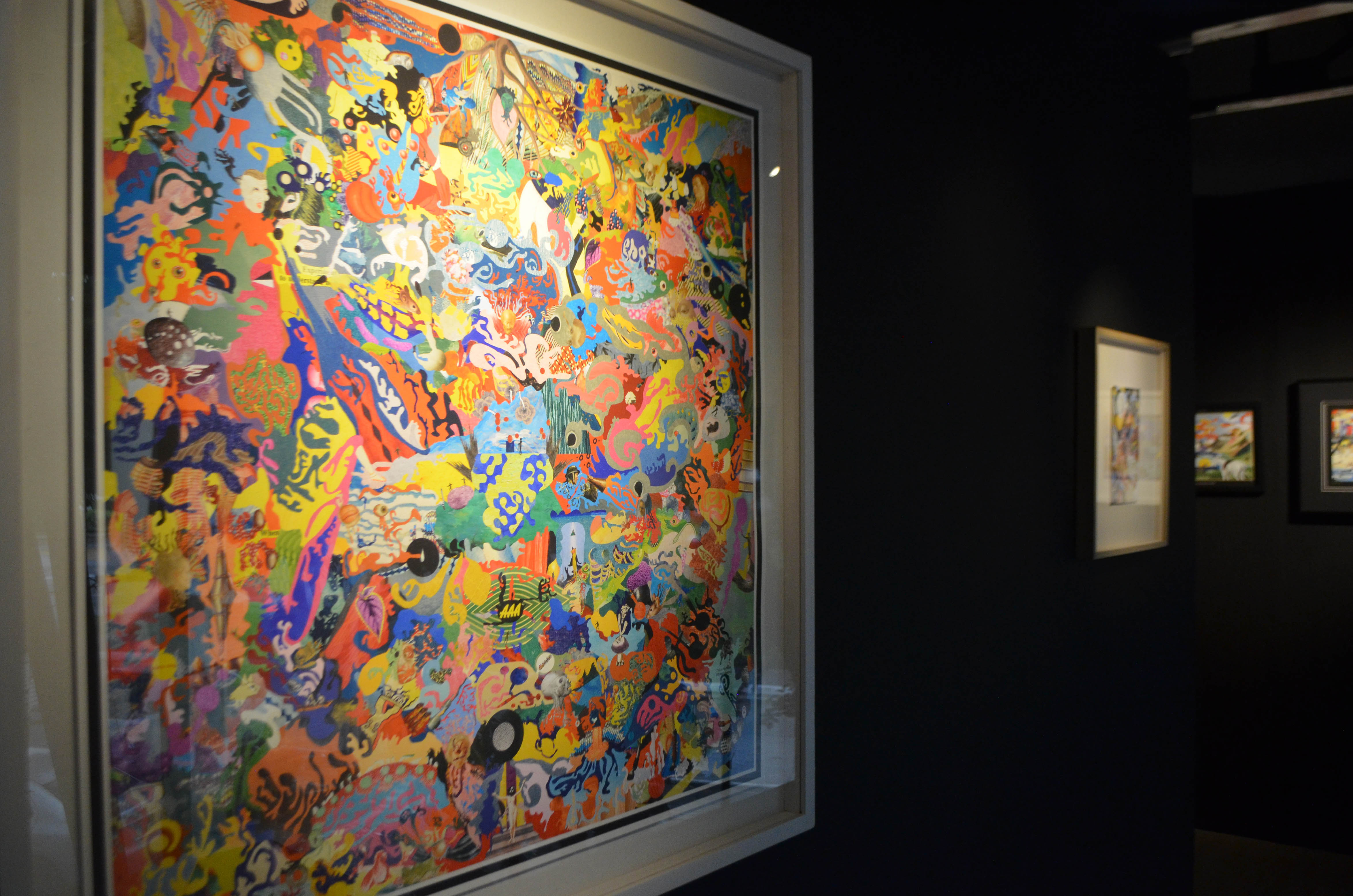 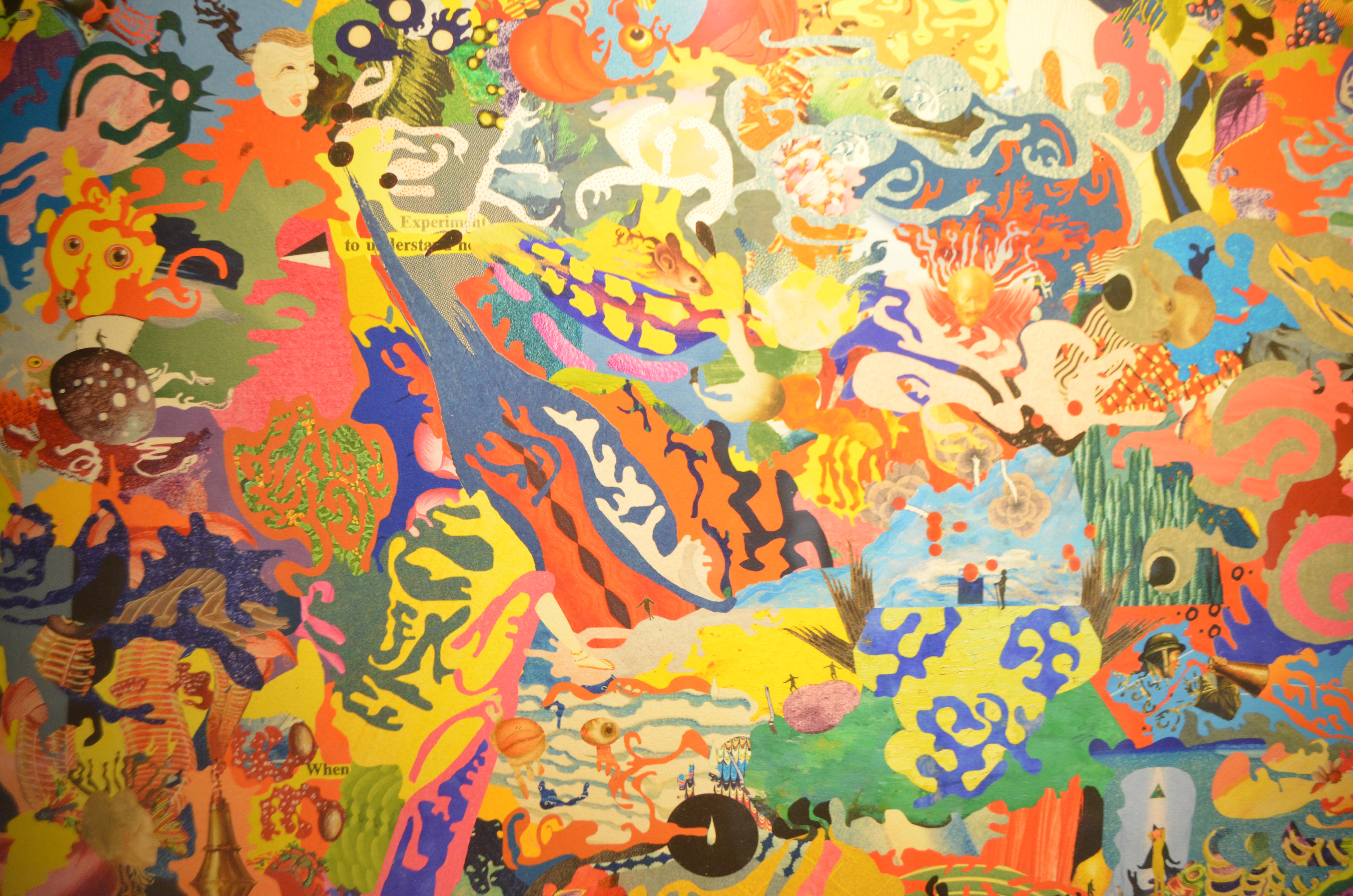 Such a psychedelic sense evokes the existential in relation to the instinctively human search for a truth, a pattern, a perfect symmetry or perhaps — a divine revelation to make sense and order out of the collaged worlds of Ispirituwal Transaction. But again, the absence of perfect symmetry and the visibility instead of a static dynamism through the merging worlds in Leyco’s pieces betray the search for a singular absolute truth. Here, there is no such thing as a divine revelation. Instead, there are, but revelations — a plurality of situated truths in experiencing reality, a plurality of worlds and of meanings. With the collapse of the search for an archaic singular truth then comes the espousal of the contemporary spiritual — conceiving of truths as revelations simultaneously here and there, and now and then as Leyco’s collaged worlds echo the filmic spirit of montage. This montage of revelations presented as collaged abstractions is not a purely iconoclastic destruction of truth, but instead a vividly dynamic discourse of situated truths that worlds our contemporary experience of reality as happening here and there, and now and then.

In the piece ‘Faces of Aktuwal God’ (2021), vibrant curvilinear shapes seep and metamorphose into the photographic and typographic to create a reef-like expanse, suggesting a fluid interrelatedness in the midst of its own life-giving chaos. As the viewer is drawn to search for the ‘faces’ in frame as the title of the piece suggests, it then becomes clear that the only recourse is to get lost in its own lush plurality as it becomes impossible to get ahold of each and every instance of what could be claimed as ‘faces of god’. Adjacent to this blatantly spiritual sense is ‘Enlightenment V.2’ (2021) which epitomizes the search for truth or perhaps — enlightenment itself —  as its composition misleads the viewer towards a perfect symmetry. As the central figure ascends against a backdrop of bold shapes in a collage emulating stained glass, we are led to realize the work’s illusory symmetry at a closer look as the photographic and the geometric emerge with their differences left and right. In both pieces, what then becomes of the search for truth and the ‘faces of god’ is an inevitable confrontation with plurality. 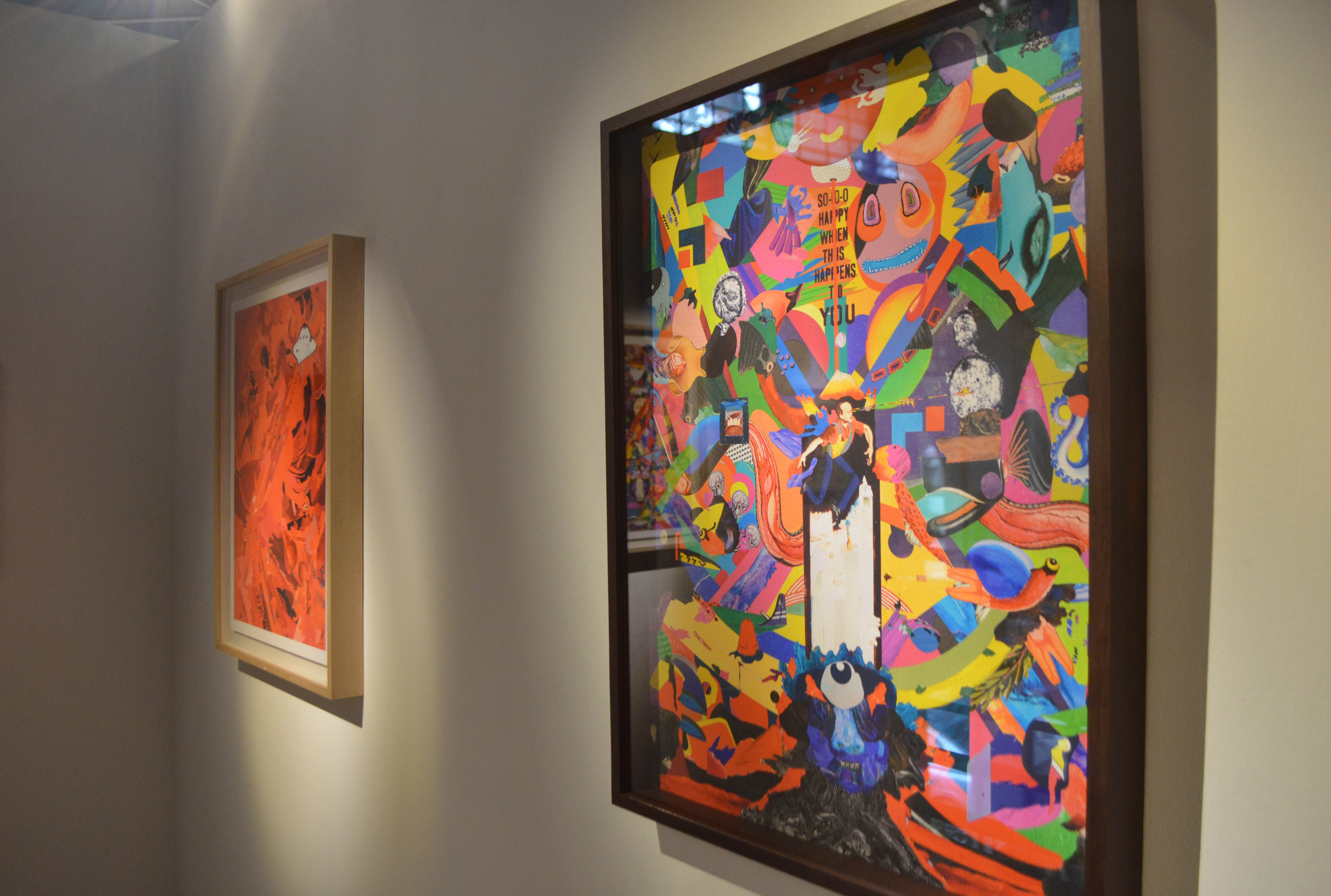 Meanwhile, Leyco’s postcard-like print ‘Manila Bay Sunset 2022’ (2021) reconstructs an urban space using the geometric and the encyclopedic to absurdly depict the picturesquely renowned ‘Manila Bay Sunset’ as a hellish landscape scattered with suffering bodies. Here, the superimposition of images becomes a superimposition of different times — of worlds past, present, and future. As these are simultaneously presented, the suffering bodies from different milieus intermingle to reflect, albeit in an imaginary urban space, the ‘truths’ of human suffering. Hence, the absurd reconstruction of the ‘Manila Bay Sunset’ clues us in to the truths of our own time as the present Metropolitan Manila evidently becomes a hellish site of urban politics and contradictions — a revelation here creatively and critically made apparent through the collaging of worlds. 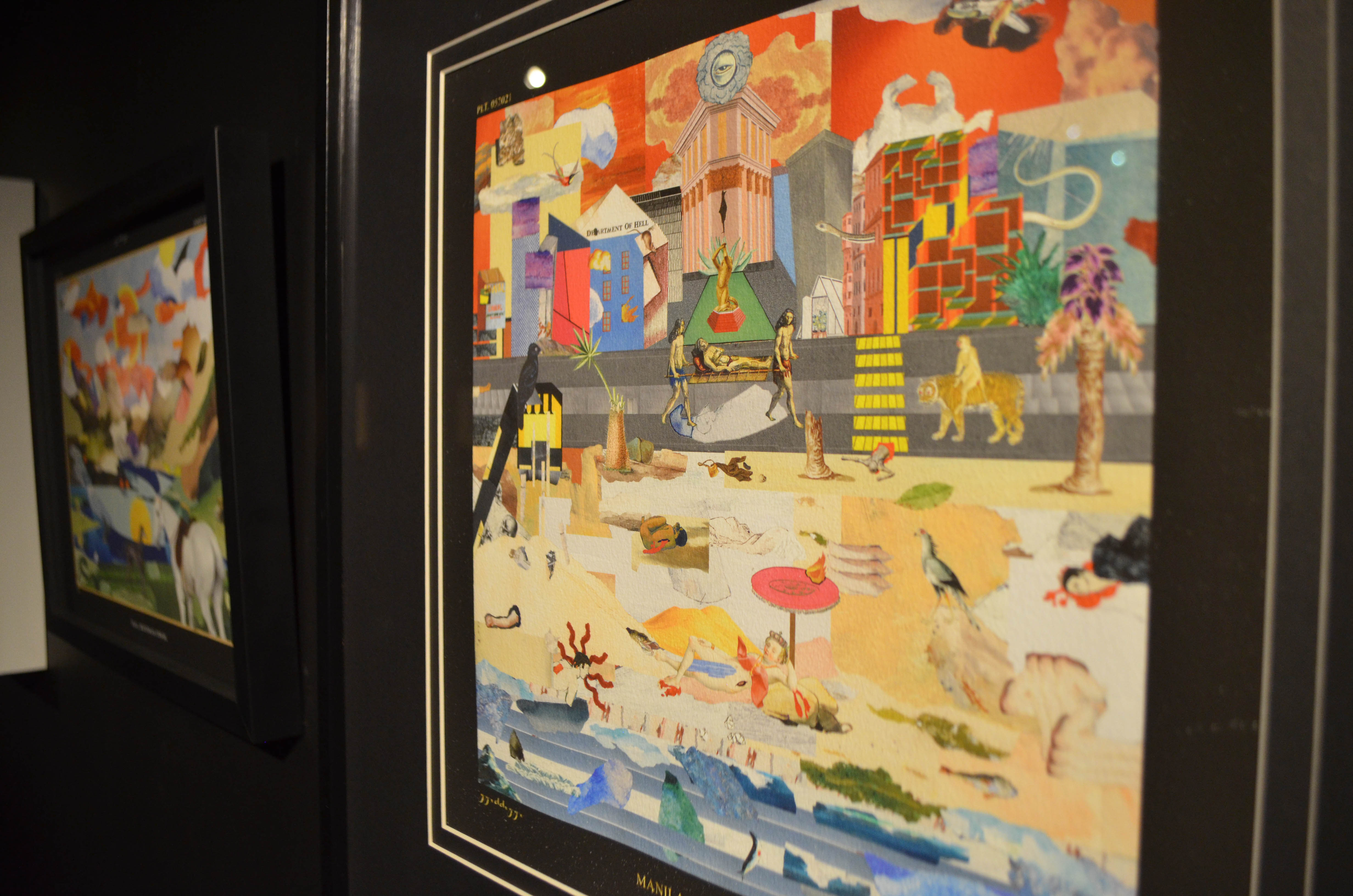 Leyco significantly reflects thus on the making of his works: “To remind me that truth lies not in the answer but in the transaction.” With this statement, he explicitly does away with the search for a singular truth while embracing instead a plurality, along with the ‘transaction’ or the discourse constituting situated truths. What this implies is that truths are ever-happening transactions, or that they are continuously being revealed as different worlds or milieus come together in a discursive montage of the encyclopedic and the polyphonic. If there is any truth to be sought, it is to be found only in the very act or continuous process of transaction: in the perennial confluence of diverse worlds or perspectives and situated experiences that — although scattered across different milieus — become interrelatedly meaningful.

Embedded in Leyco’s works then is this contemporary spirit of dynamism and plurality that drives our search for meaning in the postmodern world. If Leyco’s collage works are assemblages of energy where ‘truth’ lies, then these truths are only as meaningful as they are pluralistically transacted. While the spirit’s search for truth and meaning continues even in the postmodern world of scattered interrelatedness, Ispirituwal Transaction turns away from a singular absolute truth as ‘answer,’ and instead espouses finding revelations in the postmodern act of collaging worlds in the ever-expanding grand scheme of things.