In recent years, there’s been a resurgence in public interest in folk art. Textiles, basketry, tattooing, woodworking, and other art forms have gradually found their own niche in retail markets. Whether as a response to global trends or a means of cultural preservation, local consumers are seemingly shifting their attention to our own natural riches. 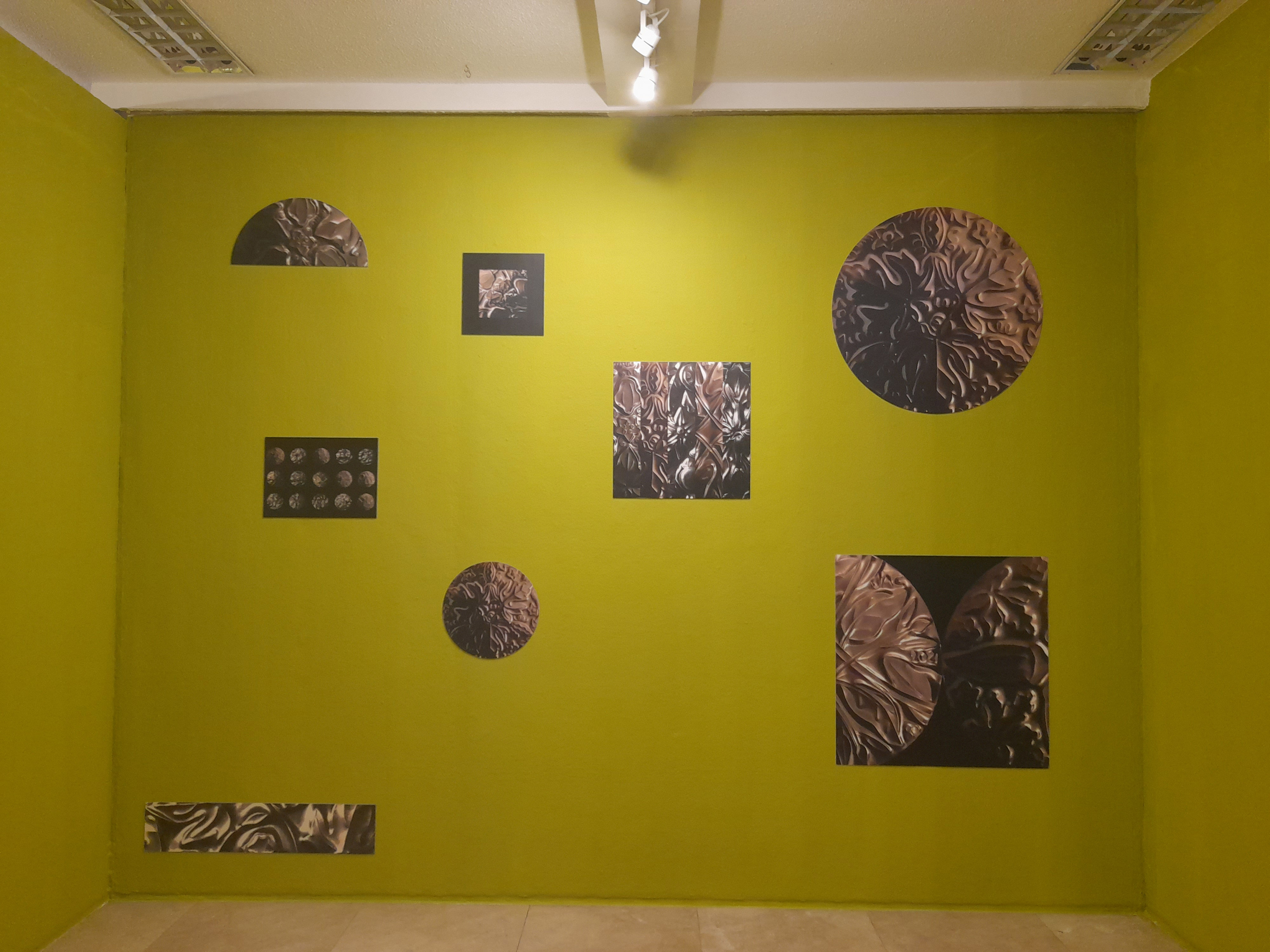 Enlarged prints installed in the gallery, showing details of each repoussé work. Image courtesy of the writer.
Delete

Through the art of repoussé, these riches found their most overt manifestation. This historic art form involves the engraving of ornate patterns into sheets of metal to create intricately-designed metalware. In precolonial times, repoussé found its medium in gold — from bangles and earrings, to plaques and funerary masks: all bearing the marks of skilled metalworkers. The country’s natural gold has since all but waned, but the tradition of repoussé carries on.

Repoussé finds a modern voice in the art of Jandy Carvajal. An artist and educator from the University of the Philippines Baguio, Carvajal’s extensive body of work has been devoted to his study of folk art. His fascination with repousse stems from his Catholic background, where he grew intrigued from a young age at the metalwork adorning religious sacramentals. 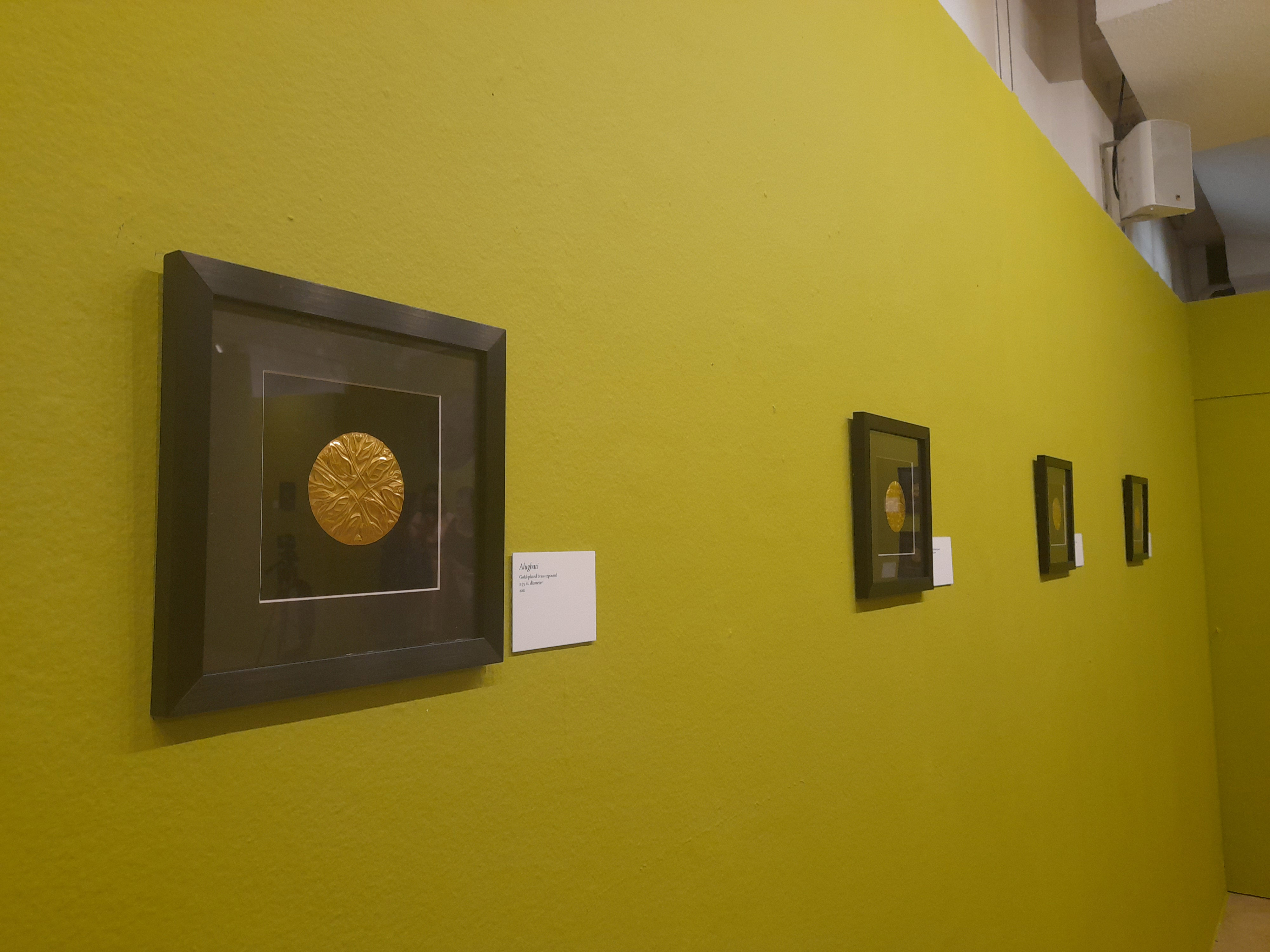 Ang Ating Mga Kayamanan sa Bakuran marks Carvajal’s third solo show dedicated to the art. In small gold-plated brass discs, he traces meticulous, delicate patterns that depict what has, for the artist, become a treasure in more ways than one: vegetables. Okra, kalabasa, saluyot, sitaw, kangkong, and more are rendered in as dignified a manner as the repoussé works of nobility. Having been conceived during the time of the COVID-19 pandemic, where the attention of many was turned to their backyards and budding gardens, Carvajal’s works ponder what we may consider to be our true riches.

Displayed like fine jewelry in elegant frames, Carvajal’s repoussé pieces pose the question of what can truly be considered treasure. The artist channeled his experiences throughout the pandemic not just in relation to planting, but in observing a time where hunger and wealth became two of the world’s most pressing concerns. There’s an irony in depicting our edible wealth in such a reverent manner through inedible means. We regard these vegetables rightfully so as a natural treasure, yet what do we gain by viewing them through the lens of material wealth? Where does the value lie if we aren’t able to reap the harvests of what we sow? At a time when issues of health plague the entire country, Carvajal’s works serve up a biting reminder that without truly providing for one’s needs, the mere promise of sustenance can be nothing but a polished smokescreen. 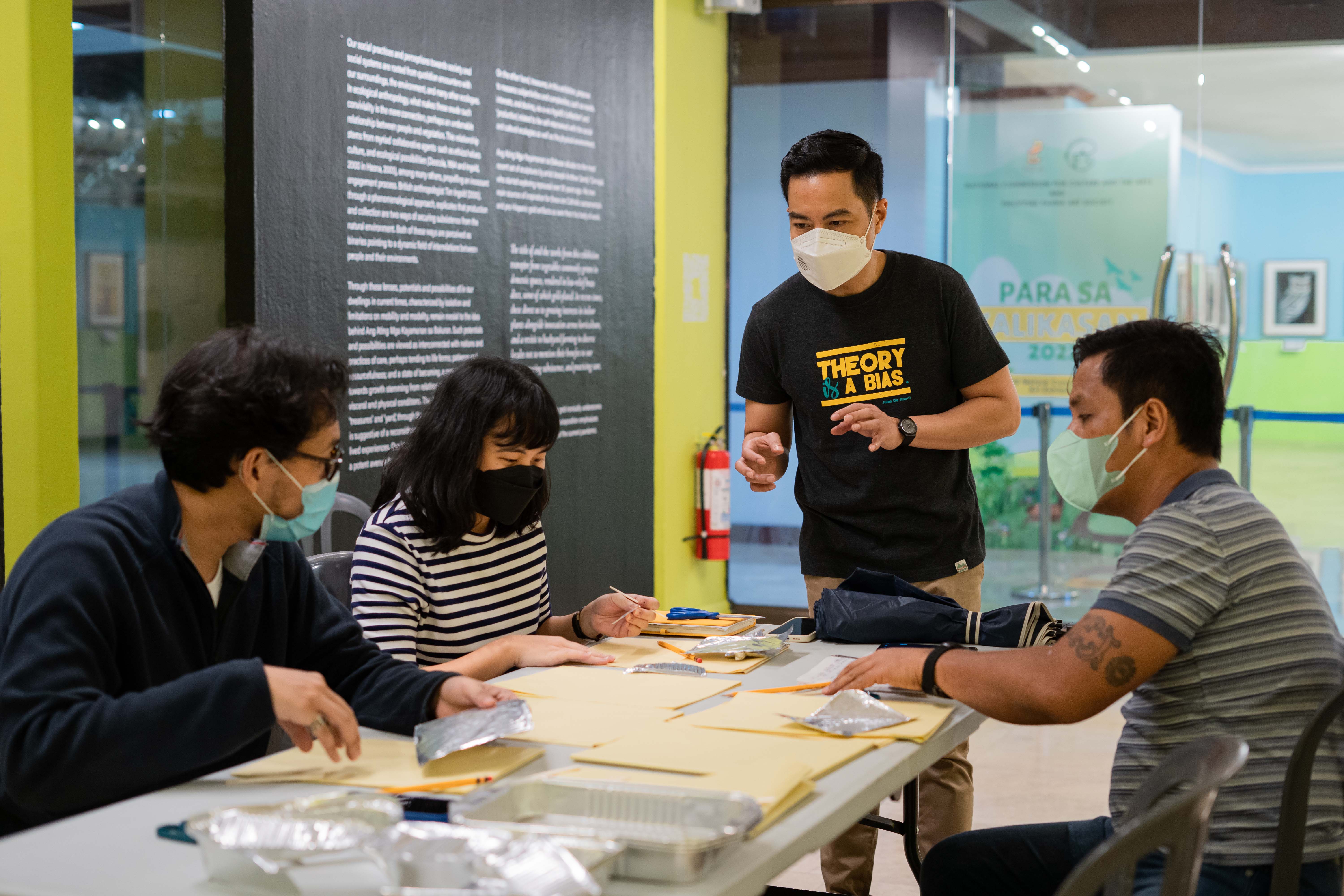 Carvajal leaves these layered thematic associations up to his viewer. Ultimately, he is guided by the process of repoussé. He was first introduced to the practice in school, where he made more than his fair share of artworks using aluminum sheets. What struck the artist was the art form’s versatility and adaptability, and how even with makeshift tools and the simplest of manipulations, one could produce a piece that appeared extravagant and costly. Carvajal’s mindful use of his materials attests to the priceless value of individual care over the final product. 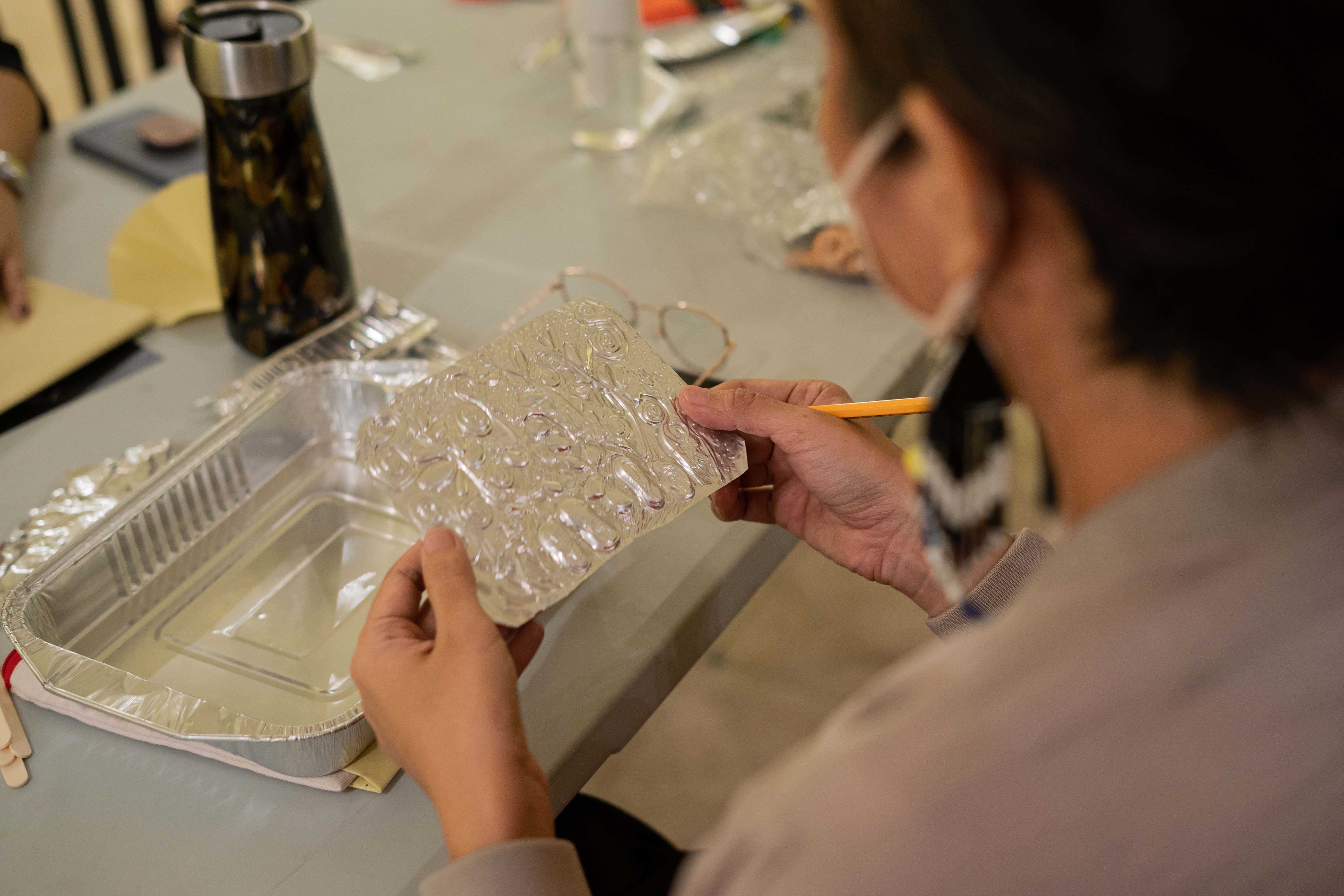 From the repoussé workshop. Image courtesy of Marrianel Crisostomo.
Delete

An important factor Carvajal considers is practicality. He opts for simple tools, like popsicle sticks and pencils, to make marks on each metal sheet. When starting with repoussé, he would often practice repeatedly on aluminum tins to get a handle on the level of pressure needed to emboss but not puncture the sheet. Until now, the artist admits he has some difficulty, as marks cannot be erased. Yet he finds a way to adapt each mark to the work, whether it calls for something detailed and decorative, or simple and expressive. Far from being antiquated, Carvajal’s practice shows how the art is still finding new modes of contemporary expression. 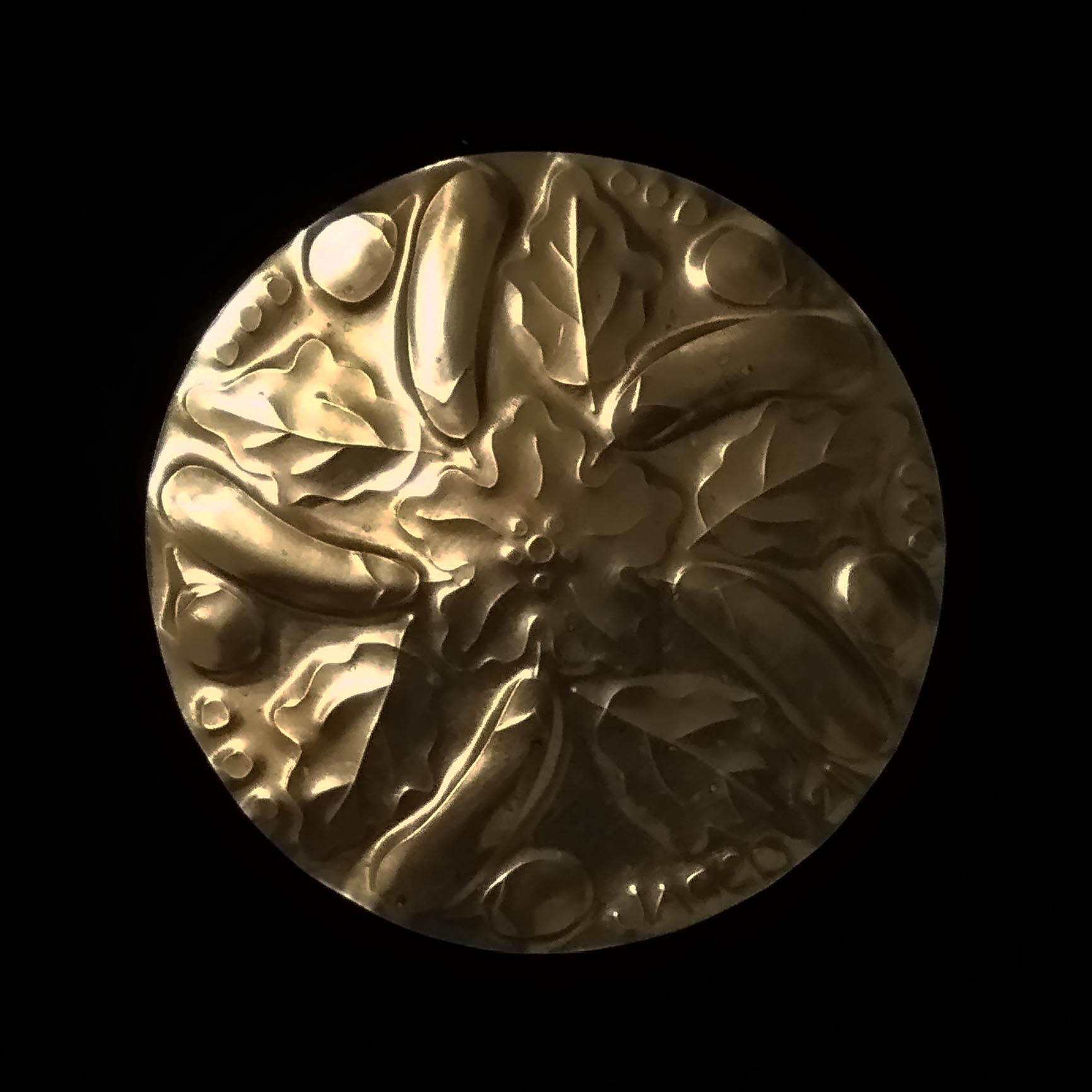 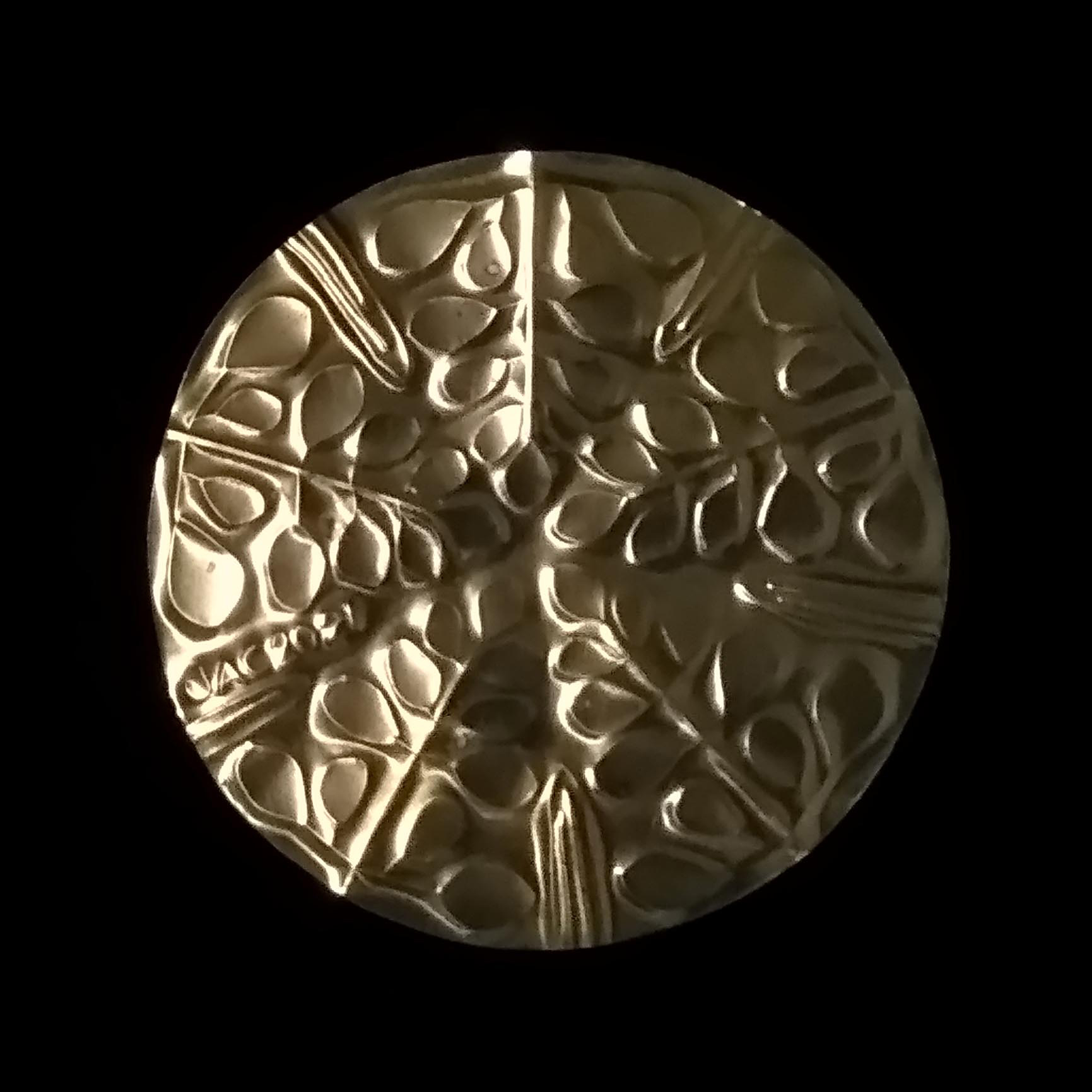 Gold was once a commonplace resource. The Philippines was home to much more prevalent natural stores of gold, and it became a symbol not of stratified wealth, but of cumulative social wealth. Rich gold adornments were worn by members of both high and low social classes and signified the wealth of communities as a whole. Recalling this history as we view Carvajal’s works today, we observe them as odes to the past in more ways than one. They remind us of a centuries old artistic tradition and the skill of those who perfected it. And in the vein of uncovering true treasure, they bring us remnants of a time when wealth did not have such a politically and economically fragmented definition. There’s further irony to be found in depicting wealth with a symbol so synonymous with the term, yet so elusive as far as actually translating to attainable value. It’s difficult to conceive of gold as more than a luxury reaped by the elite, much less one that can be adorned by lower social classes as they once were.

Carvajal claims that art forms constantly change, and that even a practice as rooted in our past like repoussé can continue to evolve while upholding its heritage. Similarly, whatever kind of gold we may covet – monetary, agricultural, artistic – will change with the unpredictable flow of history. But perhaps as long as we keep sight of the true nature of wealth, they nevertheless can retain their shine.