Taking the shape, elements and essence of a tarot deck, Manix Abrera plays the ‘Author’ and ‘Illustrator’ of various trajectories with his latest offering at Galerie Stephanie, Tahakin.

Abrera’s illustrations achieve a fine balance between childlike light-heartedness and shrewd gravitas that lends itself to rather poignant confrontations when viewing the works. Tarot decks and astrology, and comic strips and cartoons are hardly the modes of delivery for exploring the many quandaries of the human experience, yet the artist is resolute in their potency, their credibility. 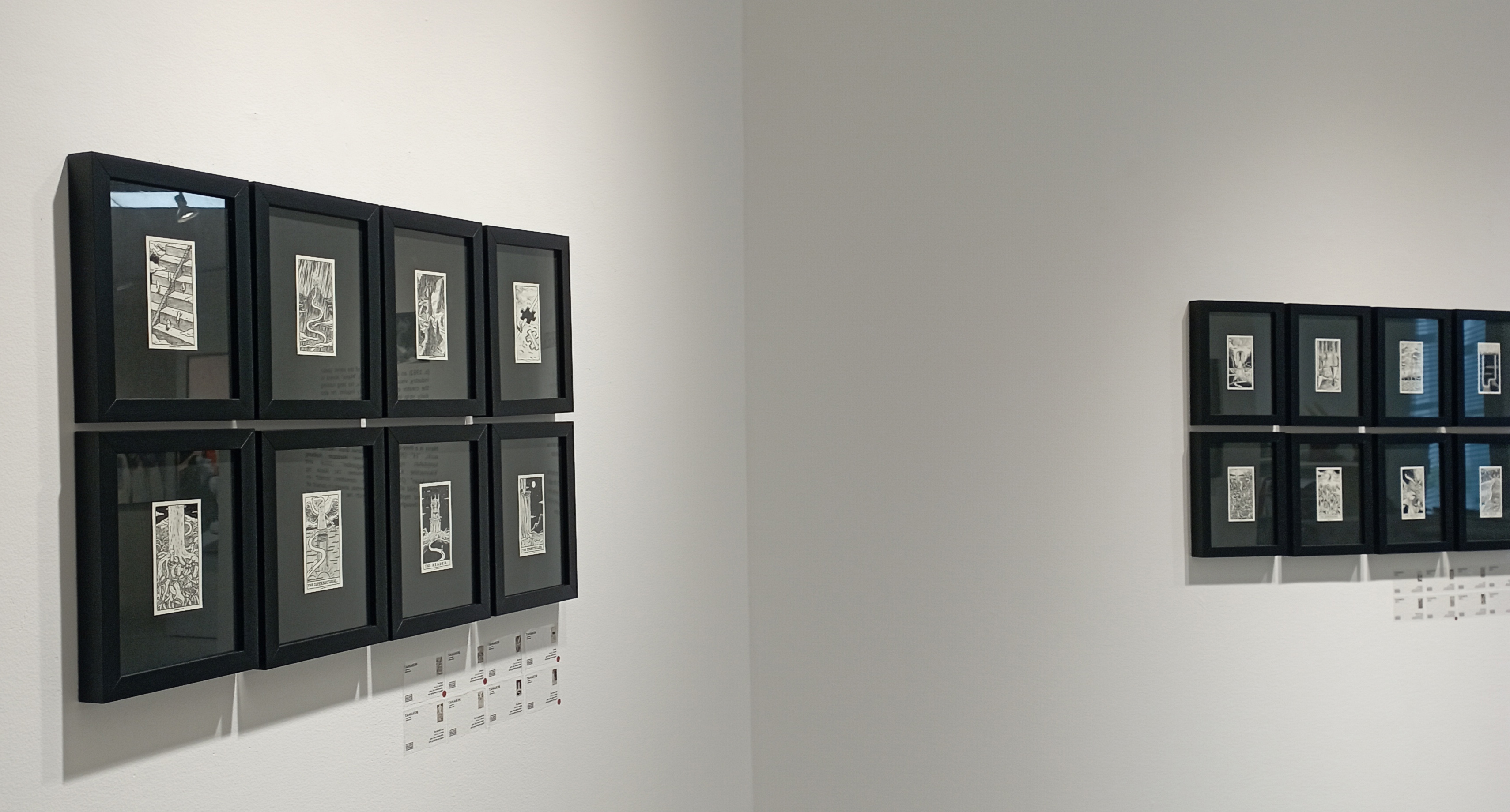 Tarot cards have long been used to predict the future, and just as much been contested as such. In Tahakin, Abrera looks to their viability, not only in telling the future but in engaging one’s past and connecting one with the present. Adopting and adapting their form and sigils, the artist retains their mystical quality but grounds the images with the nostalgic appeal of comic books. As they traverse all sorts of paths, the iconic wide-eyed figures deviate from the archetypes one finds in the tarot deck: they are shown exasperated, floundering, and frightened. 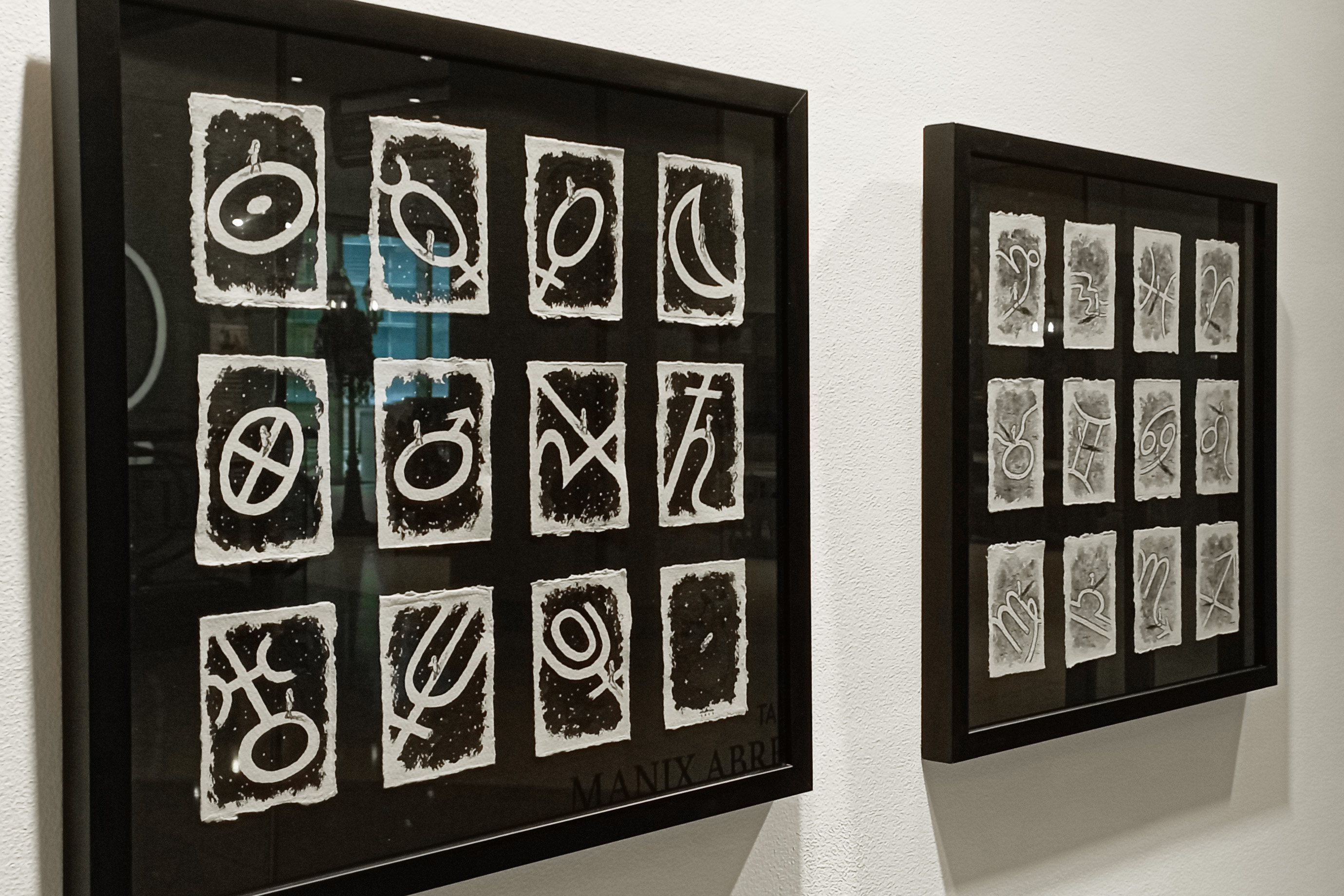 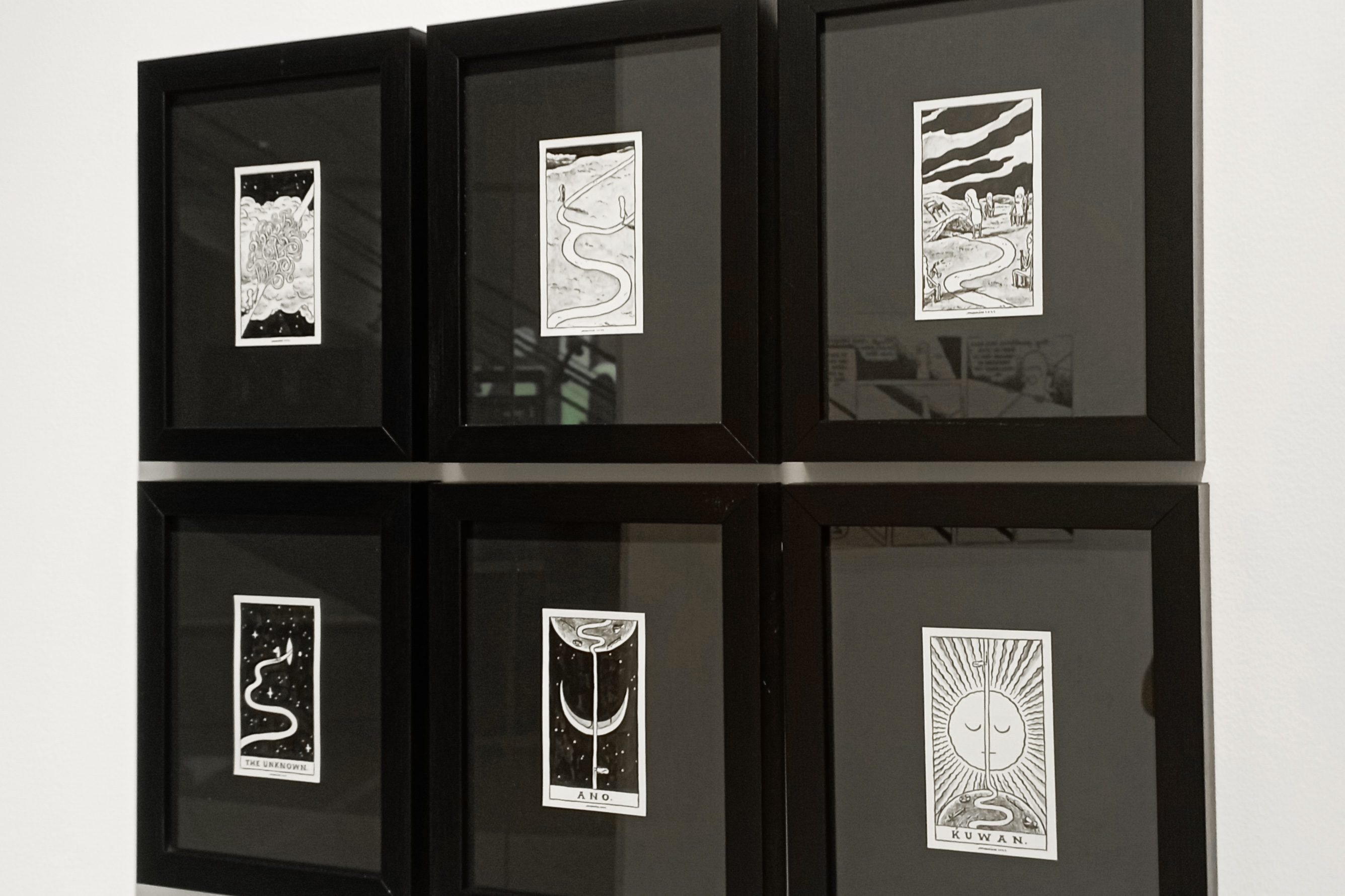 It is also a sizable deck, made up of more than the standard number of cards in a tarot deck (there are typically 78 cards: 22 make up the Major Arcana, while 56 the Lessor/Minor Arcana). A mode of occult divination, tarot cards do not simply foretell one’s fate; they present possibilities and alternatives for the future. Abrera sticks by this principle and, again, with his trademark characters and the motif of a meandering path, plots a narrative with no clear beginning or end, A or B, before and after.

Besides his distinct style which lends the pen and ink works the charm and playfulness to be approachable and accessible, there is Manix’s humorous forthrightness that takes away the sometimes intimidating or even too cryptic nature of tarot cards. Paths become knotted, others fork off inconveniently. There are sudden sharp drops and turns; other times things go topsy-turvy. Just as familiar are the dense thickets, that can throw one off the path, lush as they are in Beautiful Chaos. Sometimes, like Manix’s character realises in Stepping Stones, the path isn’t a path as life prods us to take certain leaps of faith. 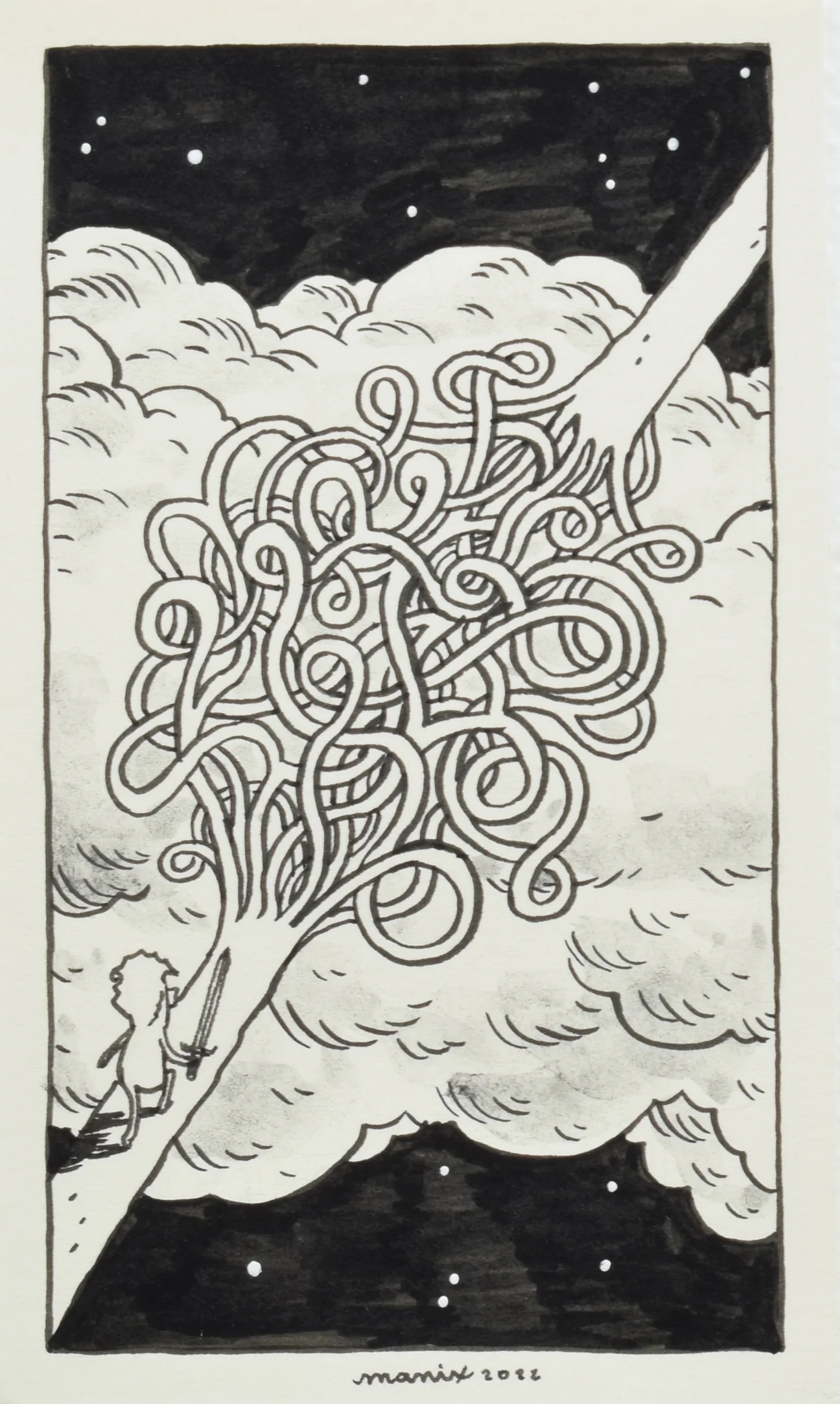 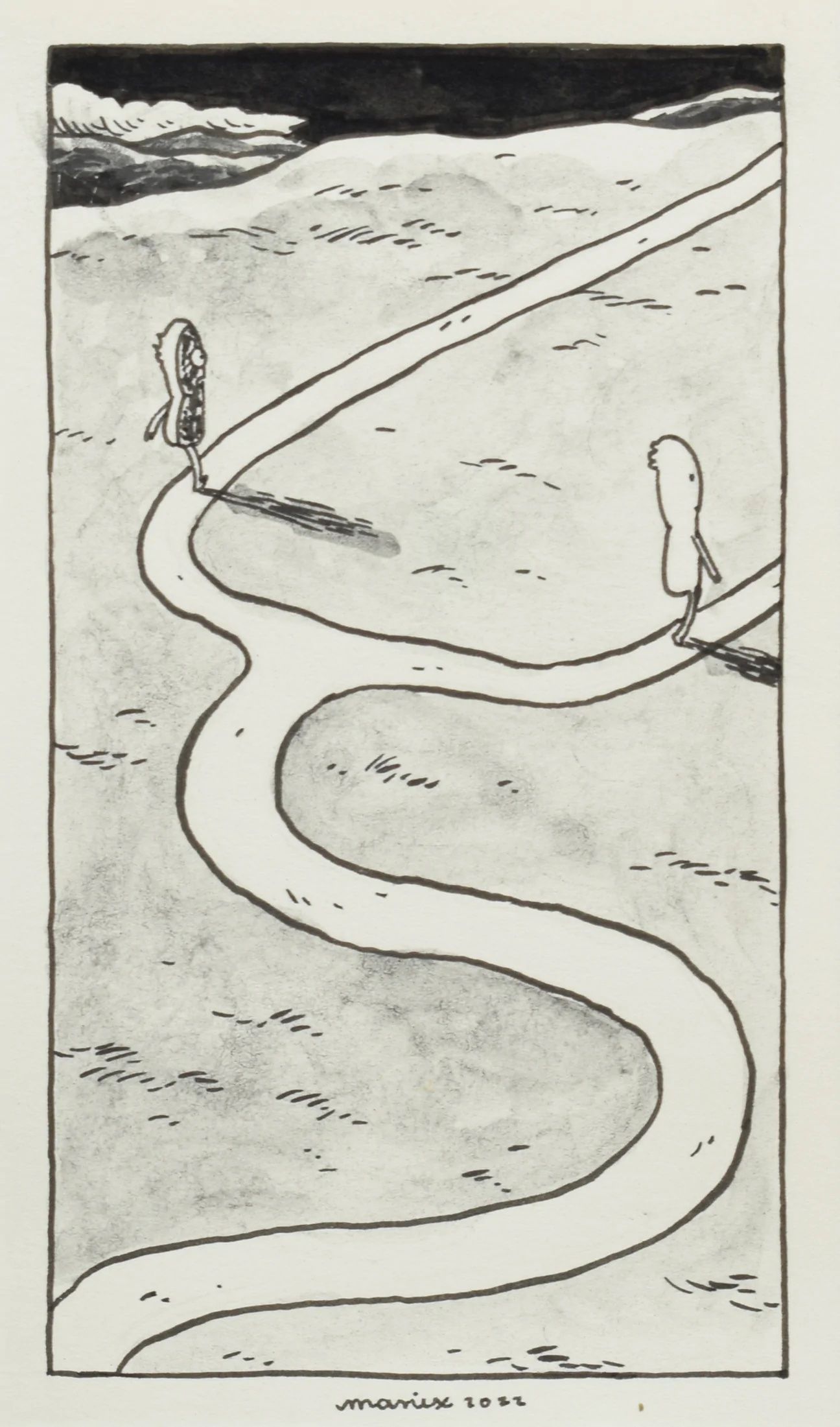 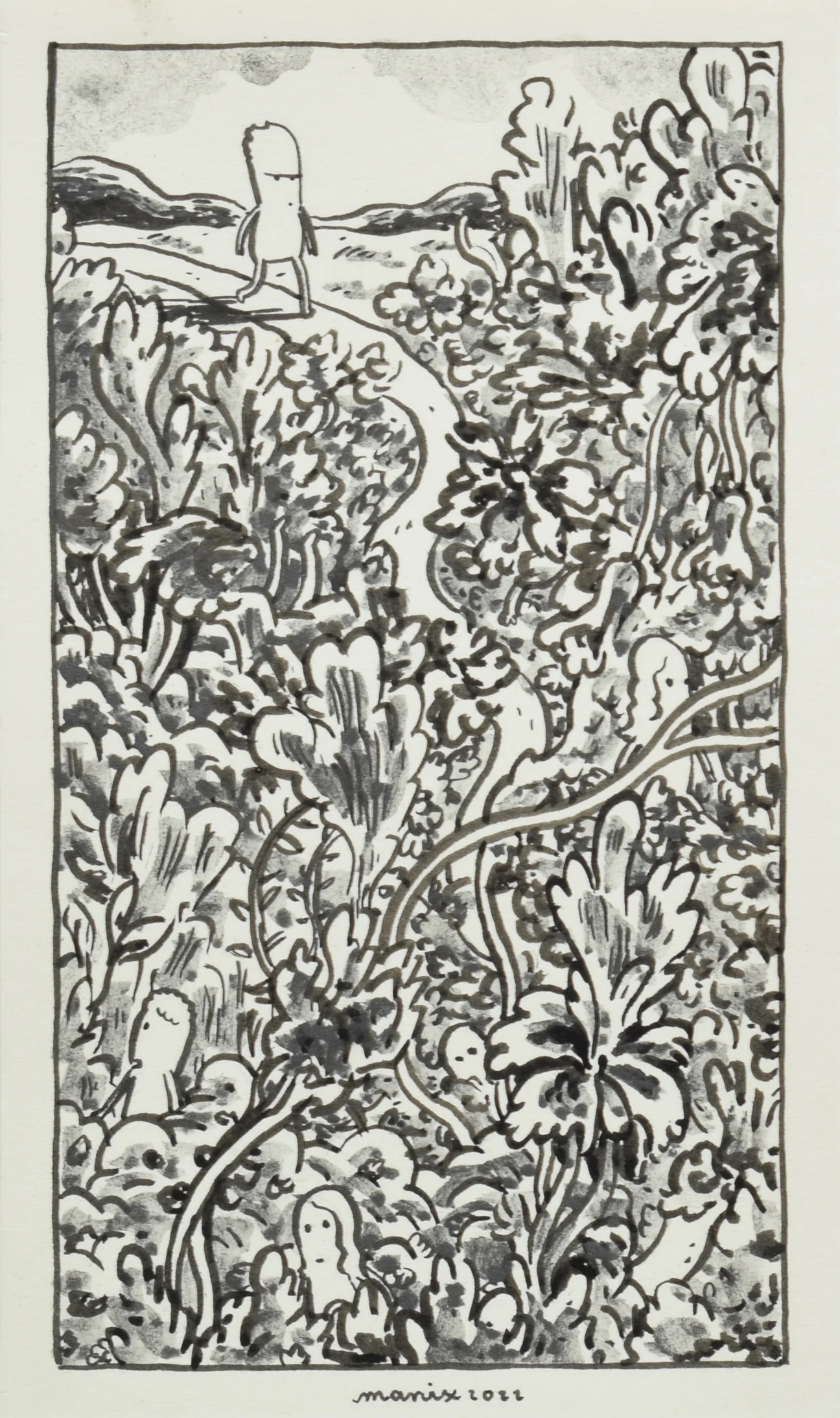 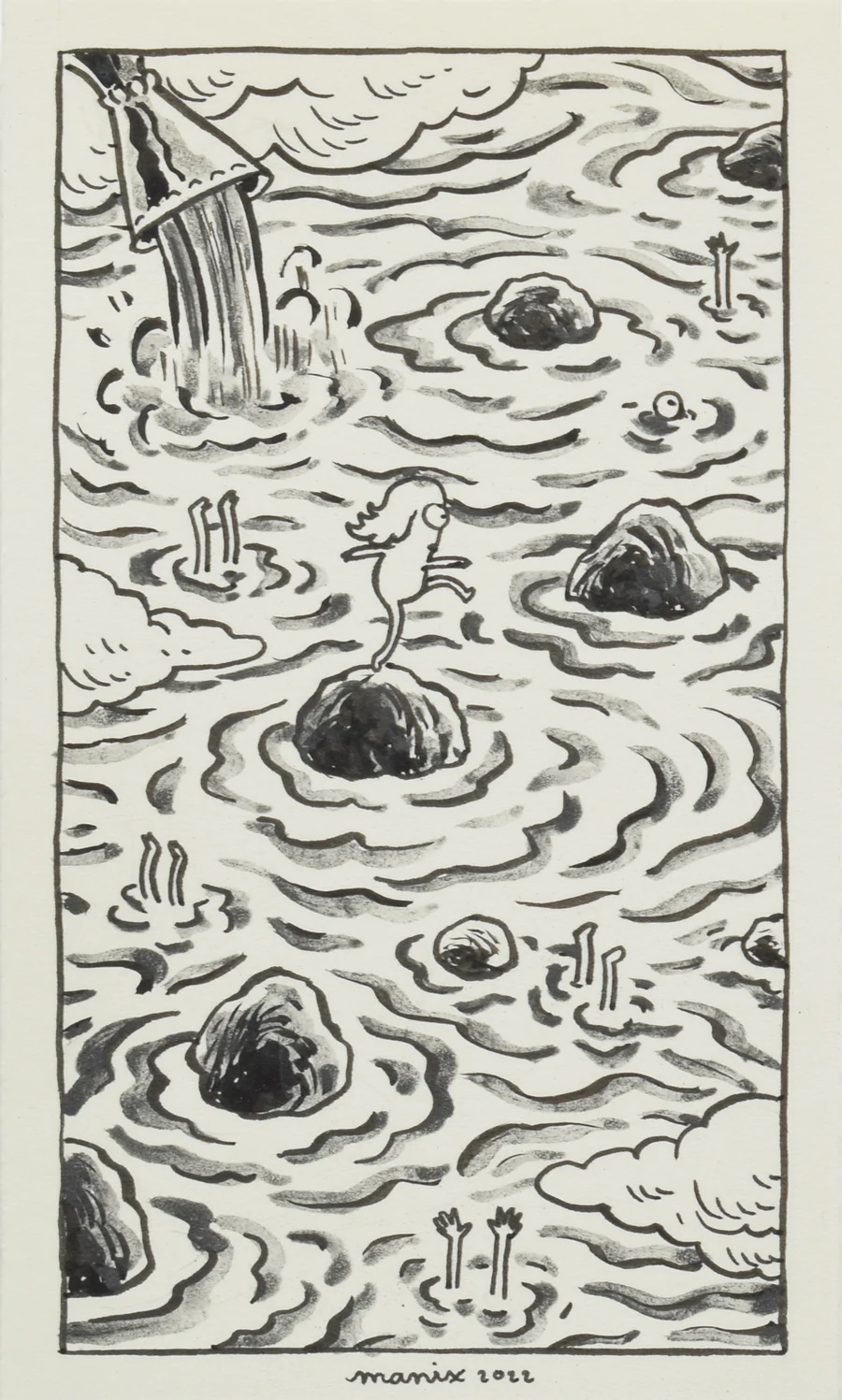 Abrera presents us with jocular depictions of the treacherous paths we tread from our beginnings to our ends. However, he does not do so as a salve for the unavoidable and helpless condition, but rather to demonstrate that it simply is one, and show, therein, the absurdity of it all.

There is no manual (besides a three-panel comic strip prefacing the show), and at Galerie Stephanie, the deck is splayed out, facing up. The rest is down to our intuition: to do with all Abrera has generously proffered, what we will. 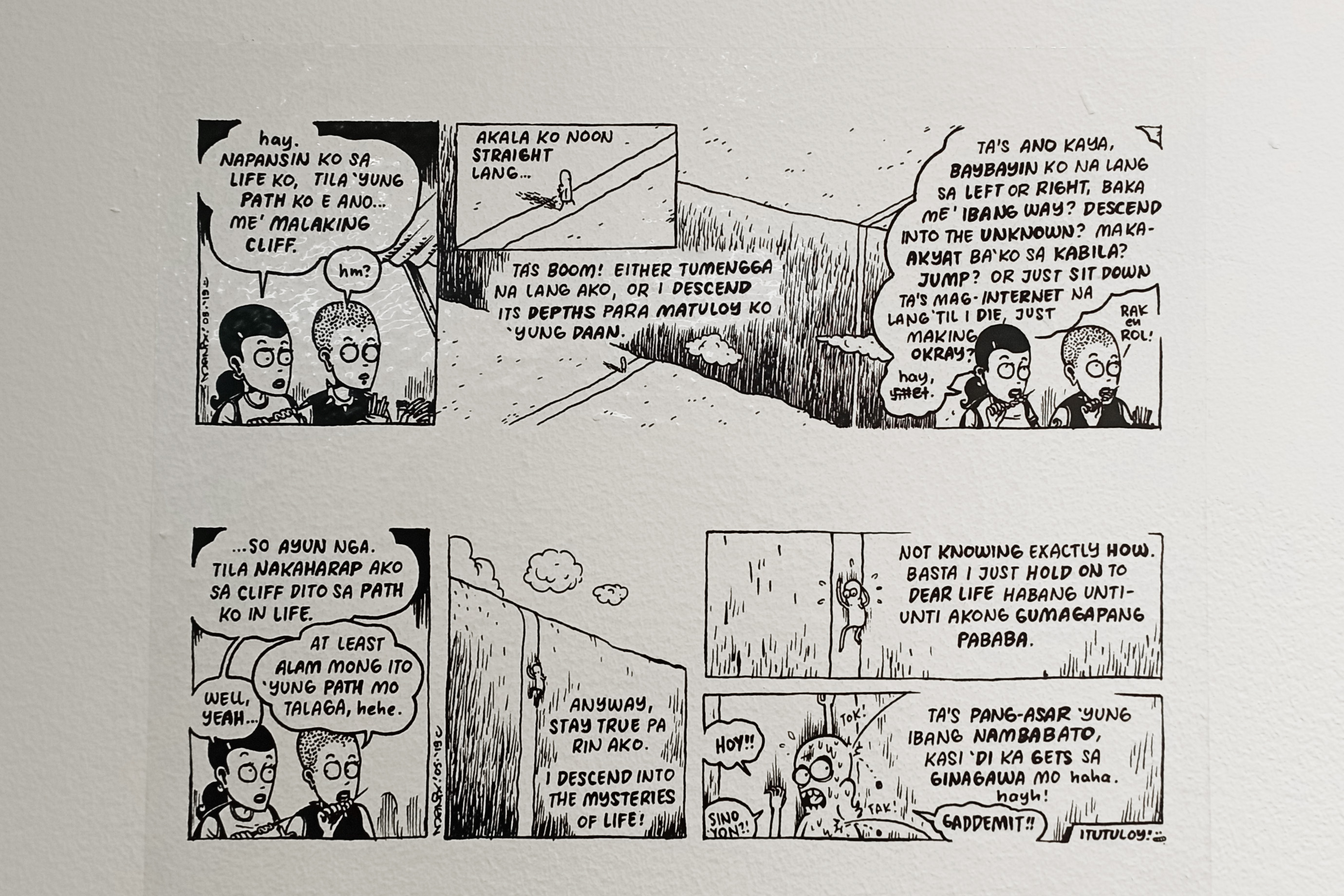 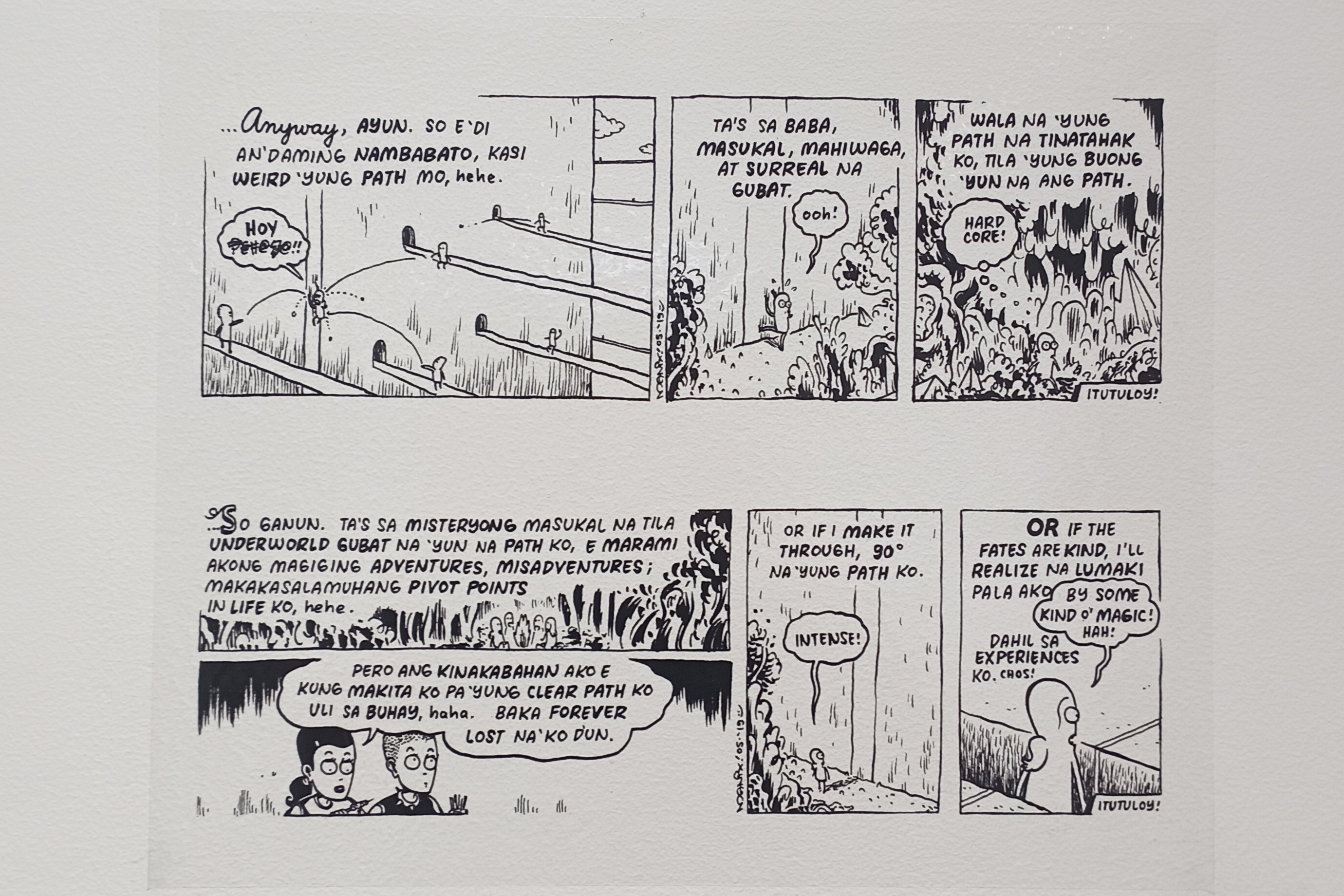 Whatever card or path, at one point, one might realise they’ve outgrown the course they had set out for. In which case, there’s always another way, riddled with its own obstacles and, with those, opportunities to grow further, to change perspectives, embrace certain paradigm shifts and find footing once again. As the protagonist of his comic strip walks on and away, enlightened but just as clueless of what’s to come as they were in the first frame, Abrera seems to impart one last life tip, an encapsulation of the cards’ lessons and messages: to simply ‘rak en rol’ with the punches. 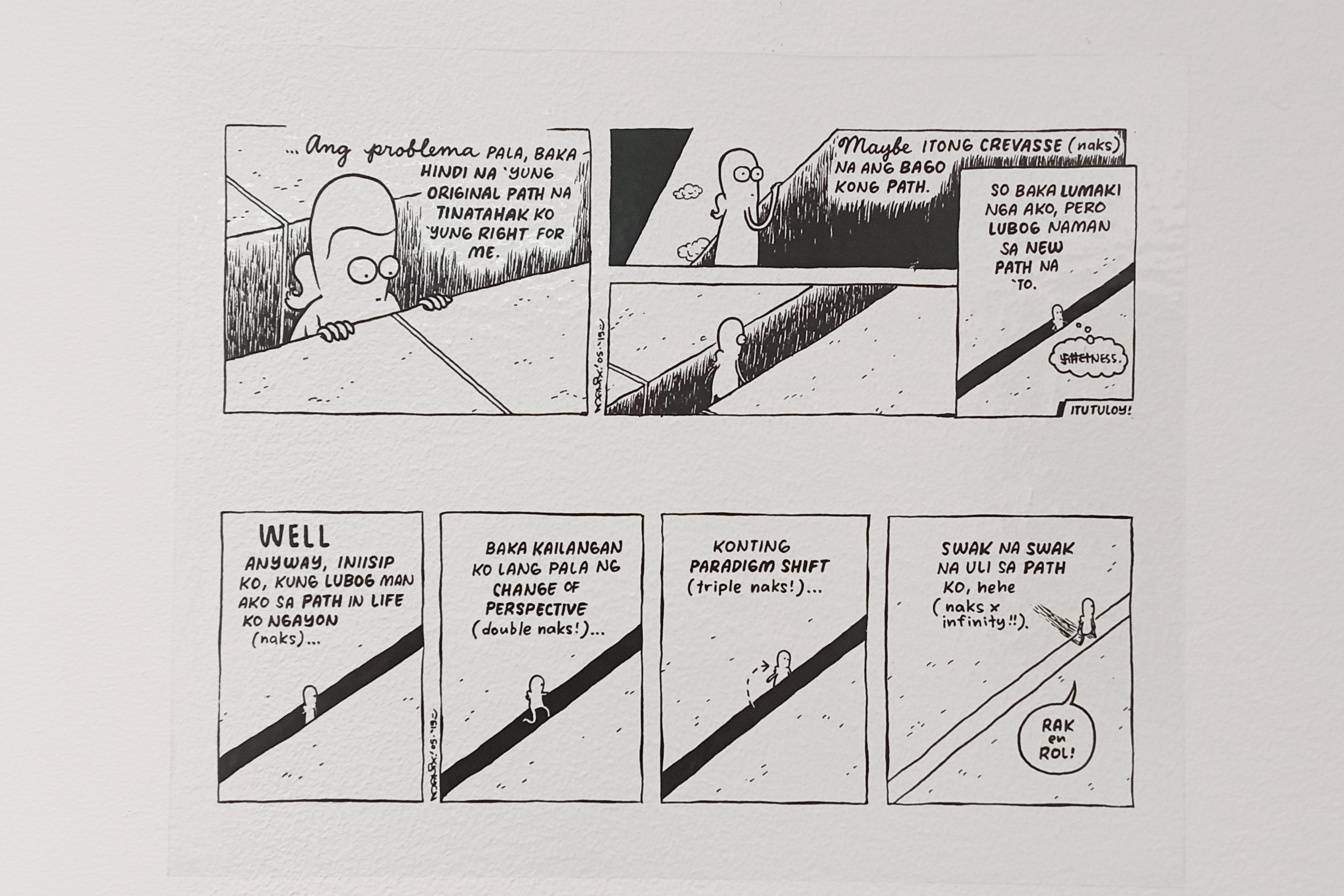 Tahakin continues at Galerie Stephanie in Mandaluyong City until July 19.