When the present doesn’t hold: Navigating time between times in Anton Mallari’s When Dusk Settles

Anton Mallari is known to paint as he pleases. Past exhibitions have seen him explore his style, as in Sinauna (Blanc Gallery, 2019) and Halimuyak (Blanc Gallery, 2017), or showcase his influences in punchy appropriations of works by European masters (BACK:TRACK, Blanc Gallery, 2015). When Dusk Settles, Mallari’s most recent solo show at Blanc Gallery, sticks close to these models and seems to synthesize them: here we have the female body and his distinctly European influences coalesce in a progression of meanings and references to the artist’s past, his current concerns, and what might come next.

Set against a series of major shifts in everyday life, from the global pandemic to the increasingly precarious geopolitical realities facing the Philippines, When Dusk Settles rests in liminal time, teetering on the sill between what was and what is to come, and the edges of the known and unknown. From the Latin word limen meaning ‘threshold’, liminality refers to the state or realm caught between two or more planes of existence. 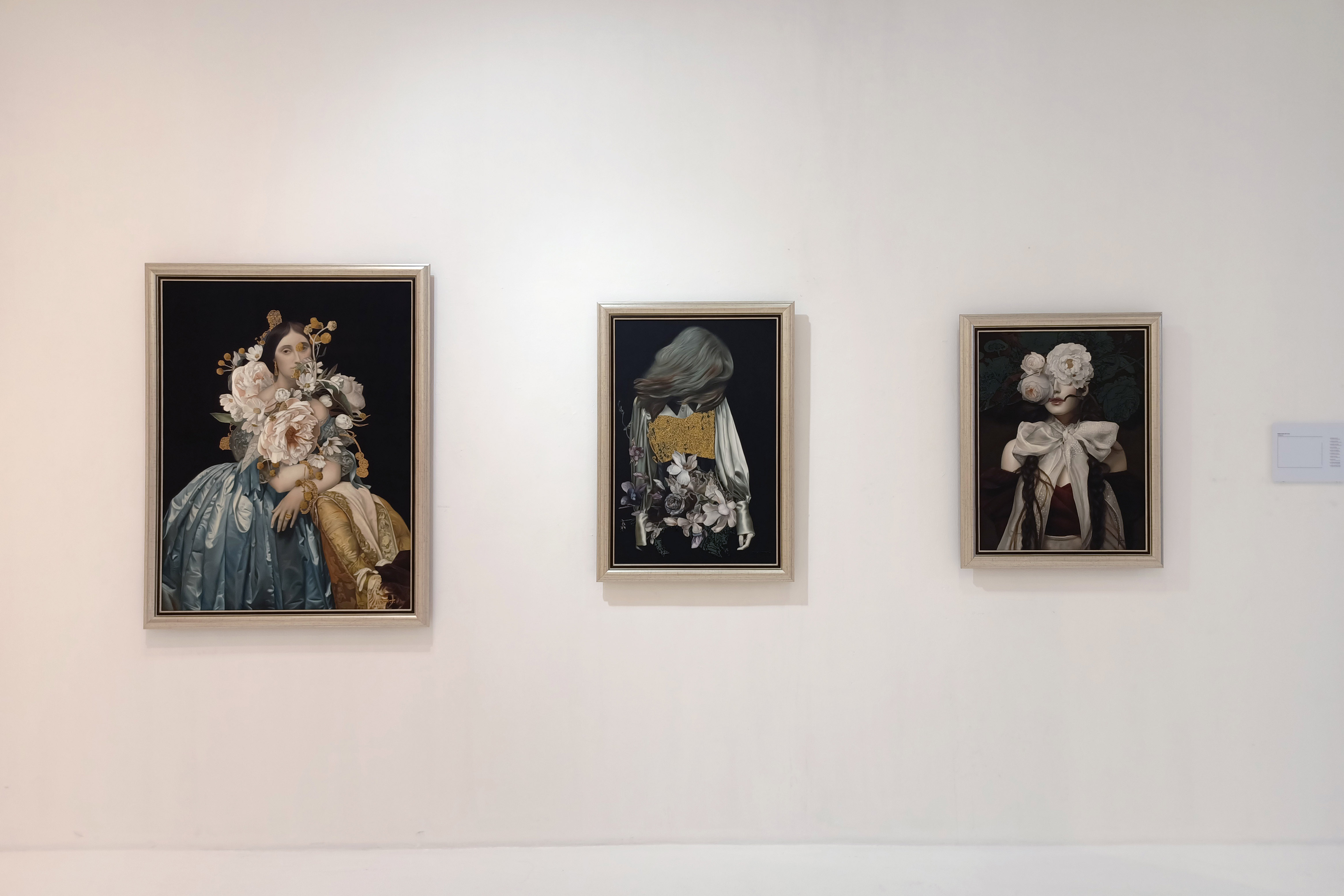 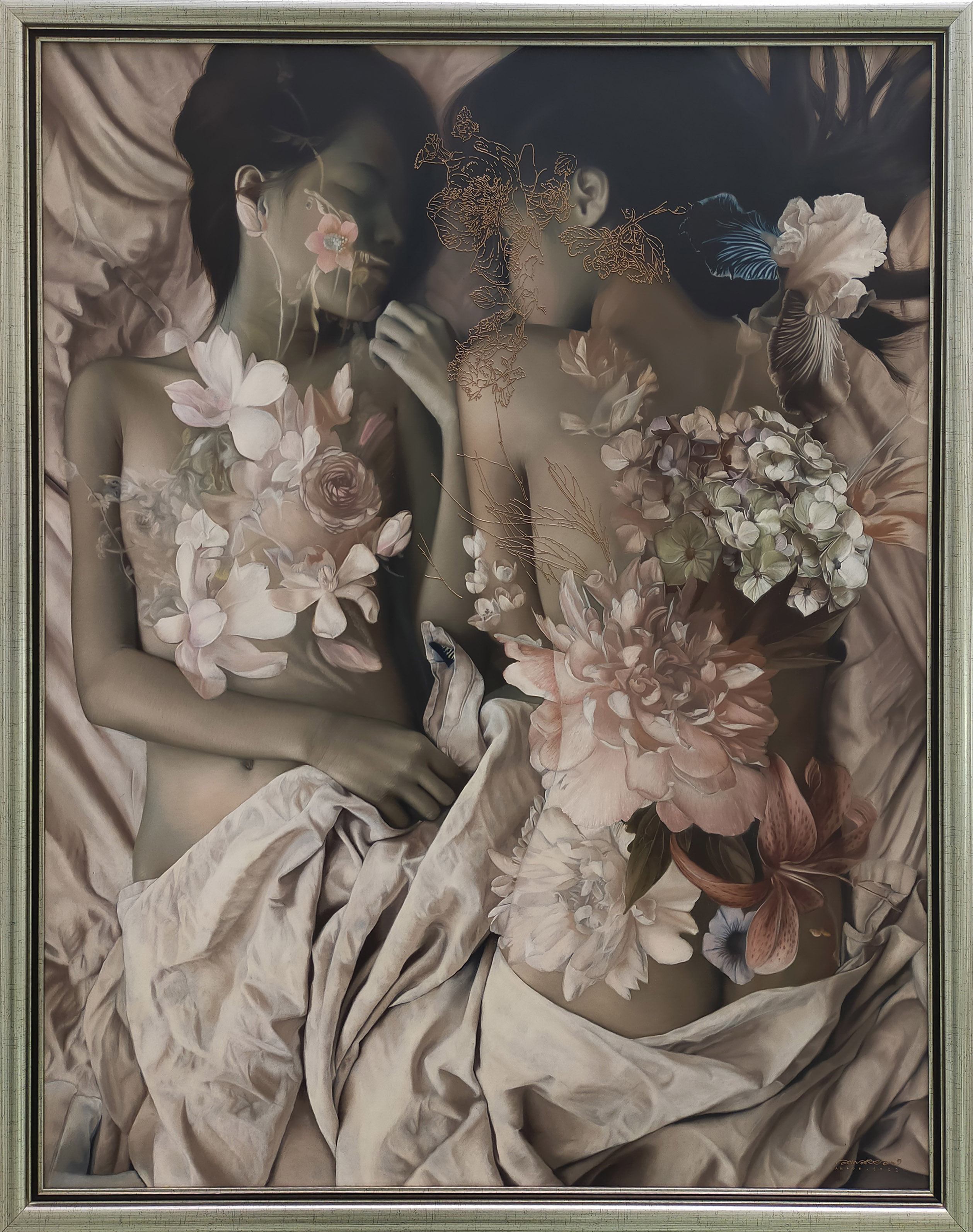 Second Thoughts similarly features two reclining figures. One is awake: the one, it seems, to be the subject of these ‘second thoughts’. We are not privy to these thoughts, nor the ones that preceded them. Turning away from both the viewer and her companion, Mallari makes the figure even more illegible with solid, gilded floral appliqués, like skeletal remains of those that had blossomed in A Recollection. More so than what, Mallari makes us wonder when and how she came to change her thoughts.

A Recollection of Youth sees two slumbering female figures. Their intimacy is forthright but the nature of their relation to one another recedes from the viewer. Their nude bodies are cloaked only partially by a bedsheet and illusionary, translucent flowers dotted delicately along one’s back and the other’s chest.

The musky palette, the creases and folds of the fabric — the marks of Mallari’s distinctive treatment of light and shadow — imbibe the scene with a palpable softness and fragrance. 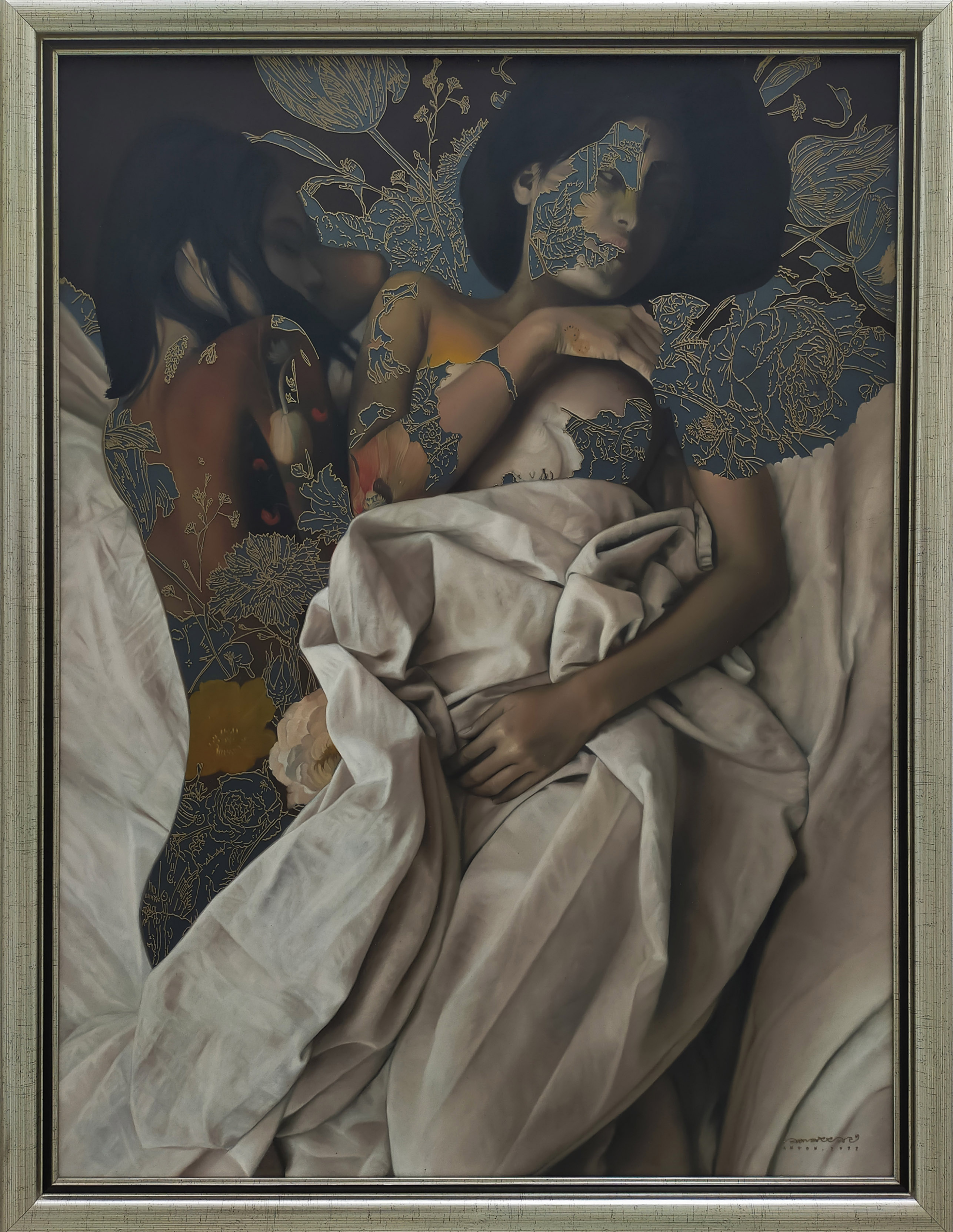 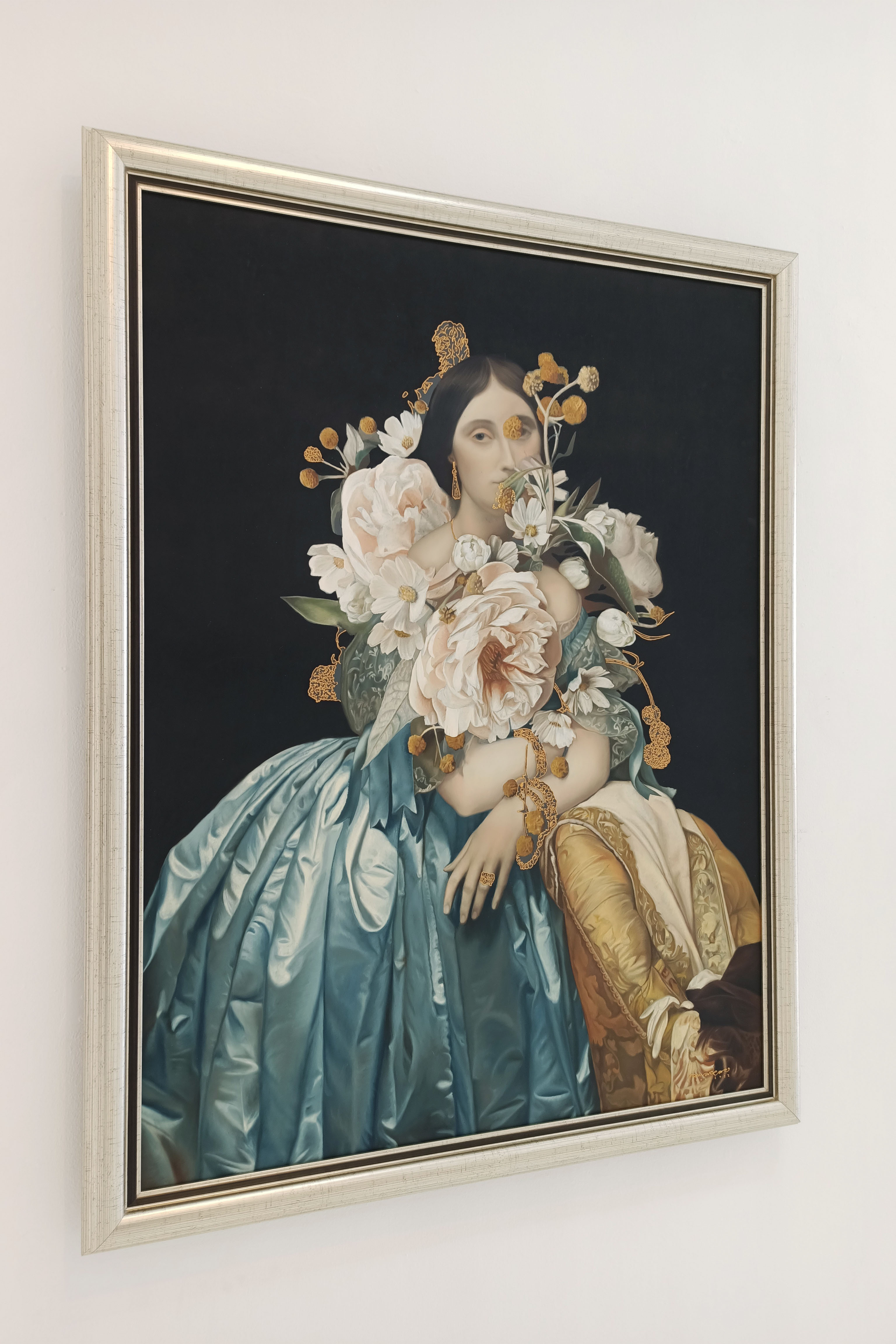 Reluctant Muse is of the few classical portraits in this collection. Apart from her partial obfuscation by the floral arrangement, it is difficult to locate the sitter’s coyness in the painting. Her soft gaze grazes the obtrusive viewer’s, whose attention she seems aware of and unbothered by, if only by the way she casually leans on the armchair before her. Her gown is a resplendent Marian blue, a pigment that historically had been reserved to devotional paintings of the Virgin Mary.

In contrast, and standing out among the in-bed portraits, the figure in Mapping the Moments is hidden almost entirely from the our gaze. Covering her is a giant white sheet, made more paper-like by the crisp crumples and folds that contrast with the wrinkles and creases of her rosy bedsheets. A faint, silver floral brocade envelops her like a metal cage. According to writer Nikki Ignacio, the work personifies Mallari’s “frustrations and observations of China’s increasingly forceful intrusions on Philippine sovereignty”.

Yet, her resting hands ever so slightly cast their impressions on the stiff material making it difficult to see signs of struggle. A reclining contrapposto is discernible in the curvature of her form: statuesque, her body remains soft and vital. 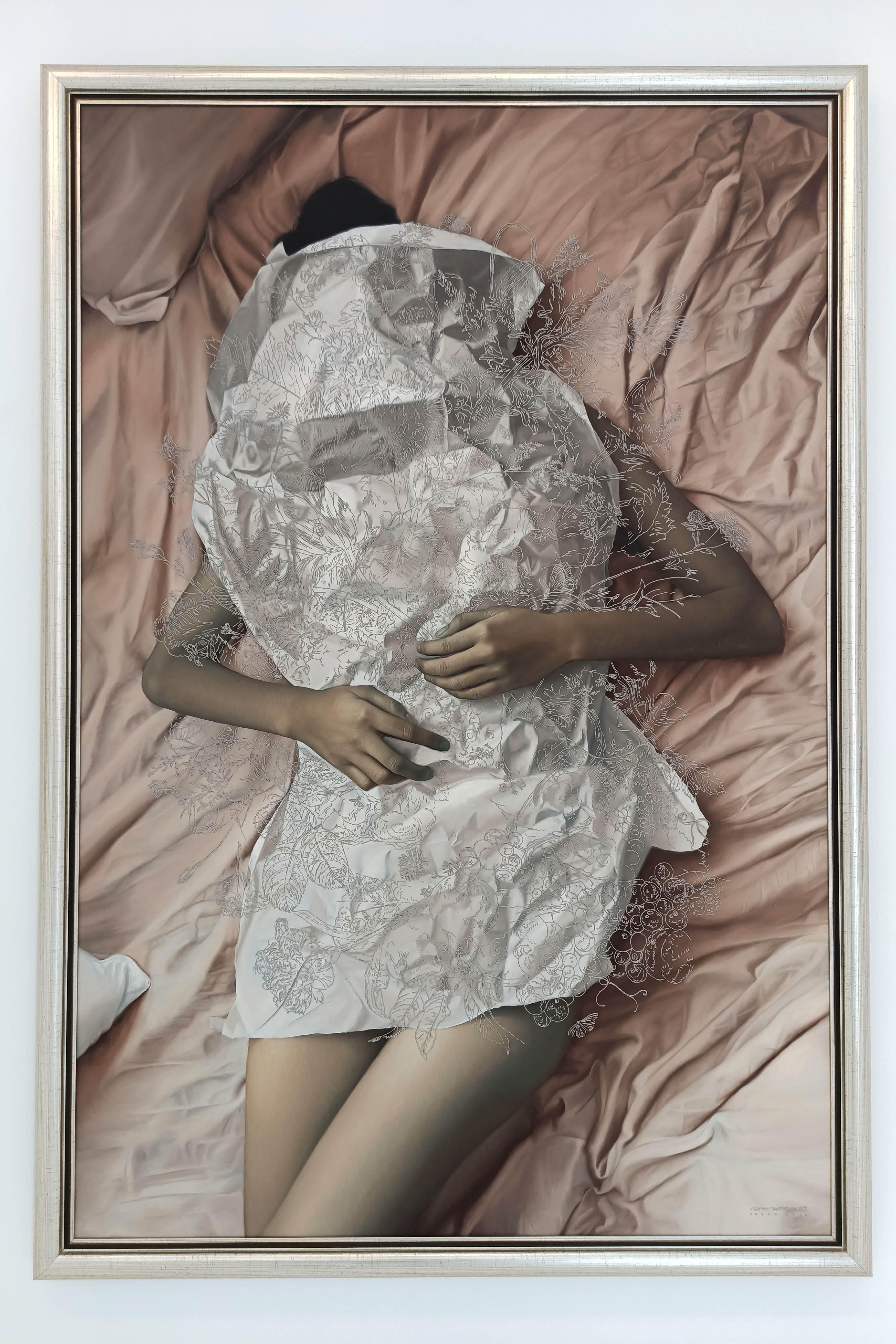 Although they have all the formal elements and contents specific to portraiture, they are dotted with the trappings of a classical vanitas. While lattices of knotting branches and sprouting flowers frame their faces, in Channelling Deities and Gilded Gaiety, critters crawl all over unblemished petals. As is characteristic of Mallari, there is an even chance that these were intended as either trompe l’oeil or memento mori. 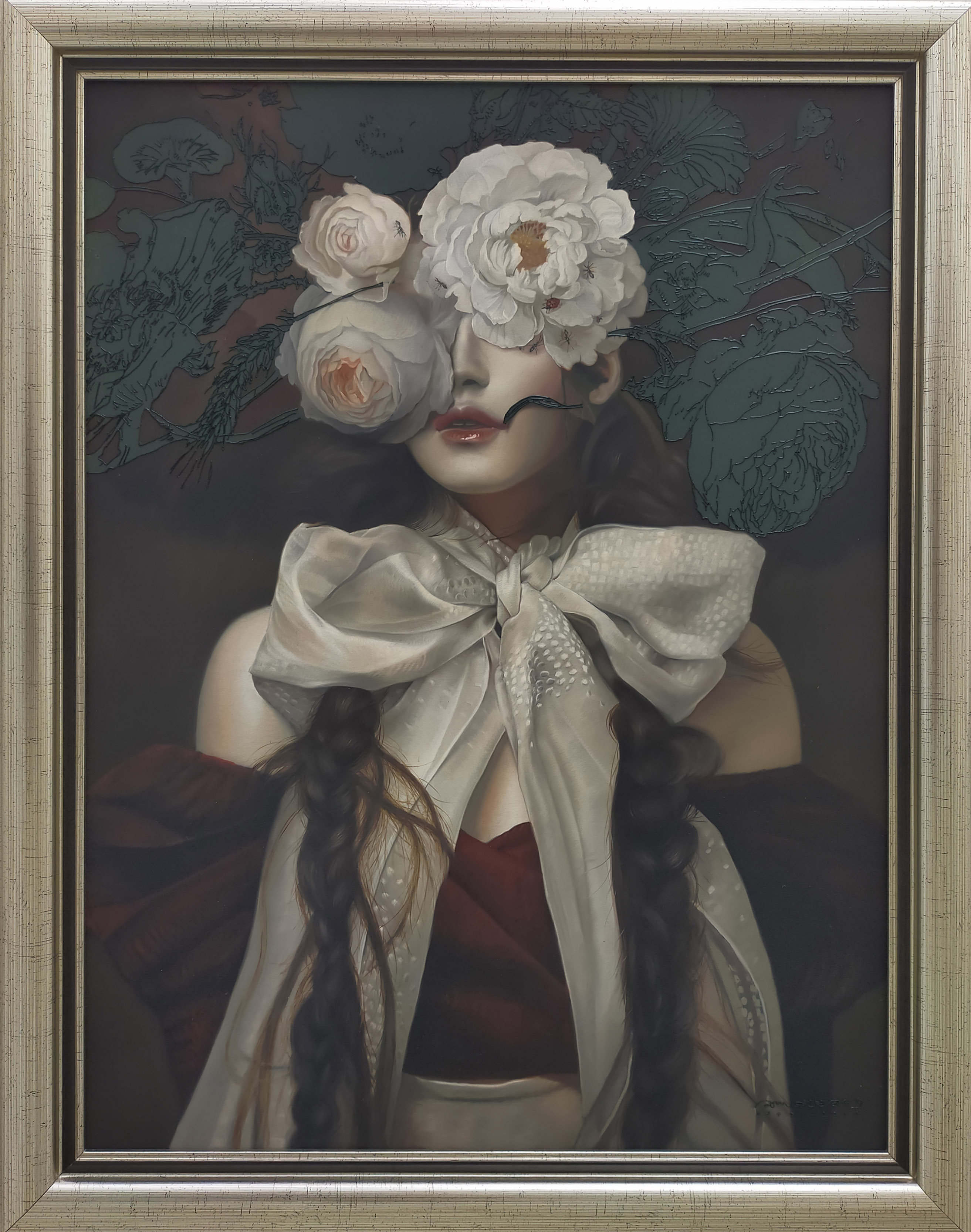 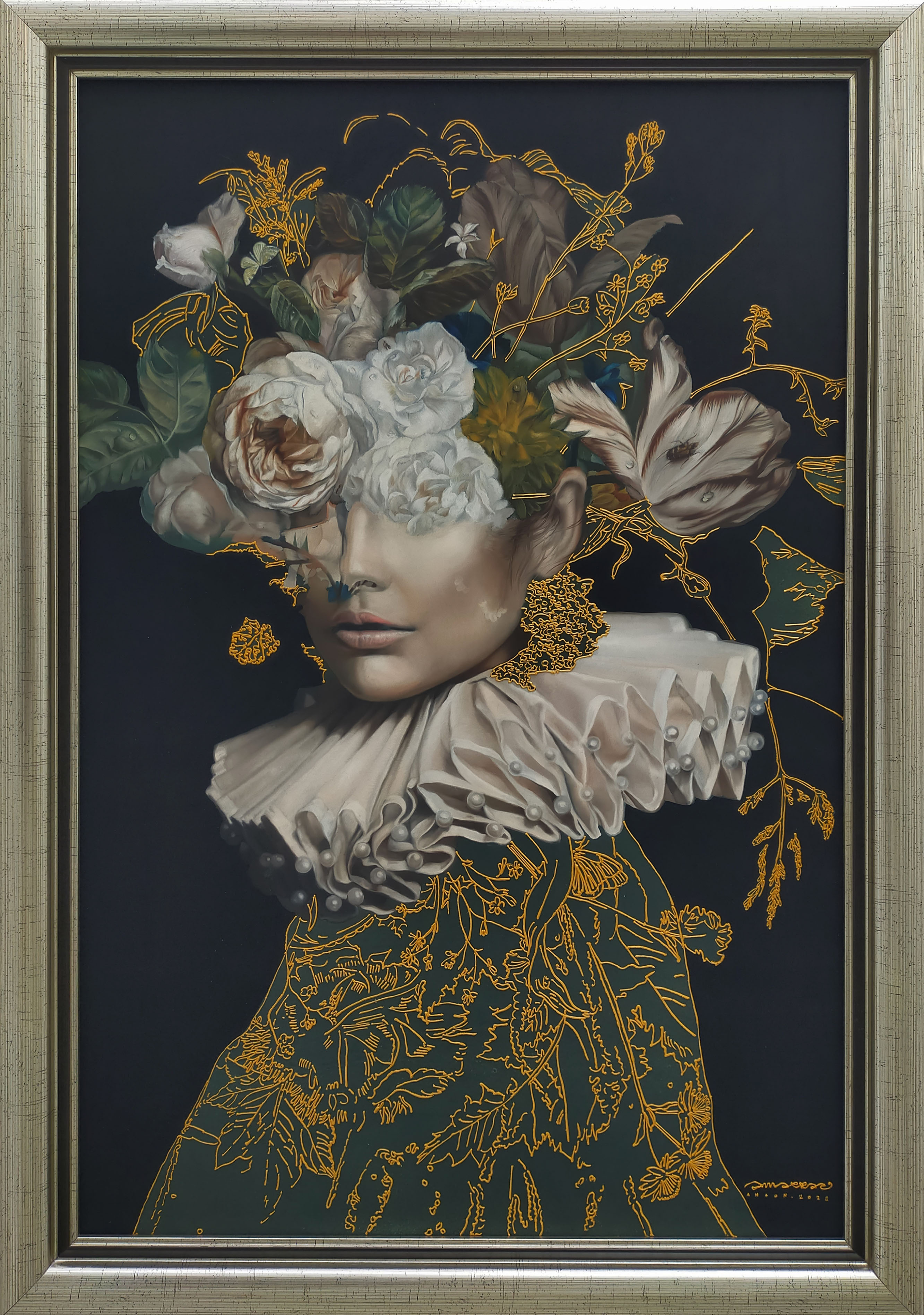 When dusk settles, ambiguity sets in with it. In Mallari’s works, temporal liminality stifles efforts to read the sleepers, sitters and situations. Notwithstanding the undeniable cadence of his visual articulation, what we see remains illegible, obscured, resistant to full understanding. 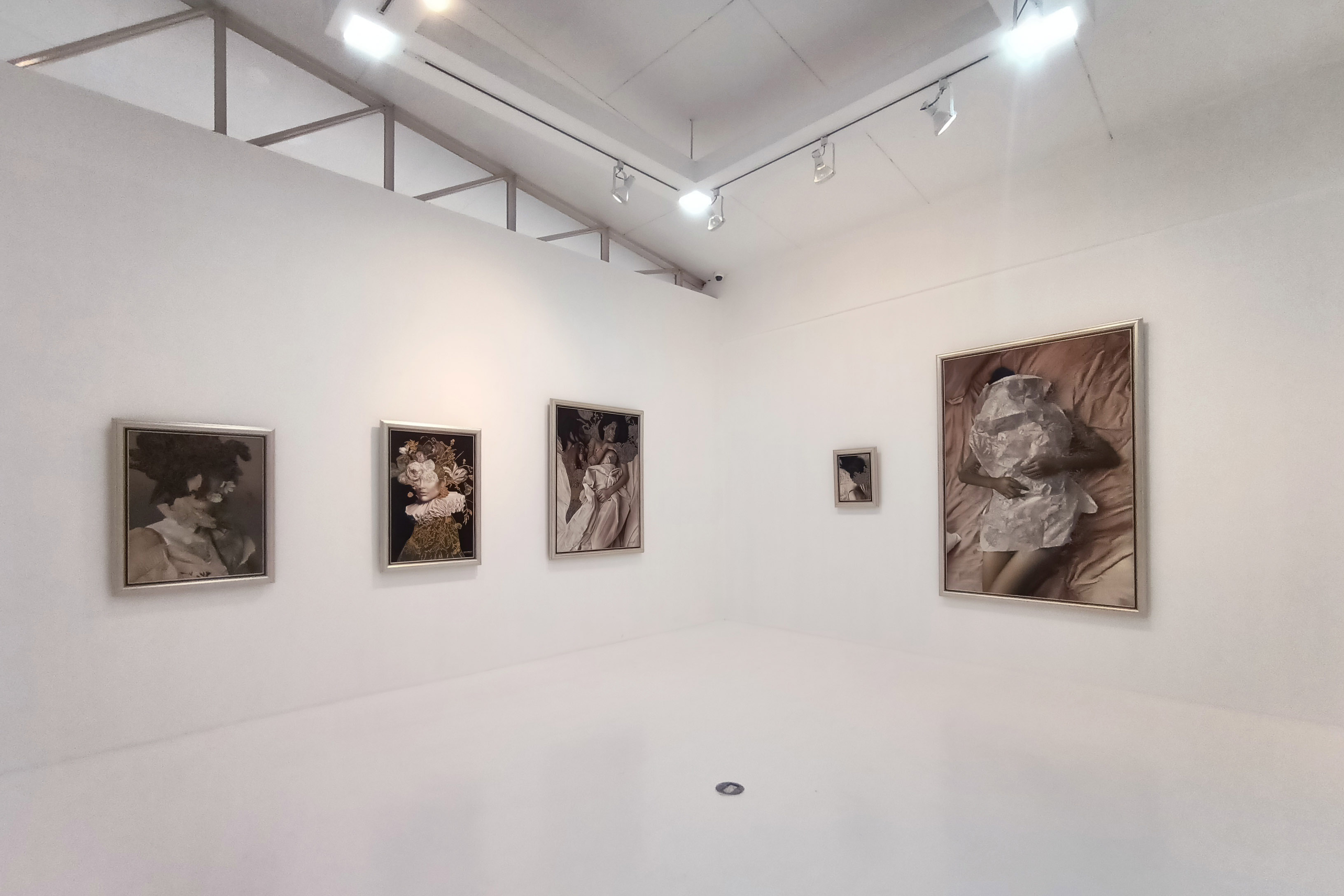 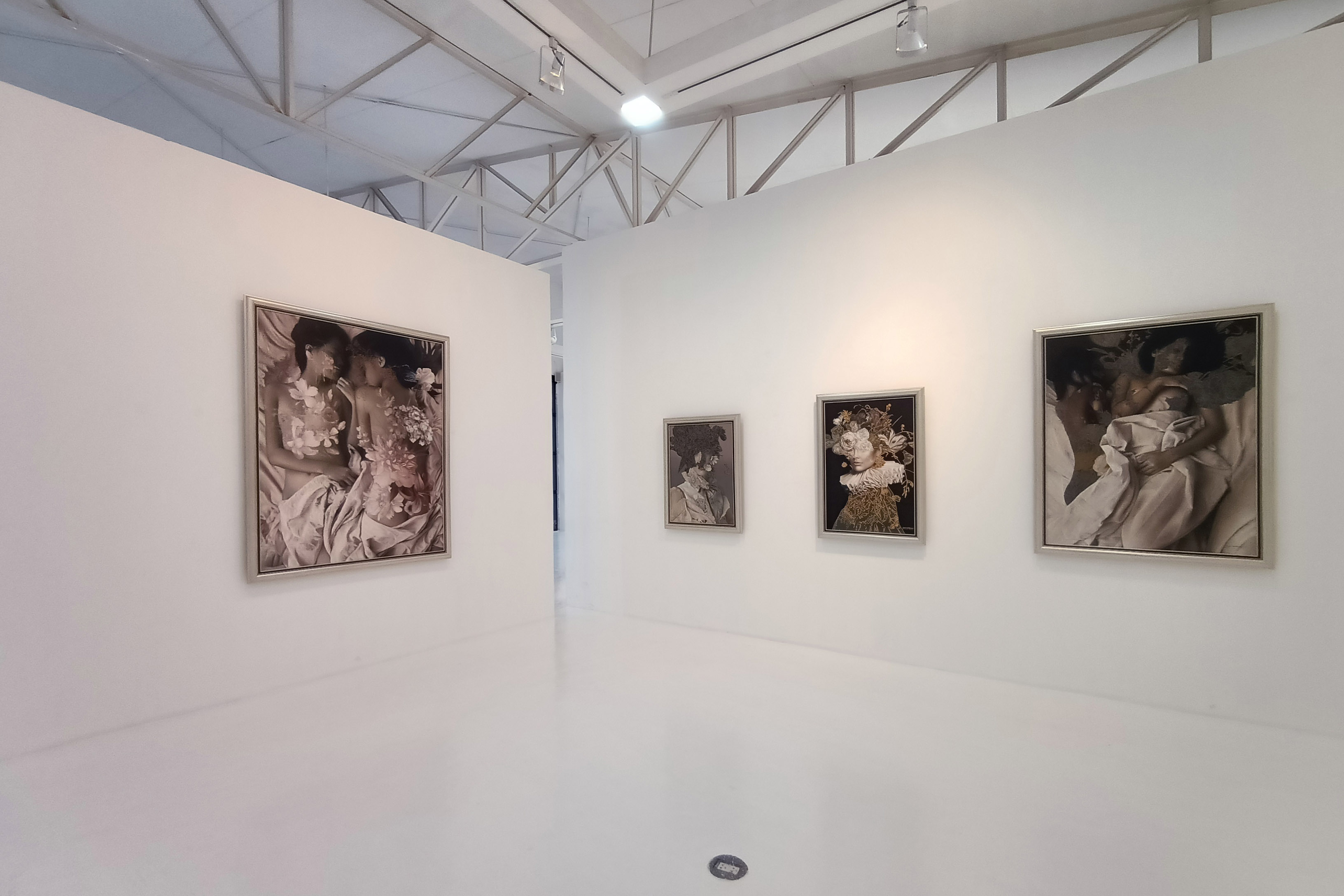 In Mallari’s delicate compositions, the silence is frustrating and the stillness is stifling. We are stuck in the time between times, waiting to see if, when and how it will pass. To begin to understand this, we may go back to the title: how When Dusk Settles primes us for this liminal condition.

As Ignacio, the writer of the exhibition notes, relates, it is a play on the idiom ‘when the dust settles’, used to refer to what happens after a period of intense activity or excitement. The replacement of ‘Dusk’, the darkest point of twilight, the threshold between day and night, may refer more directly to Mallari’s preference to work when the world outside has all but ceased its daily activities, when the quiet descends and he can paint uninterruptedly. However, it is in the gloaming that the mind, the haunt of misgivings and twisted meanings, opens up to be rummaged and turned over and over. Even the relative adverb ‘When’ stirs ambiguity, pointing to an instance, a time that is both inevitable but ultimately unpredictable. Lastly, ‘Settles’ also carries multiple meanings, beside referring to a liminal state in itself (the act of moving places). We may at first take it to refer to what happens after the fact — what happens after dusk — but Mallari could very well be referring to dusk itself settling, like an unannounced visitor come to stay. 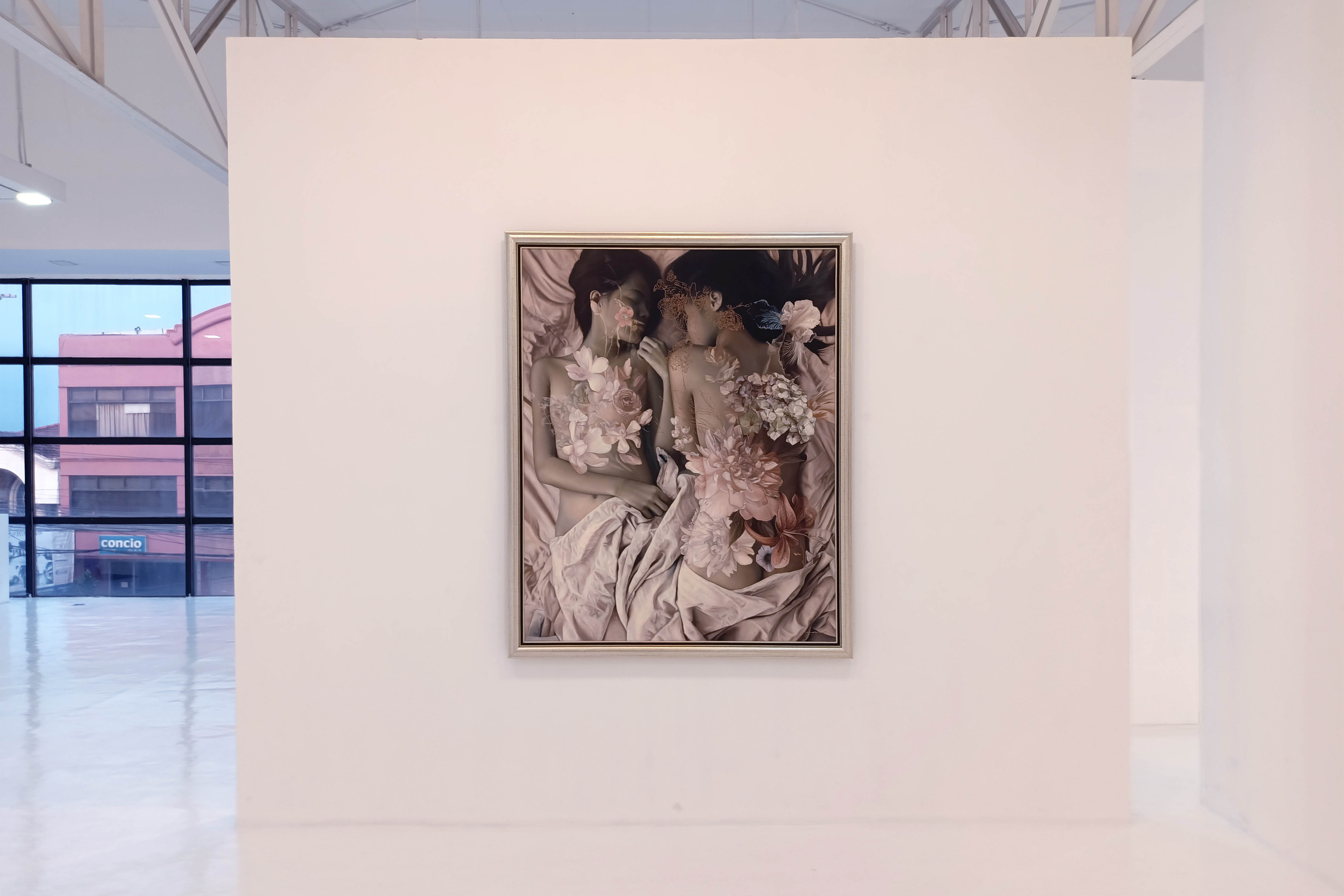 So often, viewers encounter artworks and their subjects in medias res, where and when there's promise of time and so many possibilities. We come upon Mallari’s When Dusk Settles in the denouement, awaiting a resolution and the end. However, of all Mallari chooses to make clear in this collection, it is the certainty of darkness, withering, and second thoughts.

His fifth solo exhibition at Blanc Gallery, Anton Mallari’s When Dusk Settles is on view until June 25.

Special thanks to Nikki Ignacio. Images courtesy of Blanc Gallery.