Renz Baluyot’s Anthem: A Song for the Adrift 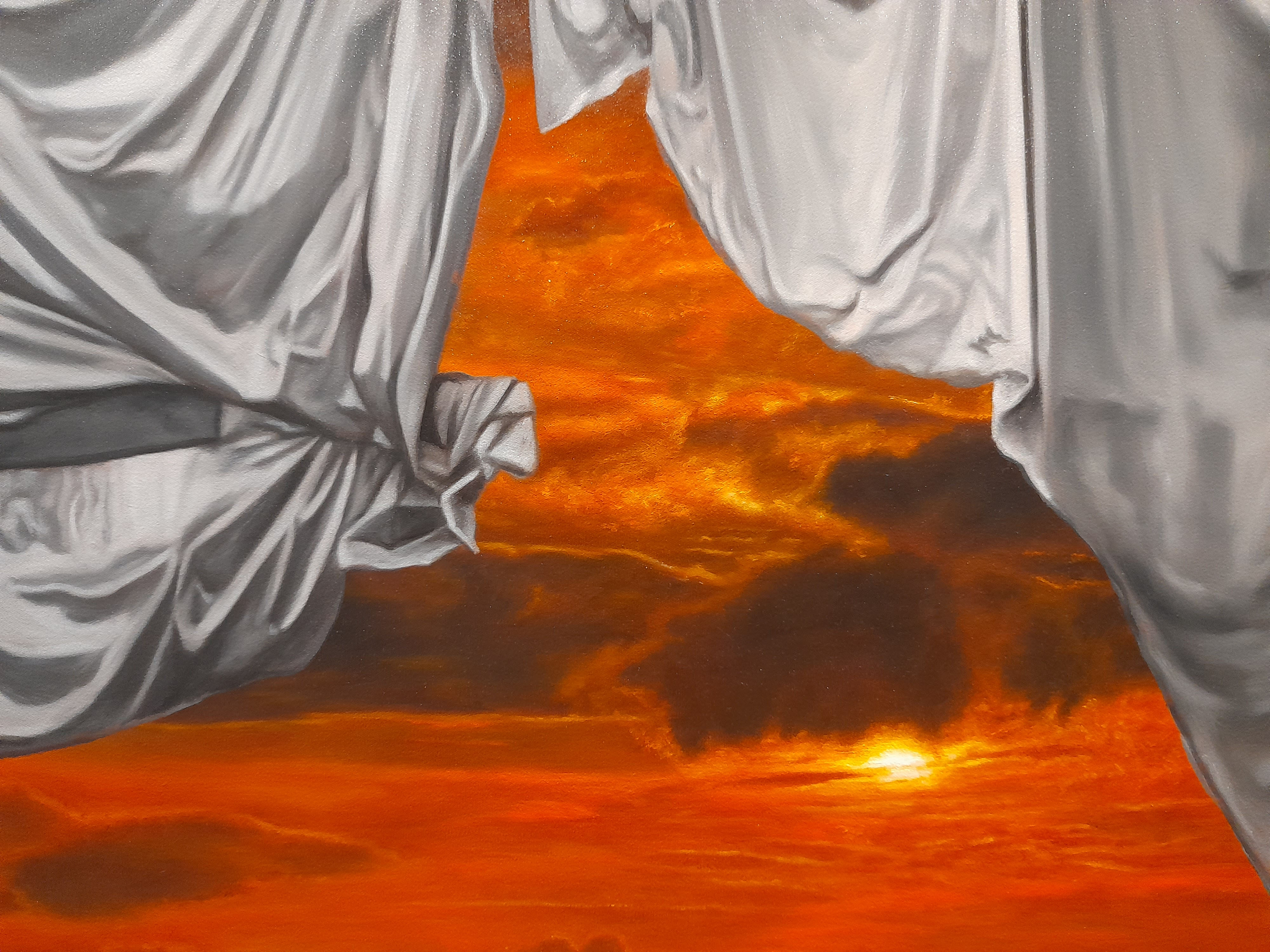 The notion of an anthem seems to be one both fixed and in a state of flux. It symbolizes a character both fundamental and intrinsic to its subject, and yet the said subject is one that continuously evolves. Personal anthems change with the seasons. Cultural anthems are both timeless and transient. National anthems consistently shift contexts within a country’s history. Often, we turn to music to capture what words alone cannot. In these moments of introspection, what are we seeking to collectively express in the anthems we sing?

Permeating Renz Baluyot’s solo show Anthem is an ambience of contemplation. Juxtaposed against intimately rendered skyscapes are seemingly larger than life configurations of tapestries, obscuring objects and taking on a physicality of their own so that subject and background coexist instead of gradating into each other. Viewers are caught in- between the silence of the clouds and the mesmerizing enigma of each covered silhouette. Both visual planes are rendered with striking distinction, yet formalistically appear not too separate from each other, engulfed in waves of detail and fluid in the makeup of their forms. With our minds up in the clouds, Baluyot may be posing a question of focus — or perhaps, on a more thematic level, one of meaning. Of finding meaning and clarity in the grander scheme of things. 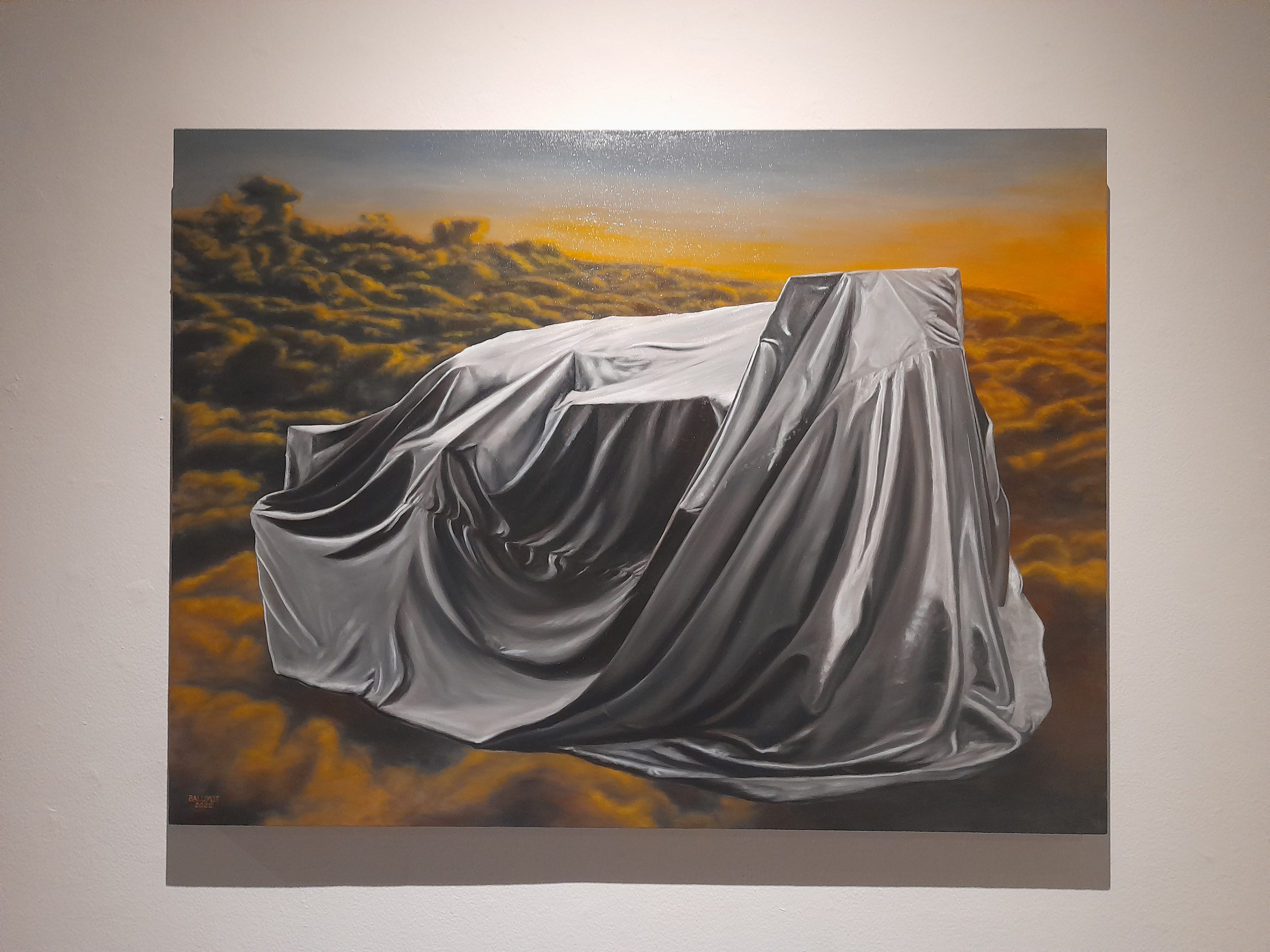 It's a testament to Baluyot’s skill that he is able to evoke such abstract themes in works where formal elements are highlighted so prominently. His emphasis on value, color, and form makes his works appear to float between the realms of realism and abstraction. As a result, we fluctuate between finding these visuals familiar and unknowable. In Warm Cradle, one may see the form of a cozy couch, yet the seemingly unpredictable undulations in value may say otherwise. Detail in Baluyot’s works is held close to heart but at the same time kept at an arm’s length so that more than describing form, his starkly- defined tapestries possess a dramatic character more intrinsic to themselves than what they may be representing or hiding. 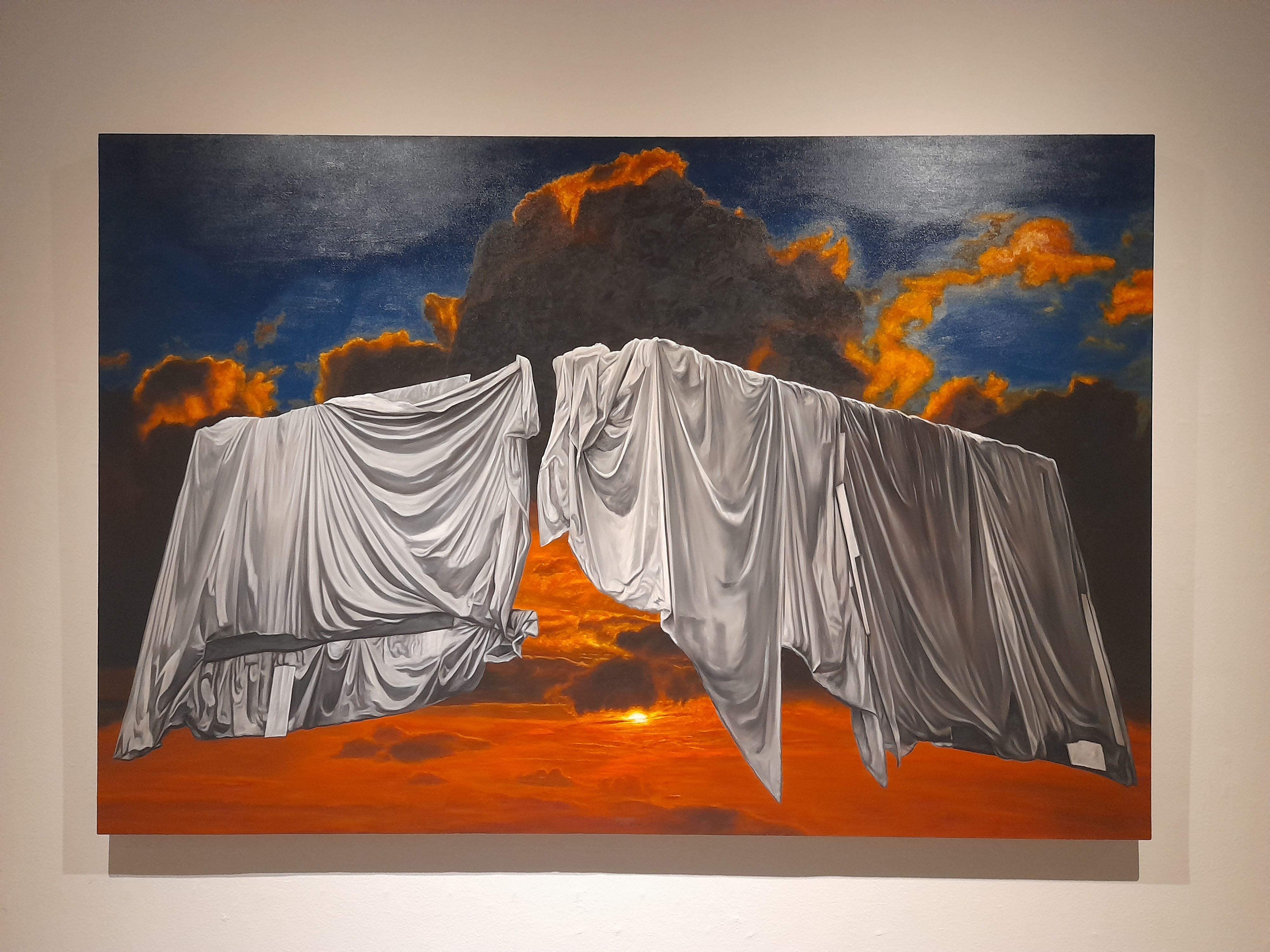 Part of this character is reflected in the color palette. Warm and cool hues recall opposite ends of a spectrum, and these works seem to conceptually exist in the in-between. In the largest work in the series, similarly titled Anthem, the canvas is divided into two sections — the deep blue upper horizon with billowing backlit clouds, and the fiery orange lower horizon where the sun peeks through. Bordering these two horizons are the floating fabrics, delineating an invisible corner meeting right at the center of the canvas, where the highest cloud looms overhead and the sun shines below. The black and white marks the center of this spectrum — a place where we can project our own meanings onto these elusive trappings. It’s notable that in most of the works, the setting remains ambiguous — are we witnessing sunrise or sunset? Our days are bookended by these quiet beginnings or endings, after which flags are lowered, and as in the two works To Appease the Horizon (Sky) and To Appease the Horizon (Sea), we relinquish our search for purpose to forces beyond our control. 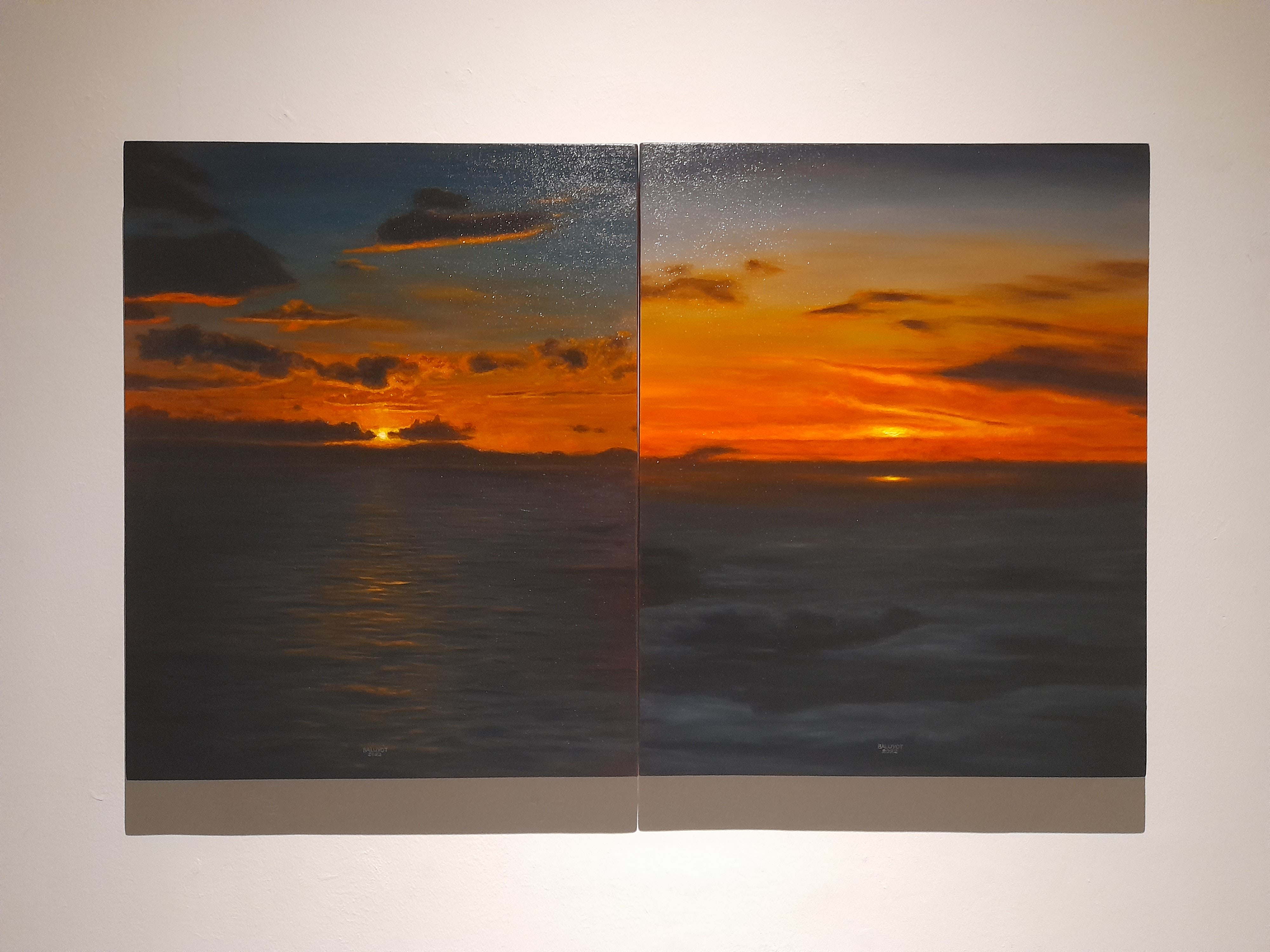 "Perhaps the end of a narrative is the beginning of an anthem," Gwen Bautista writes in the exhibit text. The start of the anthem may signify the continuation of such a narrative in another form. Some may be more intentional; others may be a product of circumstance — all signifying a collective call for meaning. Baluyot is an artist who works with subjects centered on urbanization, decay, and political oppression, using images he takes himself or draws from his studies on historical archives. Having been raised in Saudi Arabia and working from different areas of the Philippines, he engages with themes of identity and history, tackling them through visual narratives that seem both culturally unique and universally experienced. Through an anthem, these experiences find a shared place; both a focal point and a broad umbrella with which they may take cover. 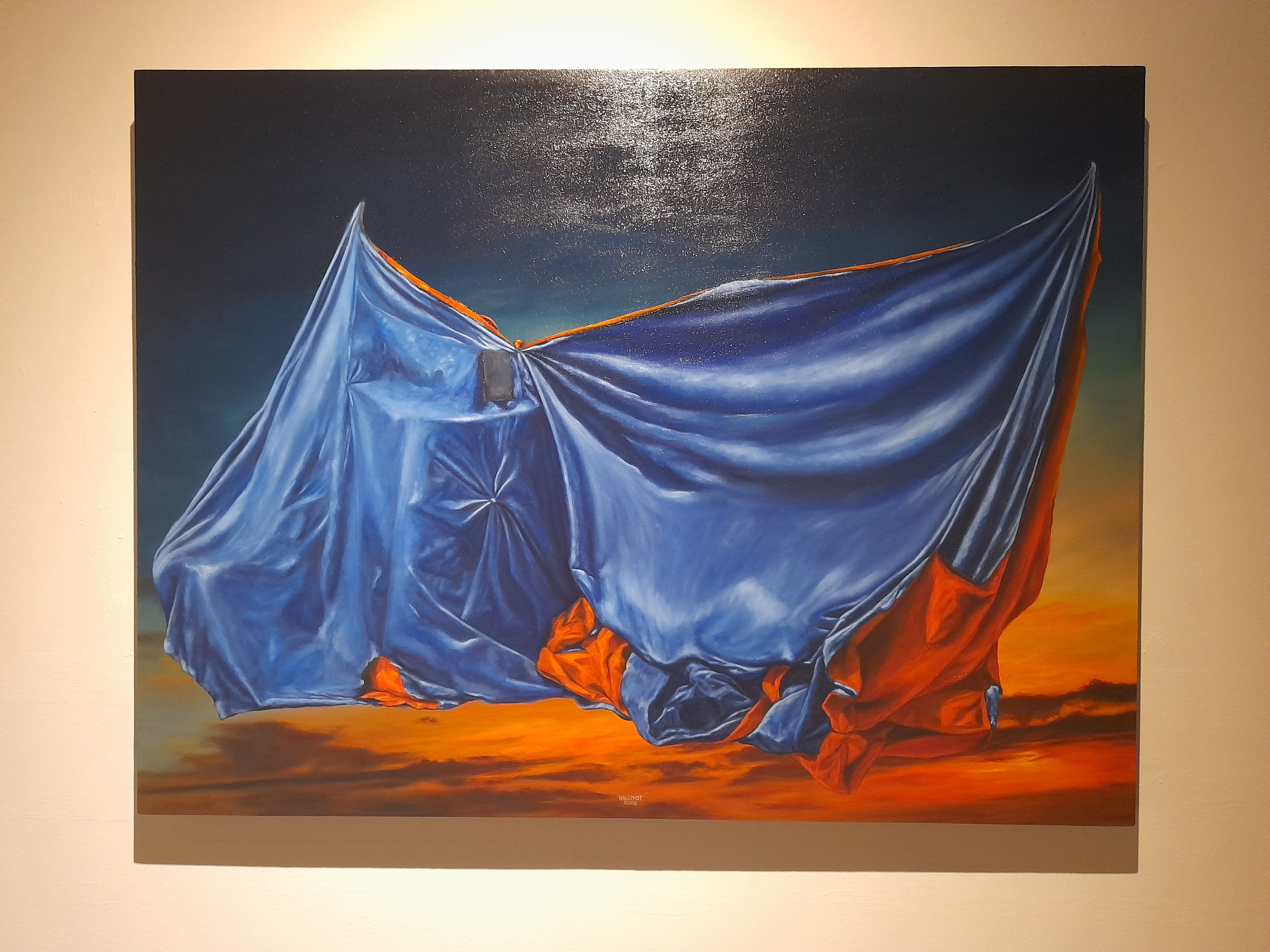 One might wonder at which point the form of the anthem itself – the mutable fabric – may take precedence over what ideas they hide. In Fearless Flight, the only colored tapestry depicted in the series, notably resembles a tarpaulin, blue and orange and as regal as its sky backdrop, yet carrying with it the cultural connotations of such a ubiquitous yet thankless object. Perhaps within Baluyot’s works, we can find some comfort in trying to define the ineffable and take refuge in the moments that stir us into song. Within our anthems, within the overlapping boundaries of the personal, the historic, and the cultural, is a renewed hope for future ends and beginnings alike.

Anthem by Renz Baluyot runs from May 25 to June 15, 2022 at Underground Gallery.