Tanya Villanueva Shows Us There Is No Beauty in Violence

The name of Tanya Villanueva’s latest exhibit, ‘Beauty is A Basic Right’ is in itself a kind of pronouncement. Depicted as lush, natural landscapes in generous hues of green, each painting attests to a form of beauty she wishes to tackle.These do not intend to capture mawkish sentiment, but the contrary: they reveal a conviction, a wish. Perhaps she is trying to tell us that each of these is fundamentally ours; in the aesthetic sense, we are free to claim it, but so, too, can it be encroached.

What catches the eye once you walk into West Gallery are scraps of canvas hung delicately between her paintings, almost like altar decor. From afar, they appear like vines, each one embroidered with beads and mother-of-pearls, marked with pressed flowers and leaves. This ensemble, called Mutual Aid Forever (Invoking the Spirits of Our Ancestors through my Mother’s Pearls, My Sister’s Beads and All Our Paintings from Source Canvas), carries with it a proposition political in nature. Mutual aid is precisely about creating a symbiotic relationship of care and support for each other. Villanueva writes, “My work, my income, my resources are not only for me. And if I want to be a part of the future I should start shaping its existence everyday through small, attainable ways.” 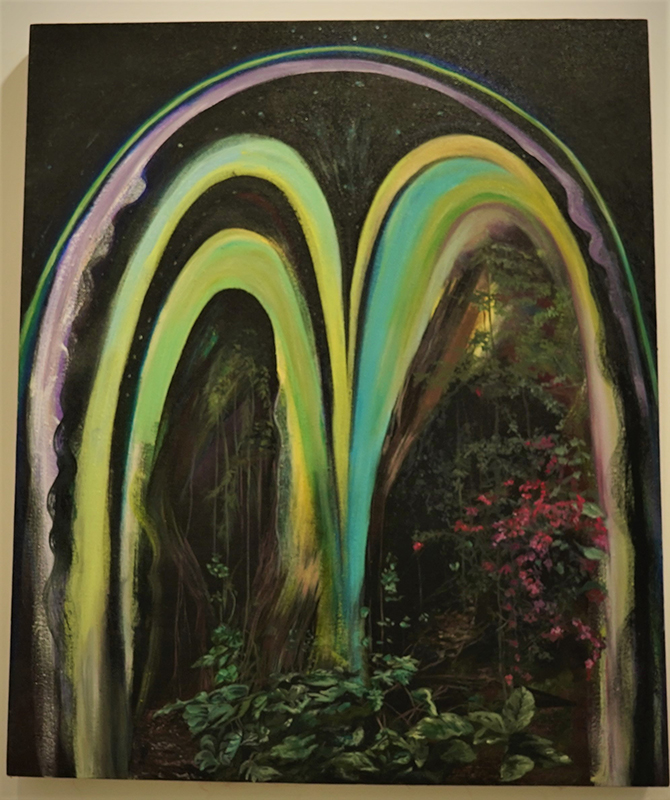 Her paintings are named after indigenous groups in the country, prompting anyone who views the exhibit to reach for context. In Hustisya sa Gubat ng Kananga, there is a faint and limited suggestion of color, seen in the magenta overgrowth of a wild species of flora. Above are threads of color extending to the sky (the upper section sprinkled with powder blue specks against darkness, intimating stars) and outwards to the forest from what we surmise is a hundred-year-old tree. Because of this particular depiction, we have to ask, what happened in the forest of Kananga?

It tells the story of beauty in precarity. We learn of ethnobotanist Leonard Co, slain on Nov. 15, 2010, while he was on a restoration project in a forest in Kananga town, Leyte. He was collecting samples of “mother trees” when soldiers of the Philippine Army rained at least 245 bullets on Co and companions, allegedly mistaking them as members of the New People’s Army (NPA). Over a decade later, justice remains elusive for the scientist who in 2007 founded the Philippine Native Plants Conservation Society.

There is no representation of conflict, no body wearing a brown vest, black slacks, boots (as Co was described to have worn that day) for the spectator to study; there is, instead, a hint of divinity, an unshakeable peace. Reproduced here, we can safely gather, is the mother tree in question that beckoned Co to the forest. As told by the ecologist Suzanne Simard, “Mother trees are the biggest, oldest trees in the forest. They are the glue that holds the forest together. They have the genes from previous climates; they are homes to so many creatures, so much biodiversity. Through their huge photosynthetic capacity, they provide food for the whole soil web of life.” In Villanueva’s piece, broad strokes of delicate pastel hues of the garden variety illustrate the sustenance in nature that was the subject of Co’s research; the wonder to his eyes.

Ecologists are the first to discover that forests are not a collection of isolated organisms but webs of constantly evolving relationships of multispecies organizations. They also function in a system of mutual aid: “They share resources and information with one another through an intricately interconnected network of mycorrhizal fungi that colonize trees’ roots.” Simard maintains that the people of aboriginal cultures knew about these linkages and interactions and how sophisticated they were. Our ancestors navigated this complexity way before science managed to evolve from the simple to the complex. “They are not brains, yet they have all the characteristics of intelligence: the behaviors, the responses, the perceptions, the learning, the archiving of memory,” Simard further implores. By dedicating this to the delayed search for justice in Kananga, Villanueva memorializes Co and his work. 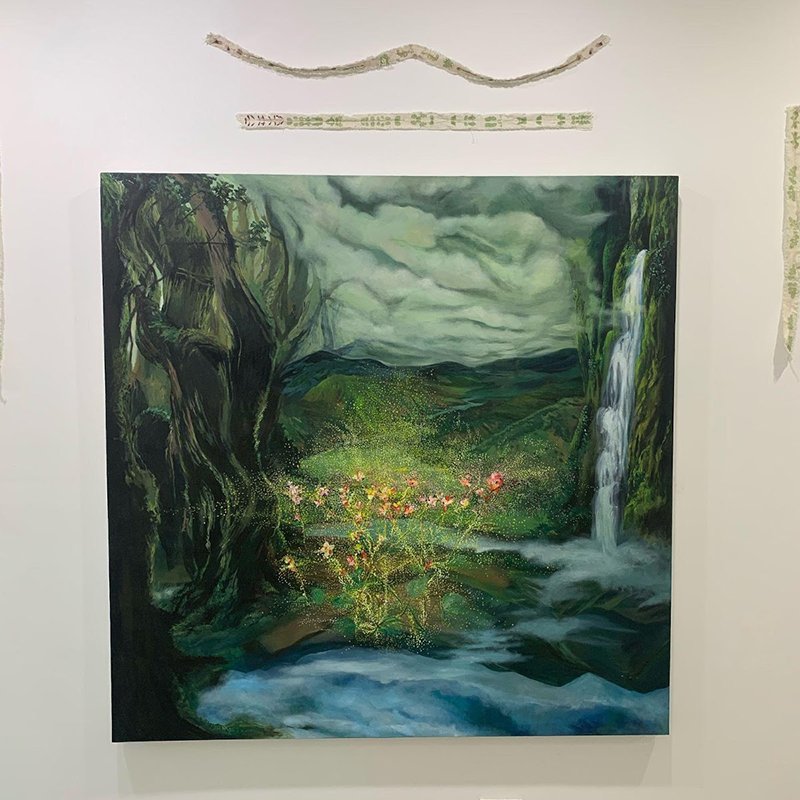 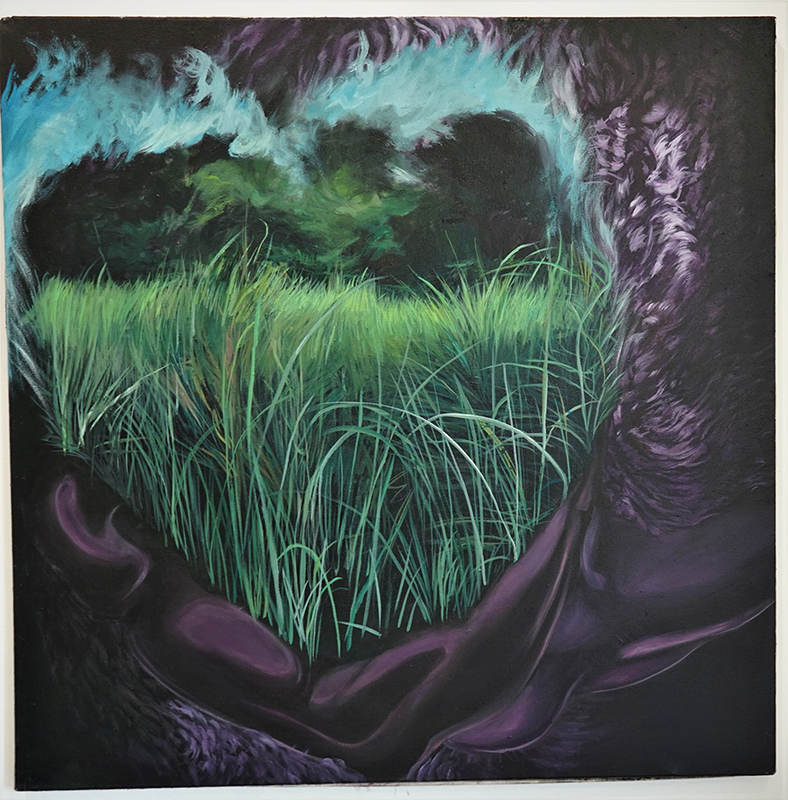 In Sa Mga Tumandok references the Tumandok, or the Panay Bukidnon tribe, known for their strange and mystical practice of “bukot” in which they hide their beautiful females believing that this gives them the magical powers of the Babaylan, a healer of extraordinary gifts with the ability to mediate with the spirit world. So revered was the Babaylan that she would only be taken out to dance and chant under the moonlight come sowing season to ensure an abundant harvest. In the painting, this mysticism takes the shape of a delicate cloud of windswept pollen suspended about a cluster of flowers in uncertain ground. We only know of the violence from further reading: on December 30 last year, the nine leaders of their tribe were massacred while policemen served search warrants for firearms and explosives in their town. The Tumandok leaders fought against the construction of the Jalaur Mega Dam that would leave the agricultural lands and houses of 17,000 Tumandok individuals submerged in water.

Ng Mga Dumagat  is about the semi-nomadic people living in the Sierra Madre. Their knowledge of the environment and ecology is unlike any other. “They are familiar with at least ten varieties of gabi, six of cassava, sixteen of sweet potato, eleven of bananas, and thirty-nine of rice, eight of which are glutinous. Traps such as balaes (for wild hogs) and pakuis (for monkeys) are used [to hunt]. Bows and arrows with catapults and darts are some of their devices to hunt eels, mudfish, wild chicken, birds, shrimp, and other animals. A poisonous plant species called kamaysa that bears green, berry-like fruits are pounded and scattered in the fishing spot in the river to temporarily paralyze and thus easily catch the fish,” anthropologist Daisy Noval-Morales writes for the National Commission for Culture and the Arts.

Their story seems to be cut from the same cloth: when the pandemic began, they fought over control of their ancestral land against the Kaliwa-Kanan-Laiban dam project that had been revived under Duterte’s Build, Build, Build program. Around the same time, Ime, an indigenous Dumagat, was detained by the 80th Infantry Battalion Philippine Army on accusations of being a member of the NPA. In the piece, we see what the people of Dumagat see: a distant patch of land from behind an enclosure of trees. 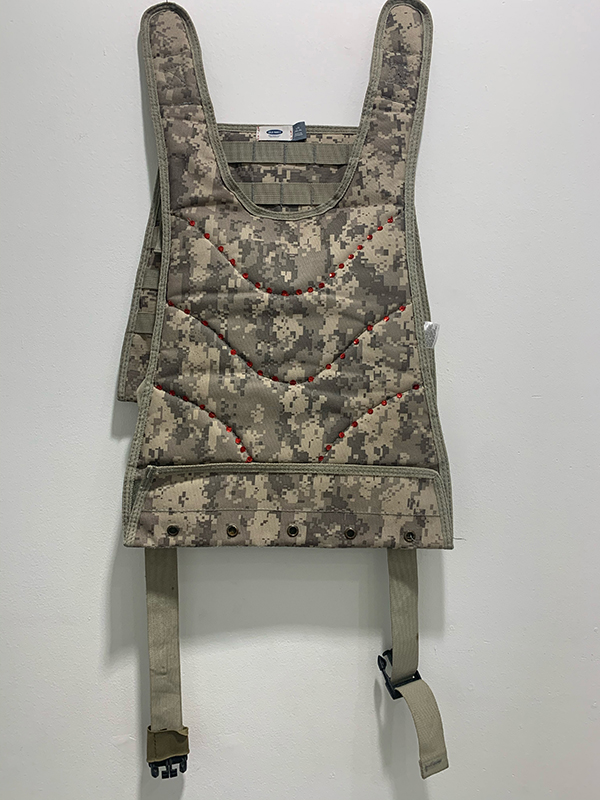 Artifact (In the future, you will get paid to be tender and take care of the flowers). Protective camo vest, sequins, Old Navy label tags, threads Variable. 2021.
Delete

Each painting documents dignified acts of preservation. As a whole, it can be an intimate portrayal of the ongoing histories of these indigenous tribes and the wars waged against them, a battle to secure rights to their ancestral fields, forests, and rivers which are the material basis for their culture, history, and livelihood. From the words of an Igorot warrior chief, “And where shall we obtain life? From the land. To work the land is an obligation, not merely a right. In tilling the land you possess it. And so land is a grace that must be nurtured. Land is sacred. Land is beloved.” Through ‘Beauty is A Basic Right,’ Villanueva envisions a world no longer defaced by senseless violence; the landscape itself safeguarded by once-soldiers that have now become its most pious and sympathetic caretakers. Villanueva suggests that the only way we can survive, reclaim a form of beauty, is to mirror trees; be members of a vast, intricate society of mutual aid and interdependence with nature and each other.

Retrospectively, Villanueva has been known for her use of glitter and jewels to adorn artworks to process hard emotions like anger, neglect, hate, and disappointment. In a more recent piece posted on her Instagram, How we exist together, she adorns her daughter’s face with jewels against a backdrop of complete darkness, “It was me making time to put her into the light. Me looking to answer how I can uplift the both of us in these dark dark times.” In Artifact (In the future, you will get paid to be tender and take care of the flowers), Villanueva embellishes a protective camo vest with shining red sequins, a tongue-in-cheek remodeling of an object unconcerned with beauty, only concealment.

This vest is used in Ang Utopian Soldier (created with Olive Villanueva and Nomida Nuda), a single-channel video piece that runs for 7 minutes and 38 seconds, where we witness a soldier’s sole mission: to surveil the growth of each foliage, ensuring that every fraction of an inch is growing as anticipated. They walk the terrain aimlessly, at times pausing to notice slight shifts in the breeze. Here, beauty is left unencumbered.

Tanya Villanueva's show, Beauty Is a Basic Right, continues at West Gallery until May 22, 2021. Part of the proceeds of sale will go to the benefit of the indigenous groups referenced in the works.

All images taken at West Gallery, courtesy of Enzo Angeles.

Editor's note: Zea is a contributor for CNN Philippines and author of the zine, Strange Intimacies: Essays on Dressing Up and Consumption. Tap here to buy her a coffee.