The Ghostly Recollections of Koki Lxx

Not all art has to be immediately gratifying, to which Koki Lxx’s Ghosting offers an admonition. It is unshakeable disbelief that has one linger in the show space, and the longer one does, the more strongly the effects turn out to be as the title implies. It is not ghosting in terms of doleful loss, but rather in the sharp remorselessness of the act that has one begin looking at the glazed stoneware ceramics askance. As if the art had, quite literally, ghosted you.

On exhibit were thirty studies of fired drapery, simulating the fall of cloth over various objects. Two of the works are mounted on the wall across the entryway; the rest are clustered on a waist-high table with a length half of the narrow, windowless room. There’s nothing beneath these pieces. Their titles are curiously omitted onsite, as are the reference objects. The works themselves are empty containers, an unnerving morass of guises: the shapes are at their most discernible from the top downward; the further down where the cloth cascades and crumples, the sharper the register becomes to the eye tracing their figures that it had wandered into a visual moratorium. A delay. 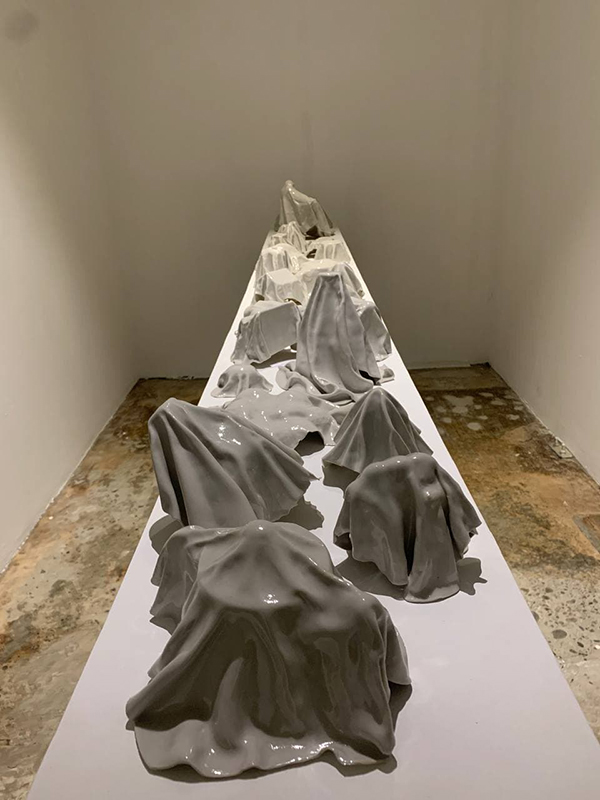 The play of light refines the ceramics’ edges, casting shadows between the folds, and to add to this troubling depth is that the works appear depleted of color. In that plainness, an allusive silence shrouds the room. It is unyielding. It resists all turns toward positive recognition, while the options to placate the arising discomfort of viewing something so obstinate quickly nil. It’s one accomplishment for an artist to reveal process, it’s another to see that what had been exhibited is the gulf of a thought being thought through, the means by which art unfurls as untenable.

Accompanying the show is a digital zine, comprising photographs of the reference objects on a plinth. By that point, though, it hardly matters. The reveal, for me, was aggravating: it takes advantage of your credulity, that kind of false reconciliation one jumps at while under duress. The works are hollow, tougher than eggshells and just as thin, and while it certainly demonstrates a fastidious process, these formal qualities the show uses to sustain itself bespoke fragility as an idea, too - how quickly thought enters, comes partially in view, and remains there, already dissolving.

In other words, it’s delicate: try to grasp any harder and something might just break. It is a reminder that Ghosting ceaselessly demonstrates; sentimentality never quite did help with seeing things squarely.

Ghosting by Koki Lxx continued until April 6, 2021 at Vinyl on Vinyl Gallery﻿.