The Everyday Allure of 'The Thing Is'

Gathered and hung at Artery Art Space until 24 October are the unnoticed, the unseen, and the overlooked. Exploring the object’s role in everyday life as it becomes a thing of meaning, The Thing Is hosts a suite of paintings as scumbling still lifes, porcelain plates with hardened drippings, a thick wad of cash thrust center, and many, many more. On the whole, the group exhibition achieves that marvelous effect when nuanced works you presume aren’t art at first, become it at a jolt. 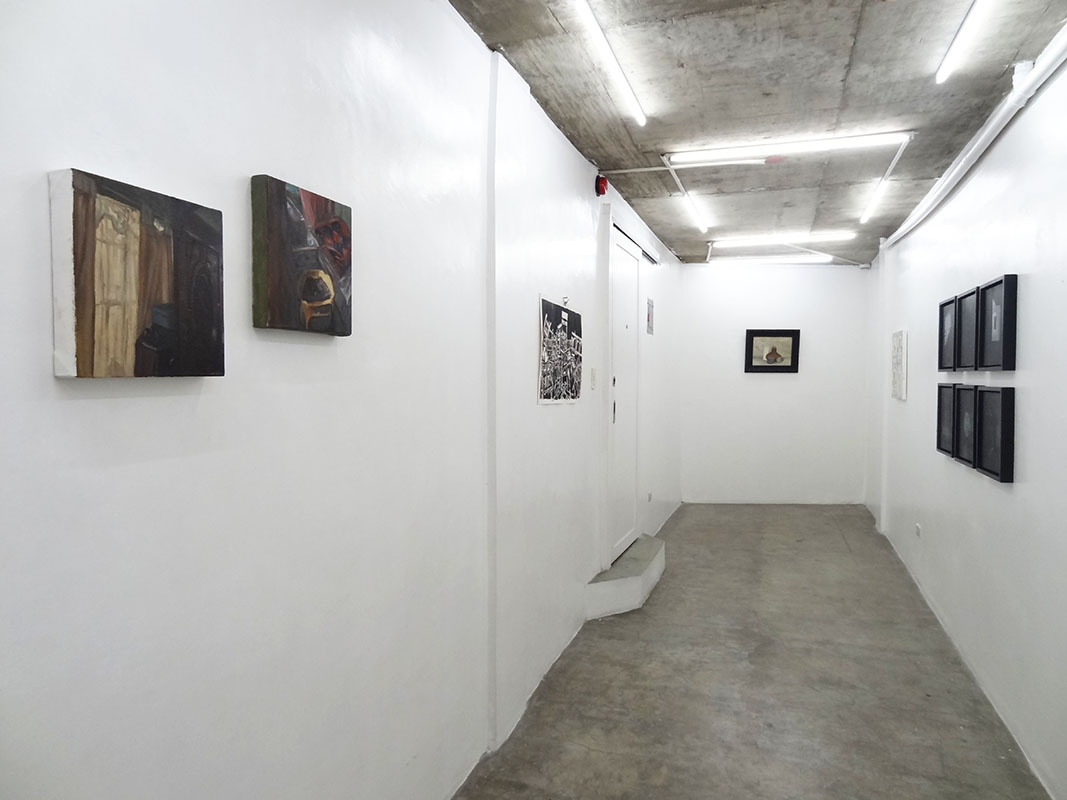 Exhibition view of The Thing Is at Artery Art Space.
Delete

The jolt could have happened the instant you enter. Past the shop with its intriguing array of curiosities and book and zine titles is a narrow corridor, with one of Argie Bandoy’s small, “Untitled” still-life paintings hanging overhead. To the side is Tracie Anglo-Dizon’s “Will you still love me when I’m old and grey,” a porcelain plate with faint drips of oil paint trailing down the canvas. The effect is the spell of antiquity unsettled: still life plain jugs rendered coarsely with whites of the canvas peeking through; the grace attendant to porcelain sullied by the artist’s precise neglect.

Beside it is the polyptych “Finding the River” by Aui Suarez, comprising semblances of a darkly lit home. Kim Gaceja’s conversely homey pair, “6 a.m.” and “Hiatus,” hang across; anticipating the stairway is Bayani Galera’s watercolor study of school chairs in disarray, “Learning Landscape No. 6.” Further clues up ahead: following the layout of the artist-run space leads you, in zigzag, to the main showroom. 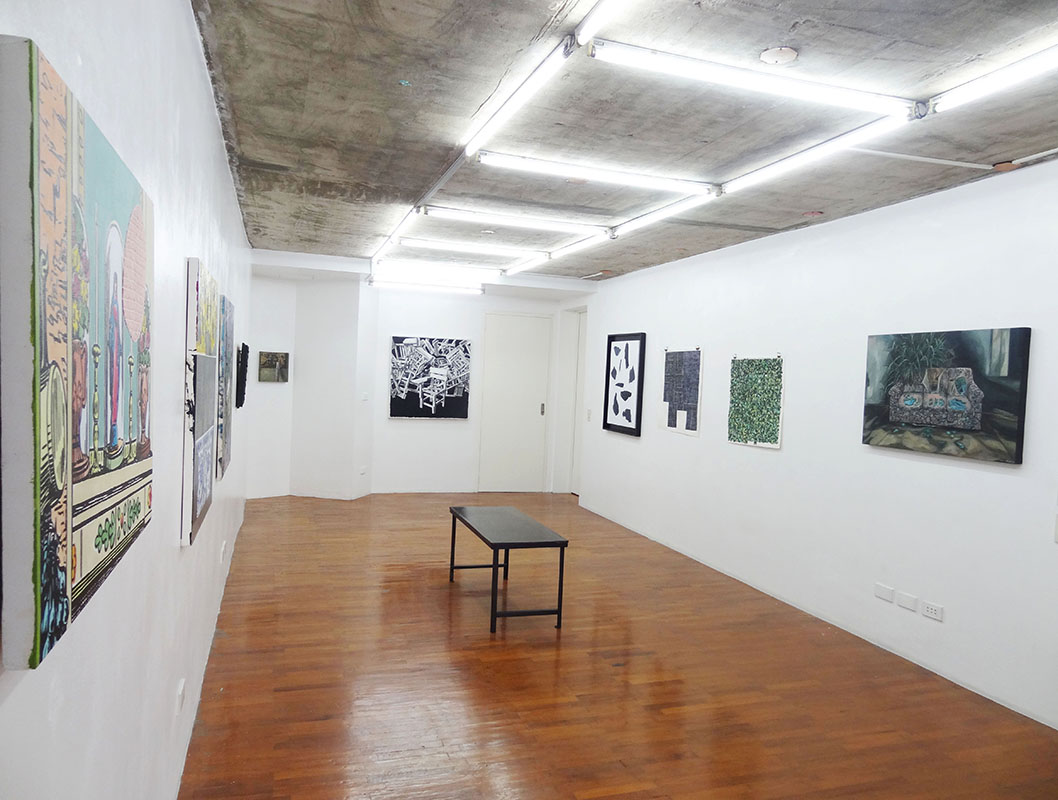 Second floor exhibition view of The Thing Is at Artery Art Space.
Delete

Ikea Rizalon’s brightly vintage “Sola Gratia” with an embroidered patchwork elevates you, right as Regina Reyes’s “Partly Truth, Partly Fiction” depicts a shredded couch to remind you where you are. As you move along, there’s a sense of the artists’ individual preoccupations merging and moving with you; the everyday periphery closing in.

Farther to the right are two unframed watercolor works by Lena Cobangbang, best viewed the instant you walk in closer: from a side angle, away. “Frn ‘f ya (Essential Blinders for the Prince)” and “N Around ya (Blimey Rousseau)” are titles read best aloud. The first work spells out the word ELEPHANT; the second piece takes the idea further, forming a pattern out of tiny versions of the mammal in the style of military fatigues.

“In Cold War surveillance parlance,” as Cobangbang explains in the online group interview component for the show, “it [the elephant] could really mean anything,” heavy though lies the implication that “very insidious operations” have occurred. This was my jolt: in the spirit of animal-related metaphors, one possible outcome reveals the uniformity of elephants as a plenitude of small, tightly imbricated red herrings.

It’s something of a final signal that the curtain has been pulled back. When it registers, it’s as if cast upon you is this wider, impersonal cultural net. It fosters a grounded, ‘take it or leave it’ attitude, couched in a benign unprecious (and slightly skeptical) realism that the whole of The Thing Is, in principle, partakes. The most explicit is the sole work by Jayson Oliveria. In his cheekily titled work “Worthless,” a thick wad of cash is thrust center, held as one would a sheaf of plucked weeds. This resonates with Aui Suarez’s reason behind the titles “Finding the River” and “Company”: “The titles were from basic survival knowledge when one is lost in a natural setting.” It’s one thing to think everything is upended nowadays; it’s another to consider whether that sense of dislocation had always been the case.

It might be in highlighting what the thing isn’t that makes the group show at Artery Art Space even more worthwhile. In considering ‘the everyday’ as not what is scrolled out onto digital screens, but what snakes out into the space’s narrow stairway, up and down the floors, and across the walls: a worn-out couch likely to chafe the thighs, a room with a made bed, a Marian shrine, images of porcelain made a little less pristine by hardened drips of paint.

In the haze and shadow of the pandemic, the works don’t ask you to be nostalgic, but to instead feel the everyday tether: to experience the sensations available and wave away the ones that are not. In a time when it seems paramount to break the spell of listlessness, here are some sensuous works that do just that. 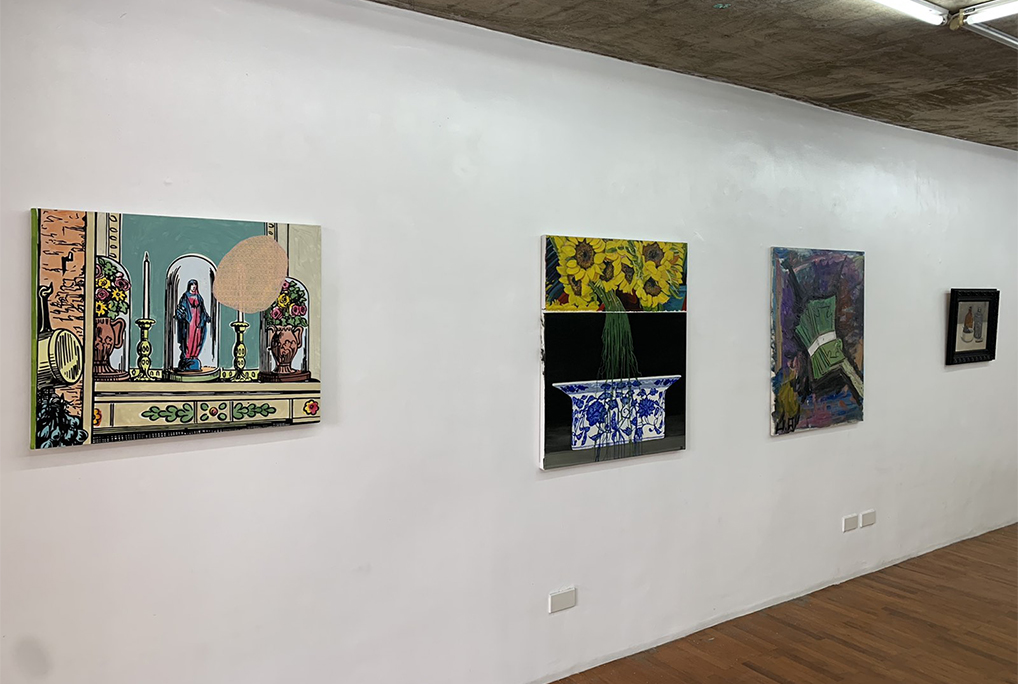 The Thing Is continues until this Saturday, 24 October, and must not be missed. For more information and booking, head on over to the new and improved website of Artery Art Space.

This article has been edited to accommodate the show extension, now October 24.