Last 19 September, almost in cue with the “ber” month rain, Galerie Stephanie has since been flooded with art. A solo exhibition by Farley Del Rosario, a group exhibition featuring Kat Grow, Ev Yu, Clarissa Gonzales, and Genavee Lazaro, and a joint online exclusive between Cru Camara and Tuchi Imperial, are the three tantalizing exhibitions that remain open for view until 5 October. 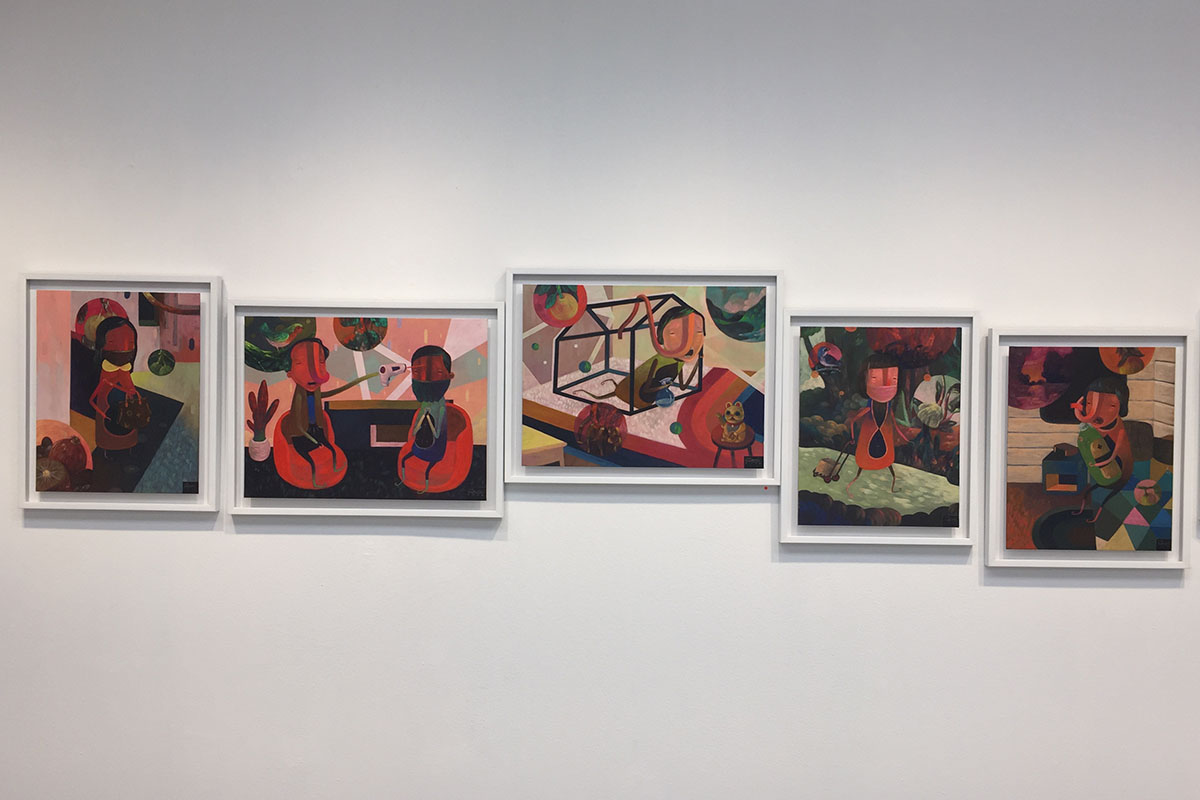 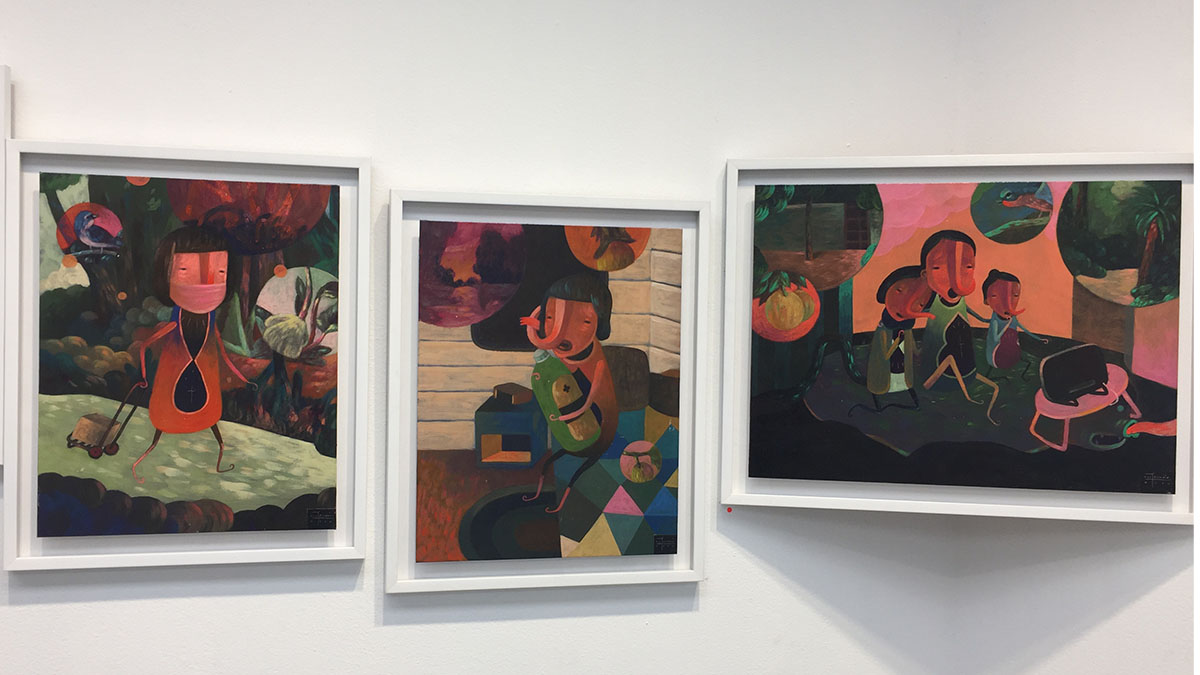 Farley Del Rosario’s Fifteen-Day Favorites punches you in. The bulk of the artist’s series are mounted left of you, hanging closely together in a sinuous line; the points in the narrative they create strike like a fast succession of jabs. Comprising narrative vignettes, to each a dedicated painting, we see scenes of a woman nursing a large bottle of disinfectant, yet another doing the same with a Louis Vuitton bag. There’s a man gasping for air as he inches his head out of the metal frame of a house. Here, and very quickly, the title “Favorites” connects to sense, as the artist’s faux naïf expressionism frolics past the alleged urgency of pandemic survival, and instead animates the posher romanticism that can, at times, project this widespread hardship we have into a caper.

And if no one (of immediate note) is spared the scrutiny, then Farley seems to at least want us all in on the joke. Hanging opposite the series, perhaps even surveying it, is the larger-scale work, “I’m in Control.” The painting depicts an artist with his head and boneless arms slotted into a pillory, his trunk nose tangled into a knot, his anguished gaze locked onto the canvas before him. Despite the tendrils sprawling out of the work-in-progress, tugging the artist’s slim hooked hands to complete it, there arises the impression that isolated as he is, the facsimile artist had gone right ahead and persecuted himself. 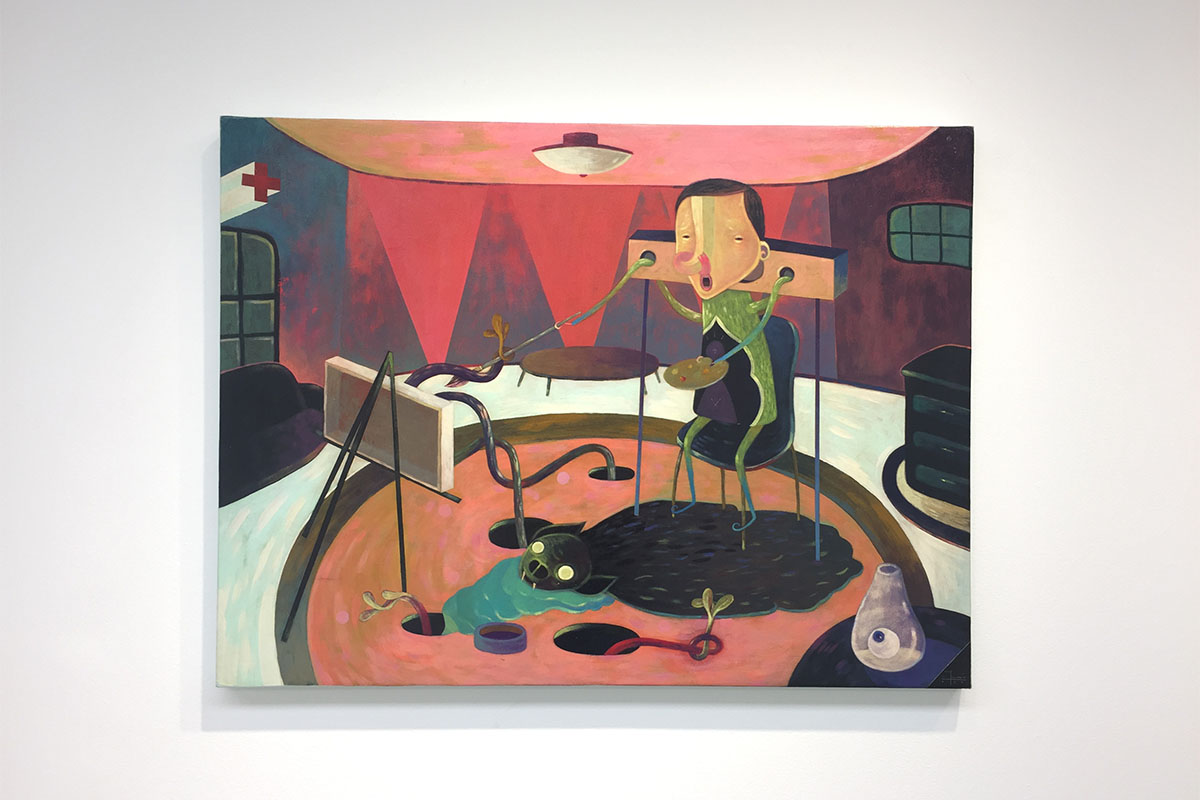 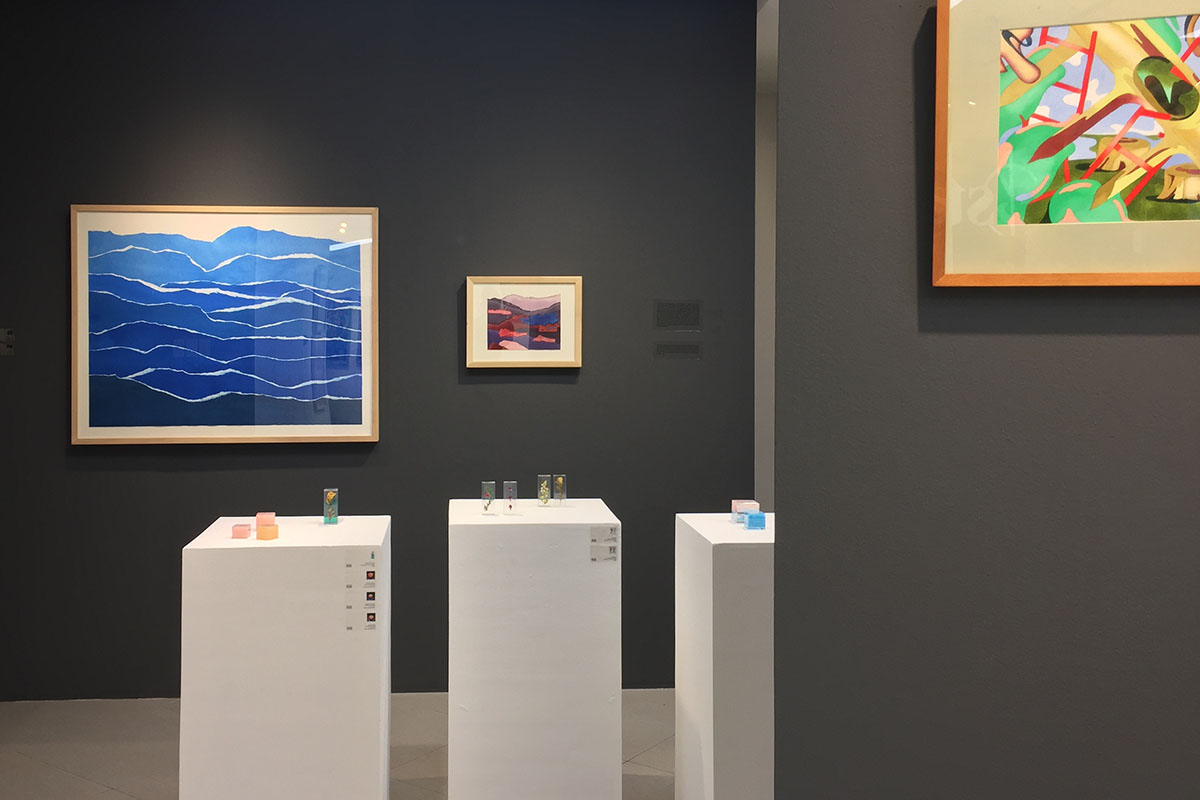 This facet of control resonates with Kat Grow’s “The Power of a Myth.” A collage stacking different strips of blue, the logic the image suggests is tidal: some things flow in, some things flow out. It’s the artist’s incisive comment on how long-held beliefs condition failure. For as long as we buy into the trick that oceanwater is innately colored blue, rather than made or perceived as blue, then so it is. It’s also cleverly self-reflexive: she did, after all, produce these shades of blue from pigments she made by hand.

Kat’s works – included here are some from her Fractions of Heterotopia series – share the gallery space with pieces by medium-centered artists Ev Yu, Genavee Lazaro, and Clarissa Gonzales for Dimensions of Fragility. Where fragility for Kat might speak largely into her process (i.e., the hands-on labor involved in creating – this is a pun – fine art), the Minute Disaster series by artist and zine maker Ev Yu plays out the wrack and havoc from the simplest mishaps, whether it’s a bucket of white paint toppling over or a back garden tree. 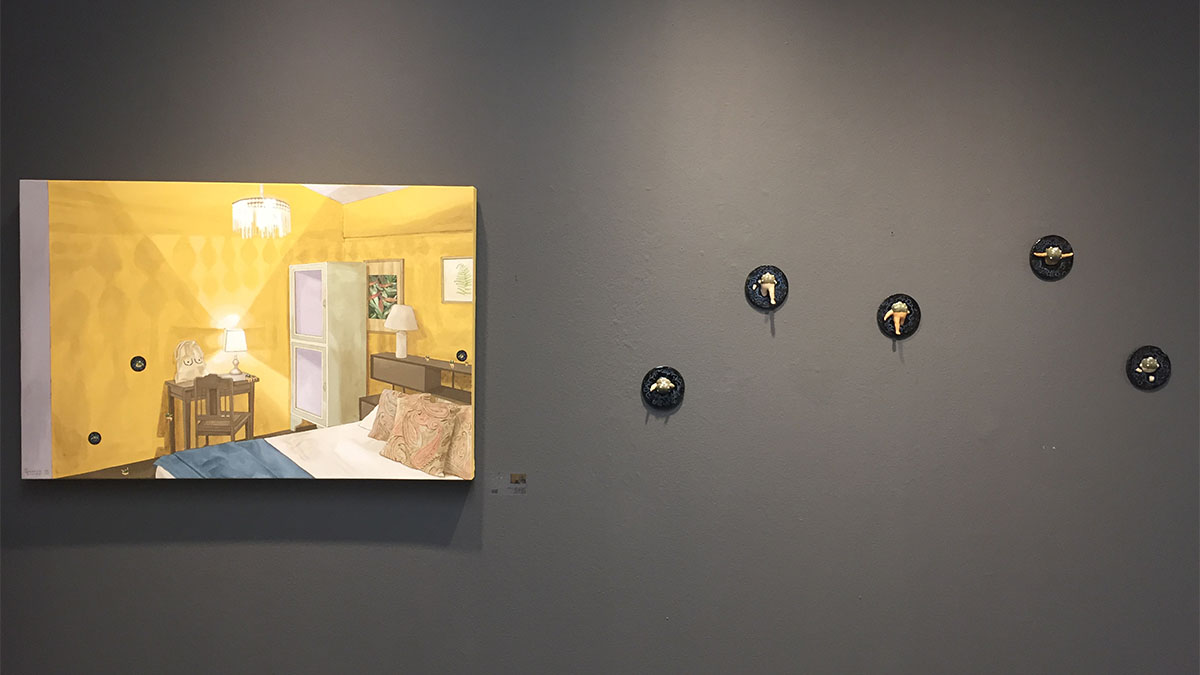 Genavee Lazaro’s works, meanwhile, might have much to do with the literal fragility of her ceramics, her precious cacti friends born out of the heat from a kiln, and the need for them to animate domestic interiors. Just as alluring are the precious resin-encased art objects of Clarissa Gonzalez. While audiophiles might recognize her as the one behind the album art of UDD’s Capacities, the multimedia artist is also known for tackling the theme of human vulnerability directly, with color and light as cardinal points (Morse Code Secrets, 2017; Fragile Light, 2016). A quiet little marvel is “perfect storm,” a transparent cube of clouds you can hold in the palm of your hand. 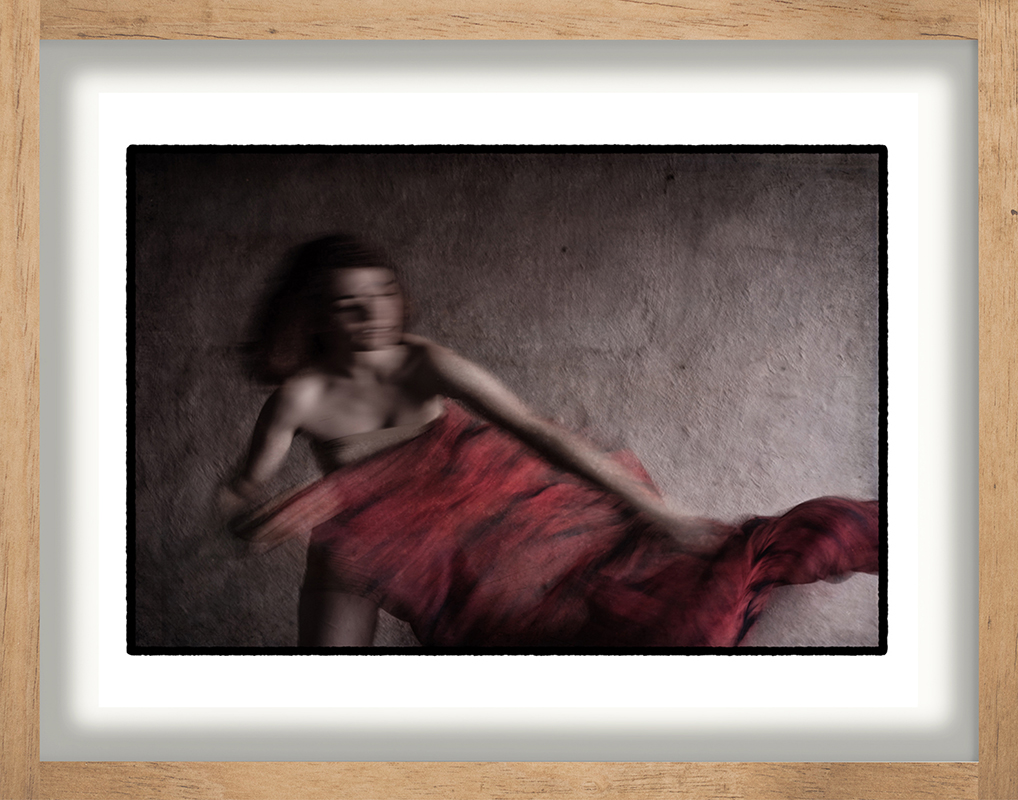 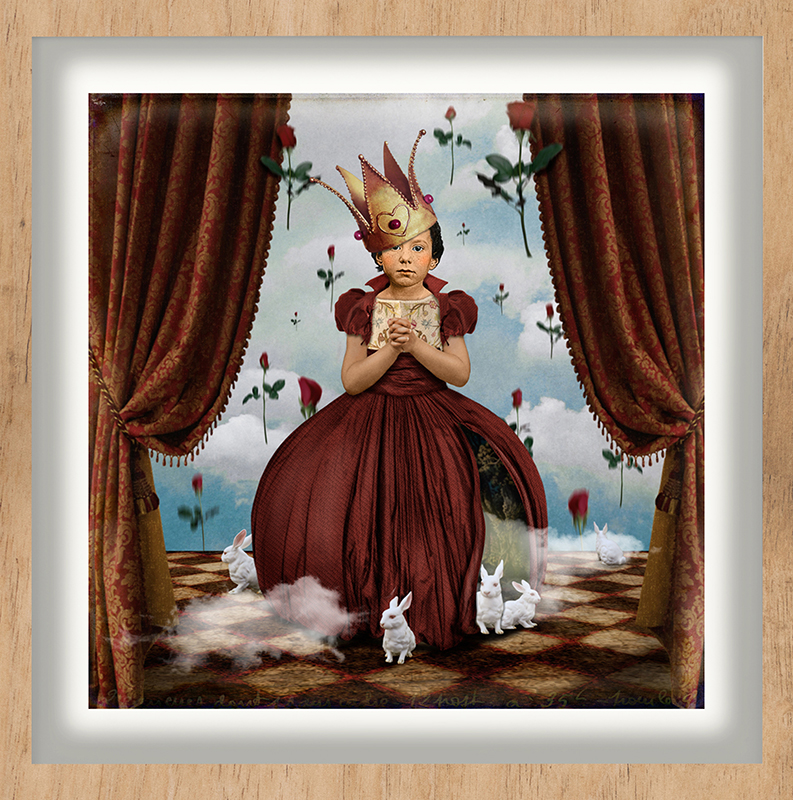 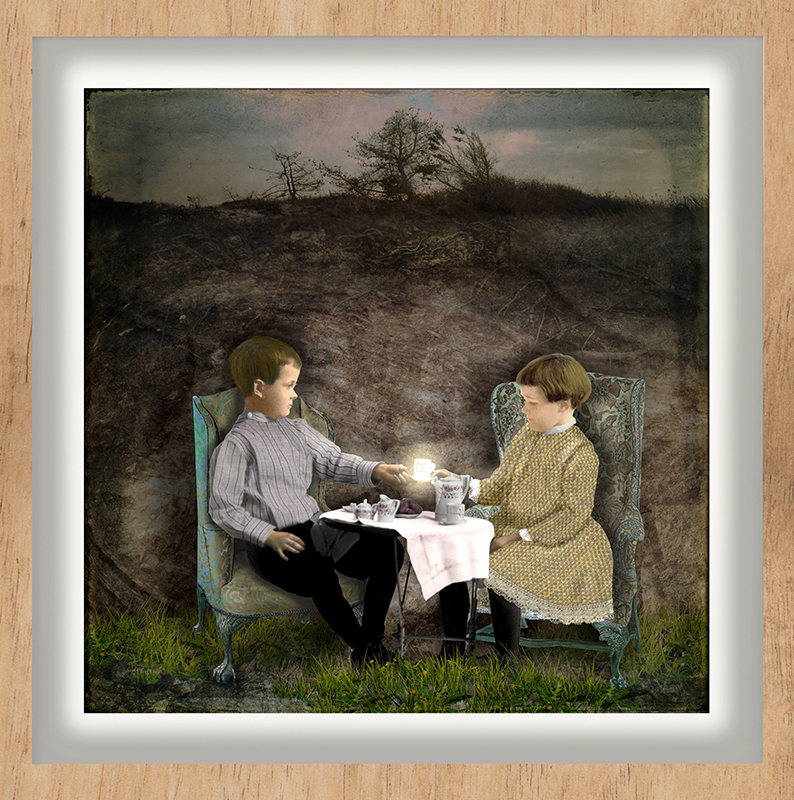 Tuchi Imperial was never interested in taking perfect photographs, or perfection for that matter, as she told me, but in her gleeful appreciation of their cracks. As all her works are printed on vellum, it’s uncertain how the image would react to the organic material. Coupled with the use of metallic leaf, the cracks on the finish presented the possibility for Tuchi, with the surrealist collages she creates from found daguerreotypes and tintypes, to explore the contents of their minds and have them fill out the space; and, just the same, with her blurred portraits of dancers, to let slip their personalities.

You can find Tuchi’s works between Fifteen-Day Favorites and Dimensions of Fragility, via a QR code for viewers to access Field Notes on Form, a stunning online showcase of hers and Cru Camara’s selected works as they delve into notions of femininity. It might be appropriate to sidetrack and quote Torey Akers, here, whose linked essay (please excuse the word) problematizes the whole notion of white masculinity in art (as the attacked ‘heteronormative’ center): “Gender as we know it isn’t working anymore. And neither are its visual signifiers.” 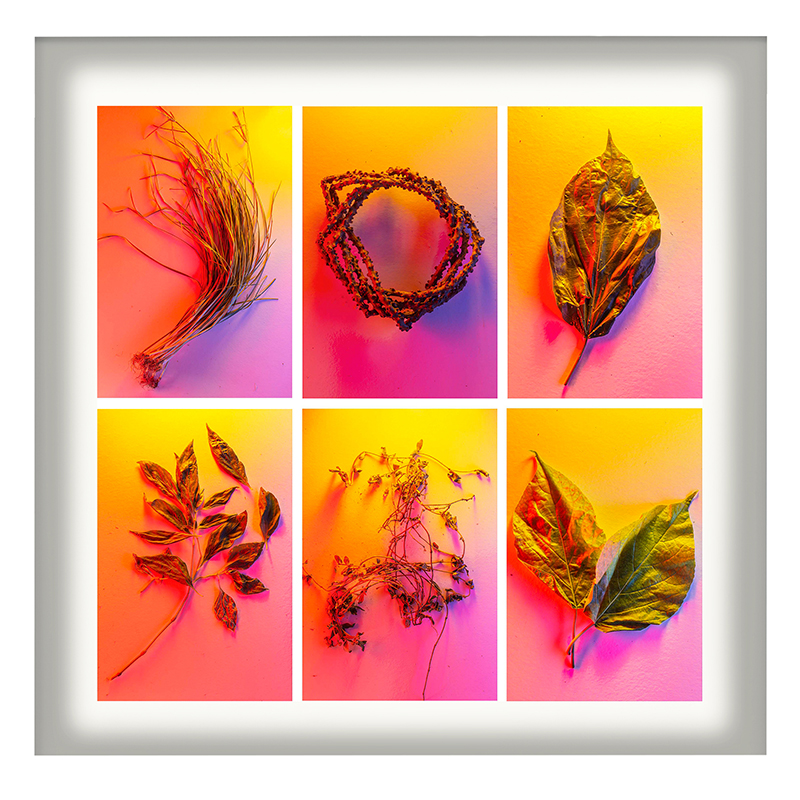 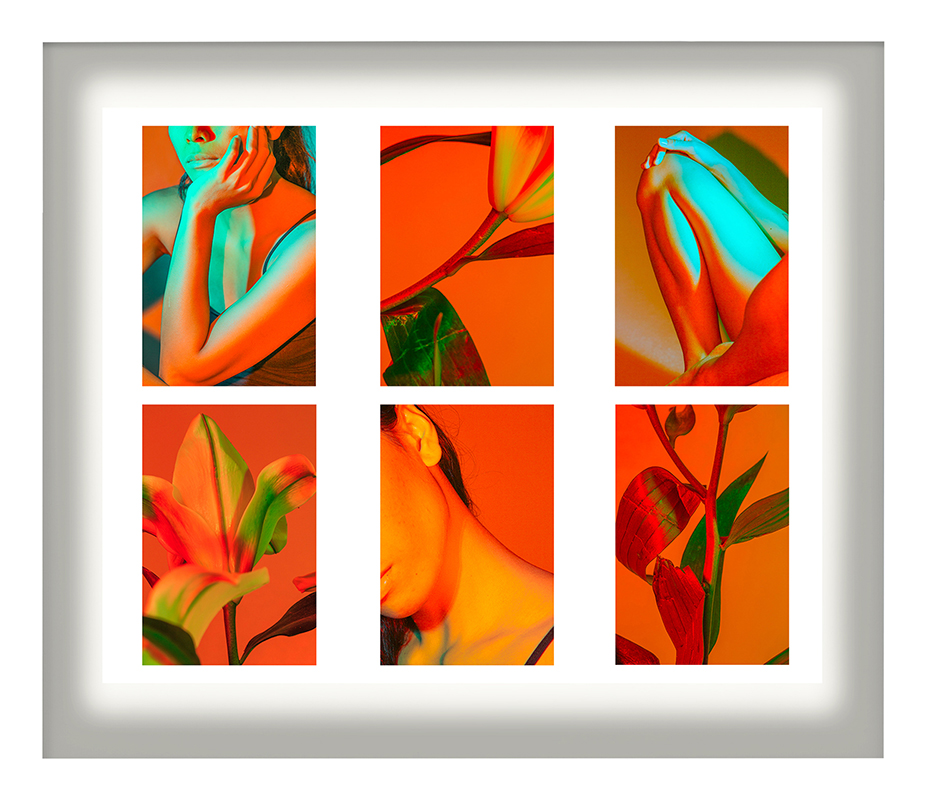 I feel like this helps ground things. Akers believes there’s more to white straight masculinity being constructed as the benchmark. Instead, it’s about how its reproduction can’t be helped. As a core cultural concept, masculinity is too deeply embedded for other forms of knowledge to exist without the former being cited. Notions of anything ‘other,’ like femininity, are summarily treated as a stain, an incisive remark against this particular headcanon, which necessarily has the latter respond by shedding what makes it problematic and has it adapt in step.

In this context and many others that elide the topic, Cru is such a breath of fresh air. She explained in an interview outtake for the show that she was taught differently; she didn’t have to adhere to a certain ‘way’; femininity is whatever she wanted it to be, which is perhaps the healthiest way to keep the stickier parts of it out of mind. After all, her idea of femininity came naturally as something for her to explore, at least unconsciously, through the colorful energies that have so characterized her standout art.

In that sense, it might be more exact to see Cru’s works the way she prefers them, before lofty attachments, as wonderful things that just are. That is, the way she saw her mundane subjects before editing them into form: as extractions of an otherworldly reality, right under our noses. From one of the interview outtakes I got to see, here’s my favorite quote from her: “Photography kind of brings me this way of noticing a crack in the wall or just simple things or even the way someone else moves – it’s like me taking a highlighter and kind of drawing all these colors over it and saying, ‘hey, look at this, it’s amazing, it’s something that you may not have noticed.’” 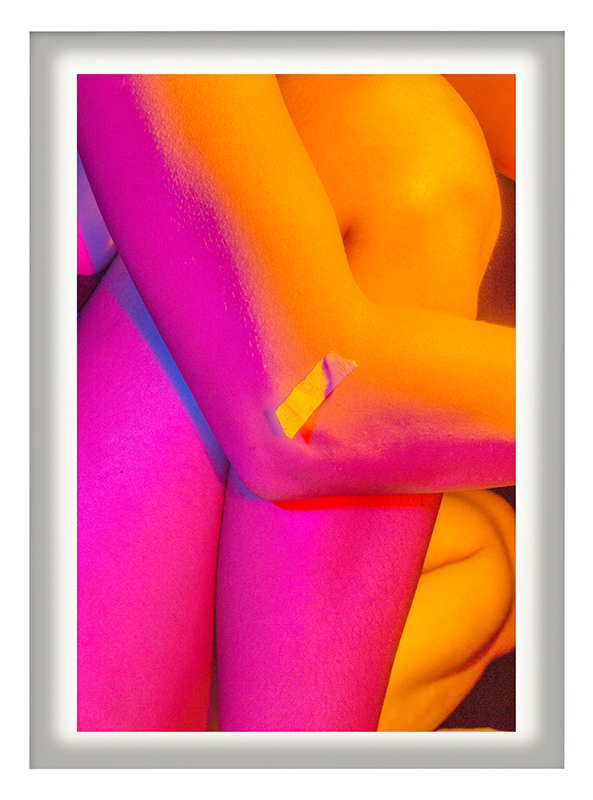 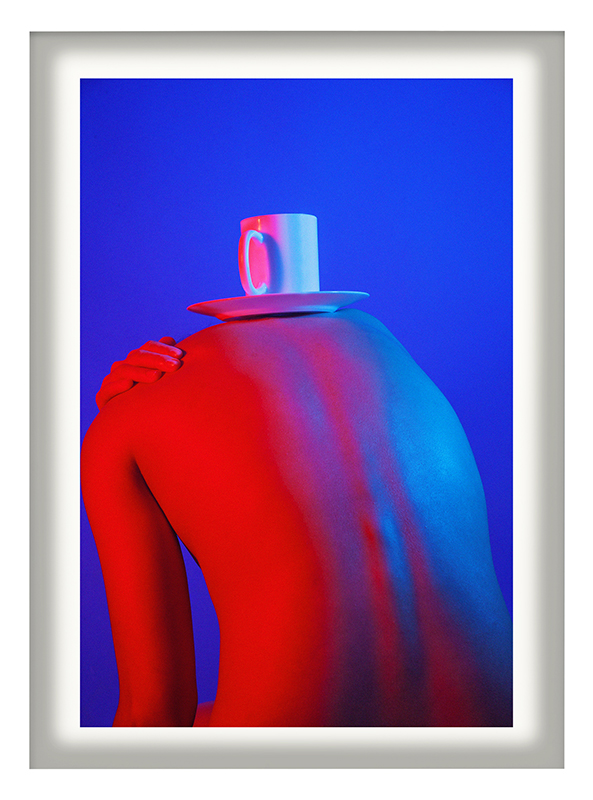 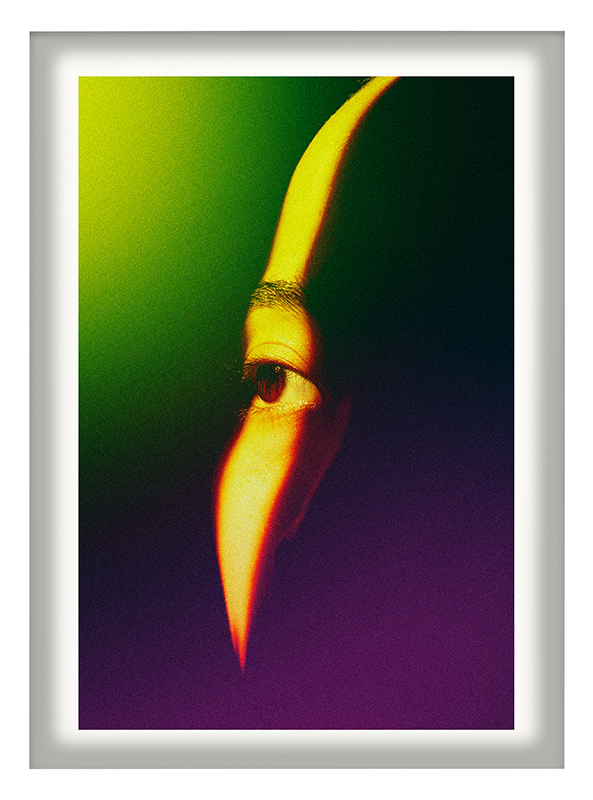 All images courtesy of, or taken at, Galerie Stephanie.