Just days after the revert to MECQ, Space Encounters Gallery launched its August group exhibition online, I Think We’re Alone Now: Portraits of Self-Reflection. As any quick perusal through the gallery’s downloadable e-catalogue would suggest, the show packs a wallop, with a total of 50-plus affordable artworks that range from the dark and darkly funny to solemn and lighter moods.

The oil painting featured above is “Pinpoint” by Amos Malayao. Adept in depicting layers of emotion to precise detail, particularly that of the dark and brooding kind, Malayao emerged from isolation, oddly enough, with a more balanced view of the world. Bright accents and strokes complete his palette; something as simple as a hand massaging the other is enough to suggest pensive thinking in this time of solitude. On the tinge of lightness his new works carry, Malayao shares, “No matter how the current situation looks like, keep hoping for a better future. Take the opportunity to grow instead of feeling defeated.”

The show’s sub-title, “Portraits of Self-Reflection,” explains it all. Joining the large and ever-growing body of works made in quarantine—a time we may someday remember as the time the best art had been produced—are those of Amos Malayao, Kenneth Santiago, 3CV (Harddy Santos), and Franz “Nano” Vocalan. 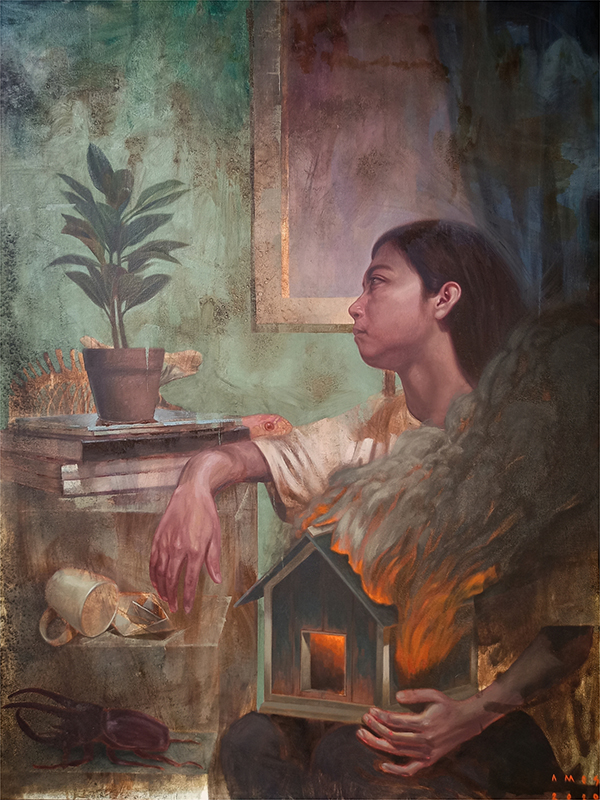 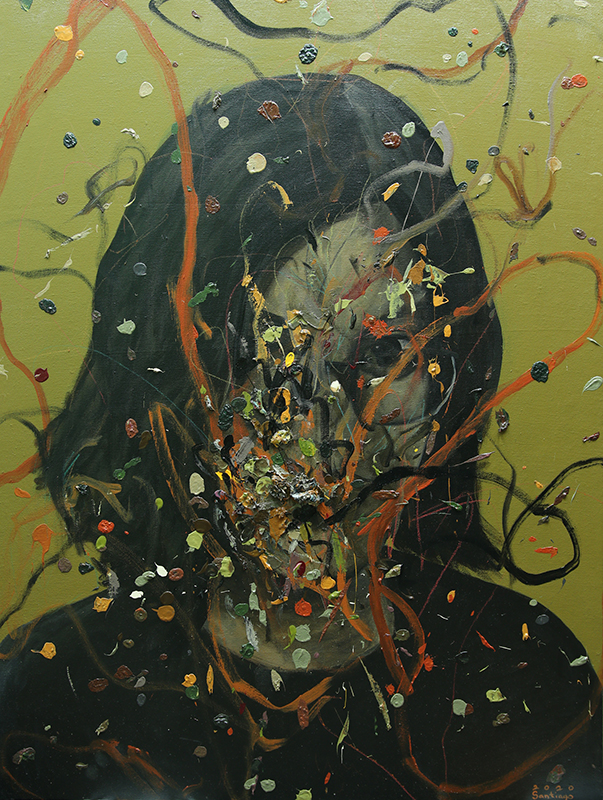 Solace continues with the fourteen self-portraits of Kenneth Santiago, who owes it to horticulture for giving the artist clarity to continue with his practice. “I focused on preparing, conceptualizing, and planning future exhibitions while at the same time I researched and experimented on ways to make my work better,” writes the artist. Implied by the catalogue writeup, the thick, vivid splatters of paint across the series seem to act as reminders that people are not as transparent as passing judgment would have us think. 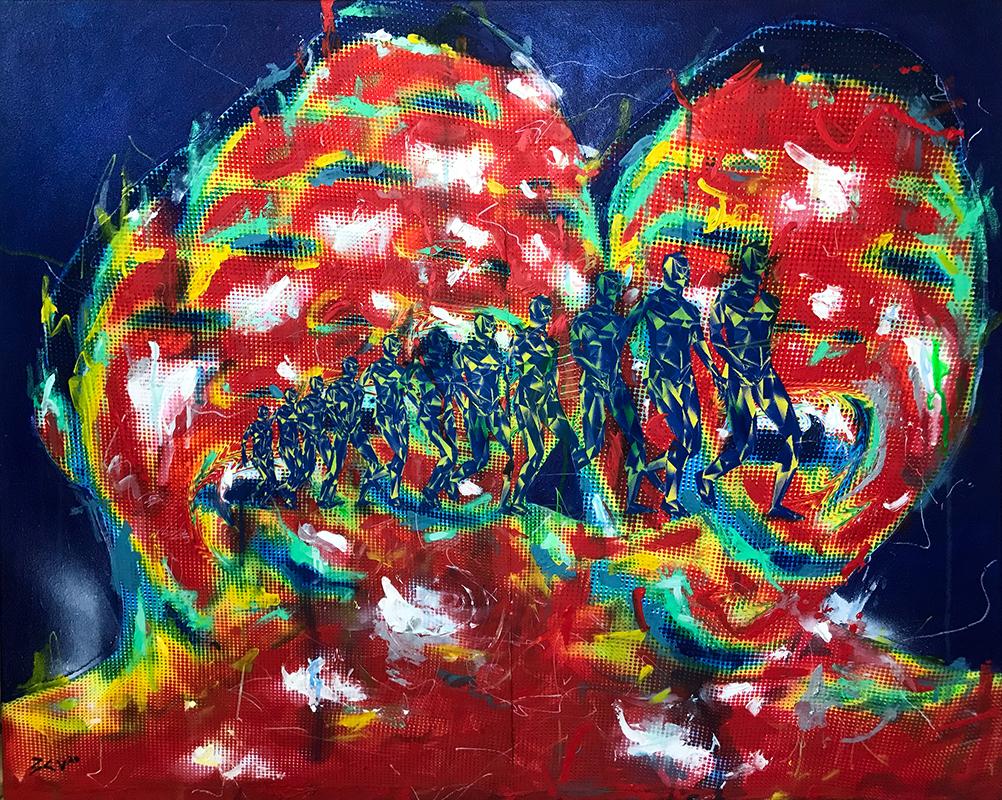 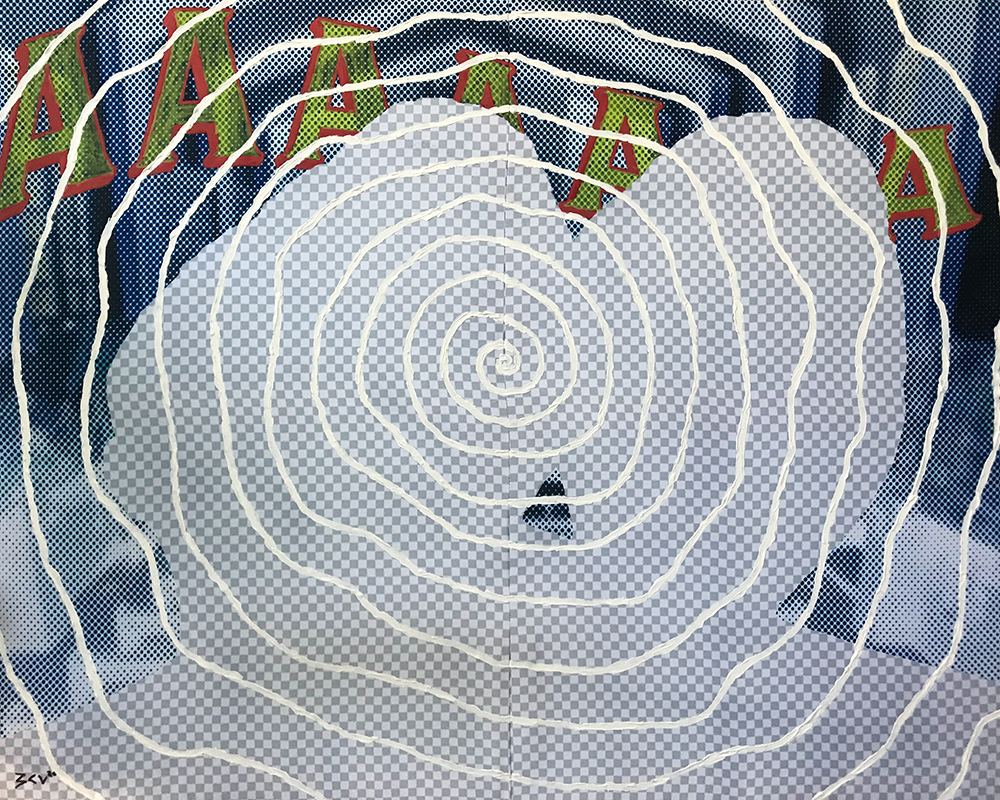 The works of 3CV and Vocalan, meanwhile, playfully show that not all revelations of oneself need be so spiritually lofty—some involve people. Family quarrels and the generational divide were certainly a thing for most during quarantine, too, and the sentiment certainly cuts through in Vocalan’s diptych, “Ok Boomer”: two vultures in a surreal, Looney Tunes-esque scenario.

The mixed media works of 3CV are based on references sent to the artist from friends and family on social media, which he then painted over. As an artist who wears his convictions on his sleeve (the moniker stands for the keyboard shortcuts for copy-paste), Harrdy Santos believes that everything already exists; it’s the sorting out and giving it form according to a unique vision that compasses his art practice. 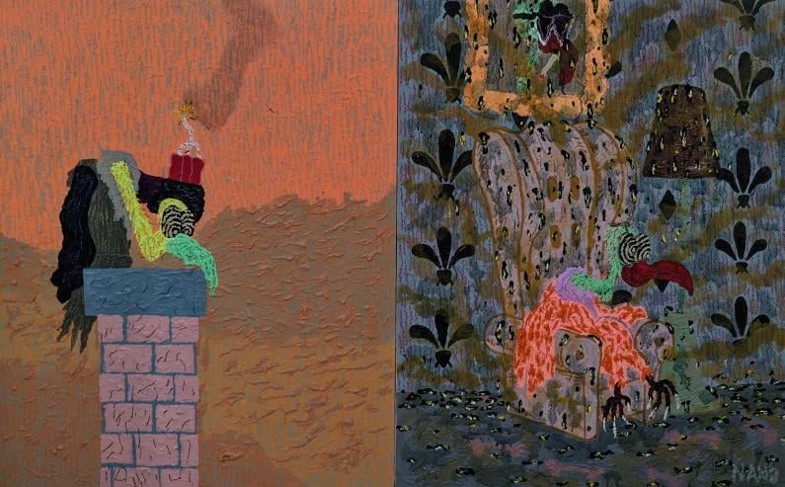 While its physical venue remains closed until the 18th, it’s business as usual for Space Encounters. For inquiries, contact spacegallery.info@gmail.com. If you have an appetite for more Encounters, they also have a booth up at Art in the Park, ongoing until the 17th.