Jana Benitez answers and shares the call of the wild

As it so often happens, fame at a young age comes with specific challenges. A certain pressure crept up into Jana Benitez. She was dubbed a wunderkind since debuting in a solo show at age 12 in the Ayala Museum and then holding another solo show at age 14 at the Walter Wickiser Gallery in New York City.

She looks back on her teen years as spent protecting her love for painting, ever cautious of the limelight. Despite coming from a storied family in the Philippines, one active in the fields of civil service, education, and civic work during the nation’s early days, Benitez never felt the pressure “to be good” from them.

Benitez describes growing up as having “inherited the stories, but I didn’t go around with an idea of what it means ‘to be a Benitez’ or the reputations preceding me.” Art for her was a lazy Sunday morning: She and her dad often painted together for fun. Her mother meanwhile collected art.

She speaks of her family’s “orientation to serve,” to think of the welfare of people. Looking at her work, she realizes that “I feel a calling towards service currently manifesting as an art practice. There’s definitely a relationship to the collective and an understanding about community.”

The pressure, however, came from the publicity her work got her. It was a dimension of a successful art practice that the then-teenager realized did not jive with her. 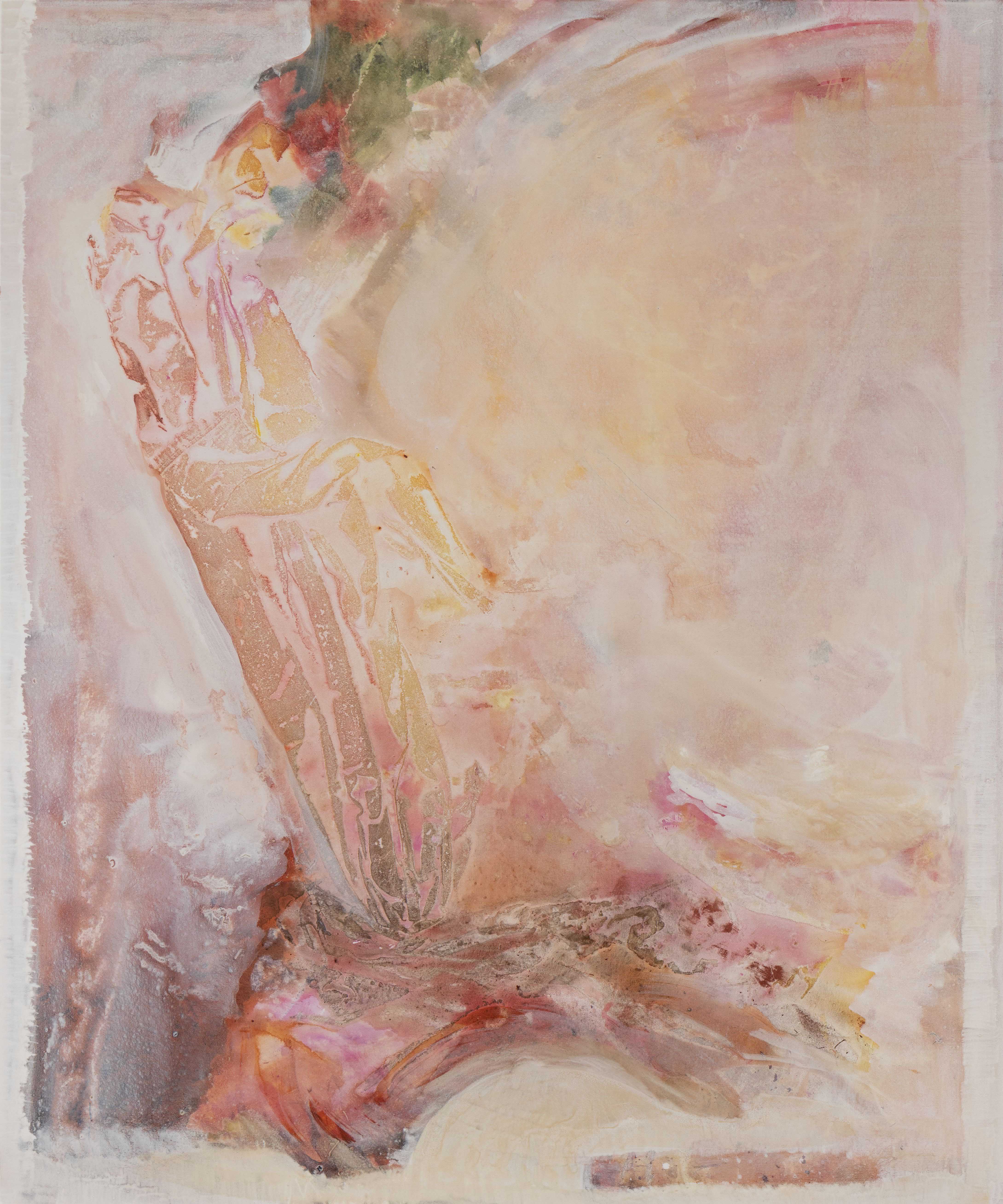 Pearls of the Orient

“No one’s thinking about who the greater painter is,” Benitez confides, describing the “visceral” moment when one is standing in front of good art, where the egoistic mind games “evaporate in the presence of that space.”
In our conversation in her ancestral home in Metro Manila, the painter shares that she’s recently becoming truly comfortable with the aspects of an artist’s life outside the studio: publicity and public appearances, press interviews, the works.
Today, Benitez divides her time between various studios in the United States while exhibiting across continents. Having studied in numerous art schools until finishing her MFA, she is one of the roster artists of Pearl Lam Galleries, started by the eponymous art advocate from Hong Kong.
In the Benitez home, another publication is also present, and during the photoshoot, furniture is hauled, and select paintings from different periods of her career are moved around.
Through it all, the artist allows herself to be directed by the jovial photographer, laughing at his dad jokes. Thankfully, the latter knows how to help his subjects be at ease, and perhaps Benitez is finally more comfortable with this aspect of an artist’s life. 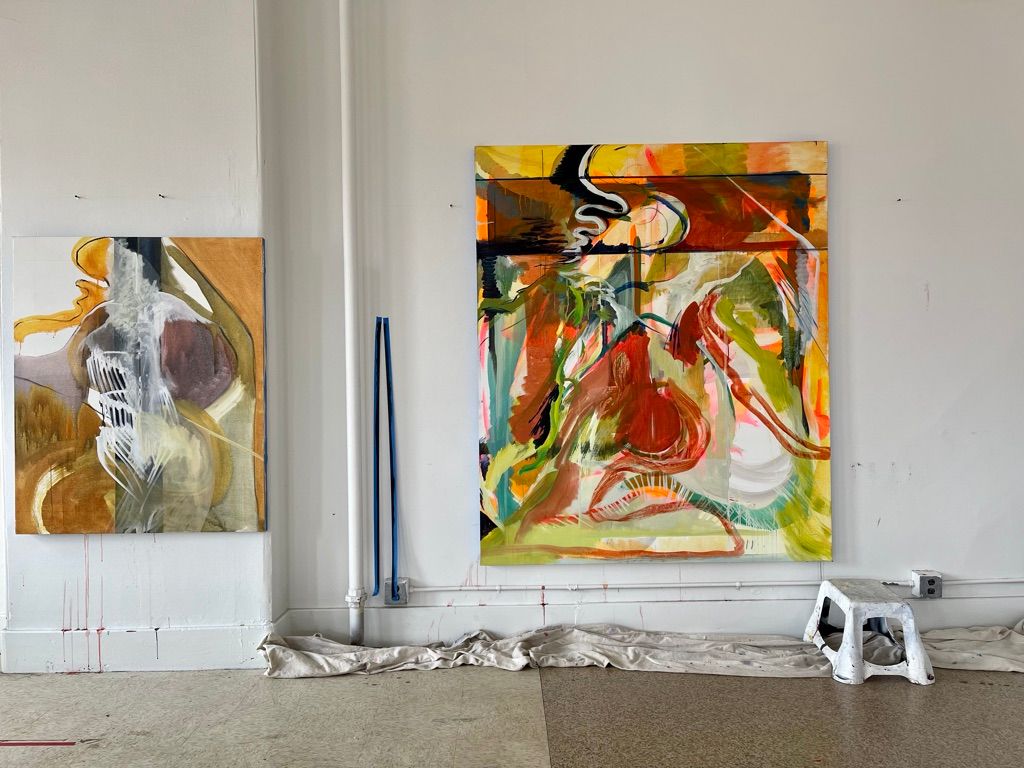 The artist in her studio.
EditDelete 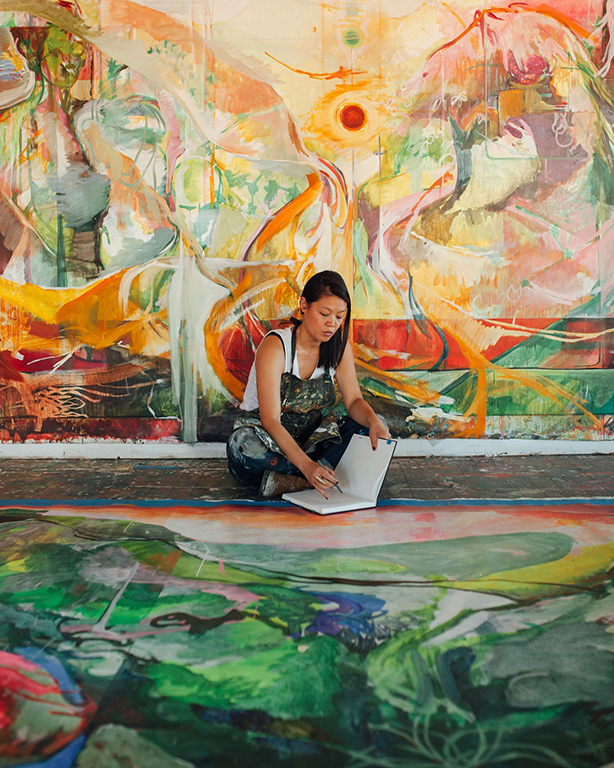 Later, she shares how she thinks about those buying her work, “it’s not just a transaction, not just supporting me but also, I would hope, supporting a sensibility, an orientation, a kind of collective effort.”

At one point, she asks the house’s long-time caretaker to join her for a photo. I can’t help but hope that particular photo makes it to print.

As with her family’s caretaker, Benitez draws strength from the verve of women around her, in the Philippines and beyond.

One of the women instrumental to Benitez’s practice is her friend, Pearl Lam. The two met at a dinner party hosted by another female art patron and museum founder, Alice Walton, founder of the Crystal Bridges Museum of American Art.

Benitez and Lam sat across each other, and in the midst of muted conversation going all around about Eastern and Western art, the two got into a spirited debate. It didn’t feel like Benitez was trying to impress Lam and vice versa, nor did it feel like an argument. It was more joust than duel.

After the exchange, Lam approached Benitez and the latter recalls how Lam introduced herself: “Who are you? I like your ideas! I wanna see your art!” In no time, Lam consigned Benitez’s works to her galleries.

The two share parallels: Both came from storied families and each decided to carve out their own paths.

She’s recently taken up rock-climbing, and it reminds her of the community of painters she finds herself in. The whole idea of painting as a competition seems ridiculous to her, but she doesn’t discount the rigor involved, “this isn’t kumbayah, everyone’s good!”

But she also doesn’t see the need to have winners and losers, citing how when in the studio, she and her painter friends often text each other “you can do this!” when the work gets most exhausting. And just like bouldering, painters “share information and advice on how to surmount boulders.” The view from the top is always better shared. 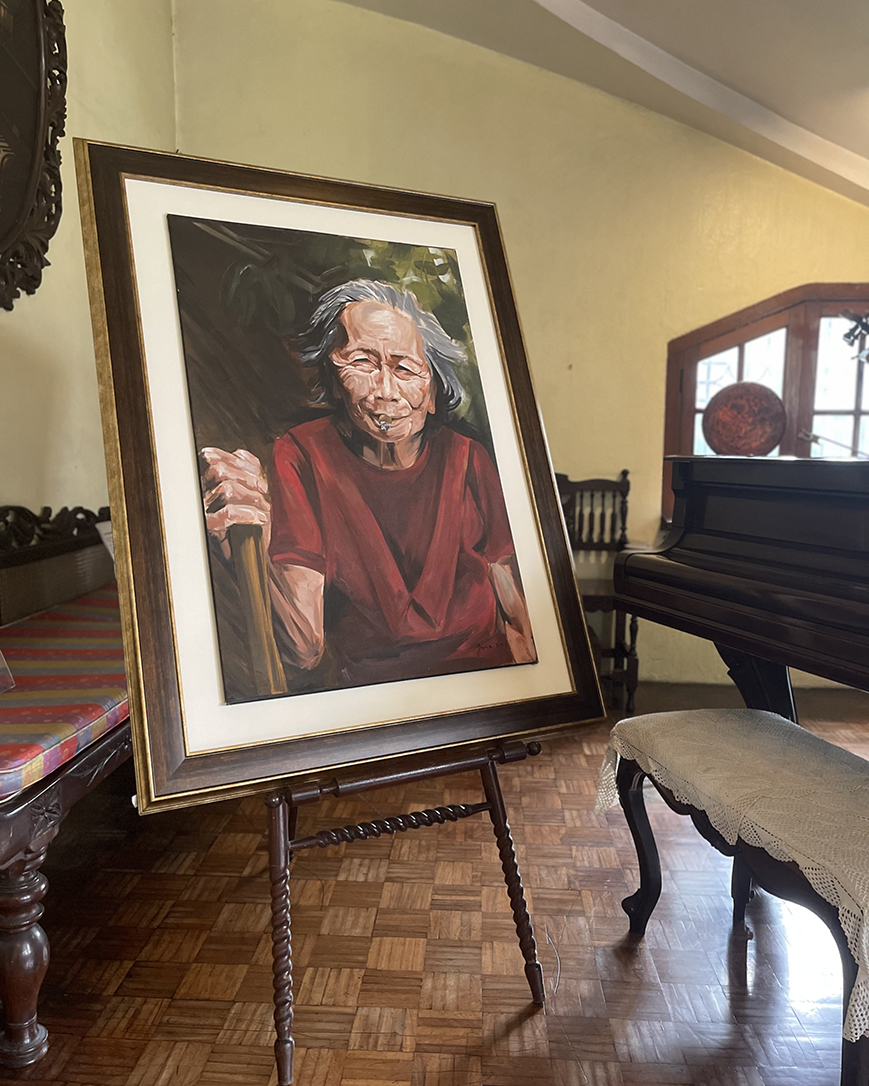 Benitez’s present painting style is gestural, barely figurative art, though she started with the latter in her early days. She mentions that BenCab, who she considers a friend and mentor, introduced her to martial arts as he believed it was helpful to an artist’s brushstrokes.

She pursued the practice further, frequenting a Taoist temple, and training with the monks from the wee hours of the morning to late at night. Today, she cites the experience as an influence on her overall ethos.

As of this writing, she has just closed a solo show titled Wild Silence at Pearl Lam Galleries.

“It’s not the party girl wildness,” Benitez expounds, though no stranger to parties. This wildness is actually rooted in stillness, an energy that gives life because it allows life to express itself as it is, no ifs, no shoulds, no buts. Think: the seeming ease athletes develop from rigorous training.

She found it in the monks in the temple, in her father, and in friends like BenCab and Pearl Lam. It’s a wildness she found in herself and which she believes everyone can tap into.

For Benitez, this is where the “wildness, that is, living from a regular confrontation with the psyche, with fear” comes in, it’s about recognizing that cultivating self-awareness also impacts the community, “recognizing that giving tremendously to our inner path and journey is not a selfish thing to do.”

Benitez is critical of the popular “spiritual but not religious” trend of “going to Thailand to dance at the beach and do ayahuasca,” which is little more than “spiritual bypassing, not acknowledging what’s there,” that is the problems one is actually running from. This isn’t the wildness espoused by the artist. 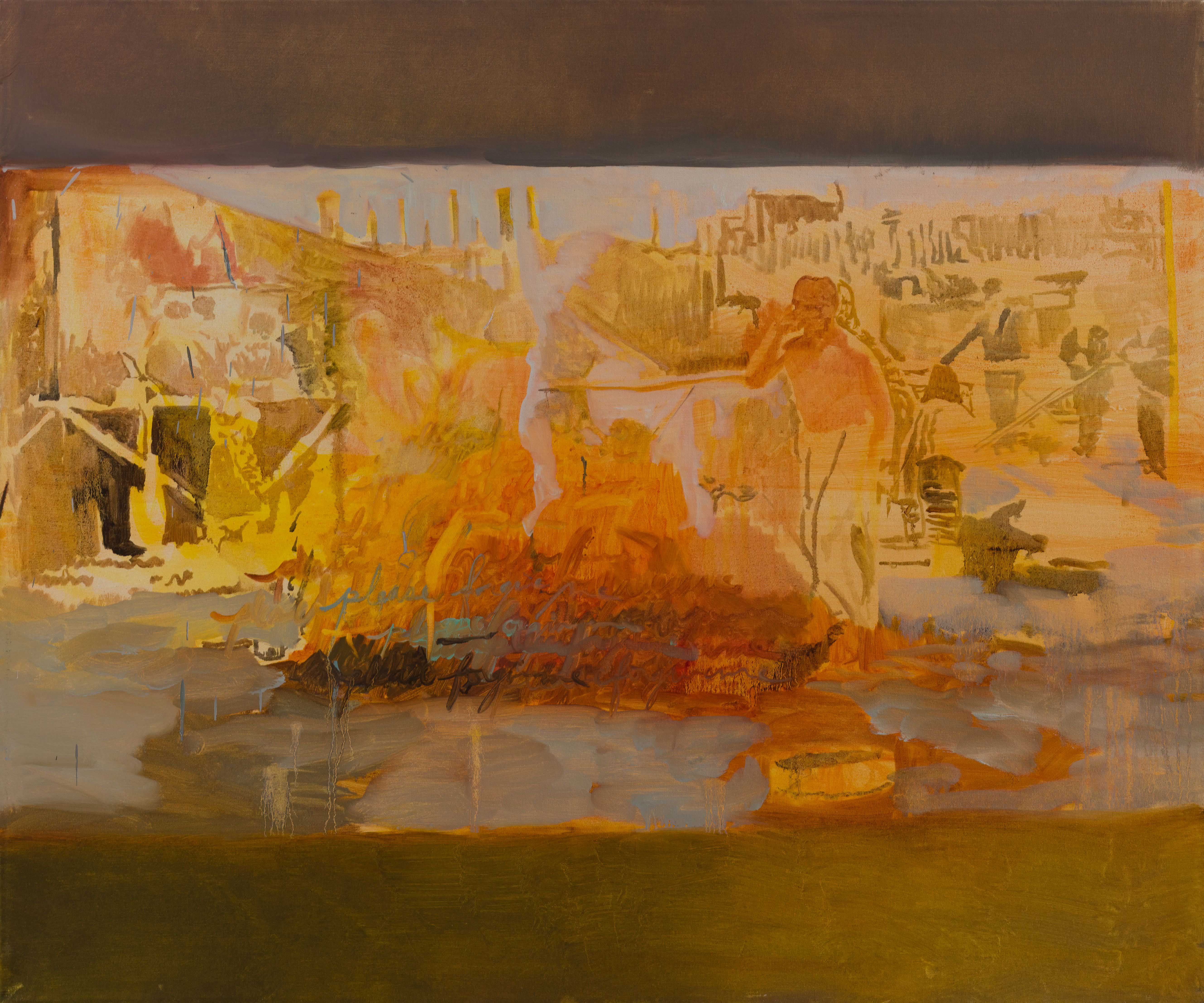 During one exhibit, Benitez depicted a historical event as a subject: the “human zoos” in Coney Island, New York, following the American annexation of the Philippines in 1902. She crafted the works in such a way that she hoped the atrocity would be revisited not with anger but with reconciliation, with healing.

After the show, Benitez saw feedback that some viewers were in deep thought about the events depicted, some were silently indignant, others were somber and despondent.

Despite happening more than a century ago, the trauma of the event has been passed down. Visitors were also connecting the show to presently-entrenched forms of racial violence.

An interviewer after said show asked Jana if she was disappointed that her message of healing didn’t come across. “Anger is part of healing, it’s part of the process. If that’s what we need to feel in order to heal, who are we to deny them that?” She told the interviewer then, and she tells the interviewer now.

Jana Benitez’s works can be viewed on Instagram @janabenitez_art and on Pearl Lam Galleries’s official social media and website.

Portraits by Rachel Darke. Images courtesy of the Artist and Pearl Lam Galleries.