The anniversary exhibition features the members’ new artworks that illustrate their experience as members of Ang INK and their journey as illustrators in general. Memorabilia, merchandise, letters, archival photos, catalogs, and publication materials serve as timestamps of Ang INK’s 30 years of meaning making in the children’s book industry. The anniversary exhibition not only marks what Ang INK has done in the past, it also reflects on what the organization seeks to maintain and hopes to see more of in the industry.

In this interview, Nina Martinez, the current president of Ang INK, shares the organization’s hopes for the future of the children’s book industry, the role of illustrators alongside writers, and the importance of children’s literature as a serious genre of its own, the need to widen the scope of stories to tell the ones that best describe the facets of daily life children go through. After all, we tell children stories for them to imagine new ideas and understand and acknowledge their feelings and experiences as they face their realities. 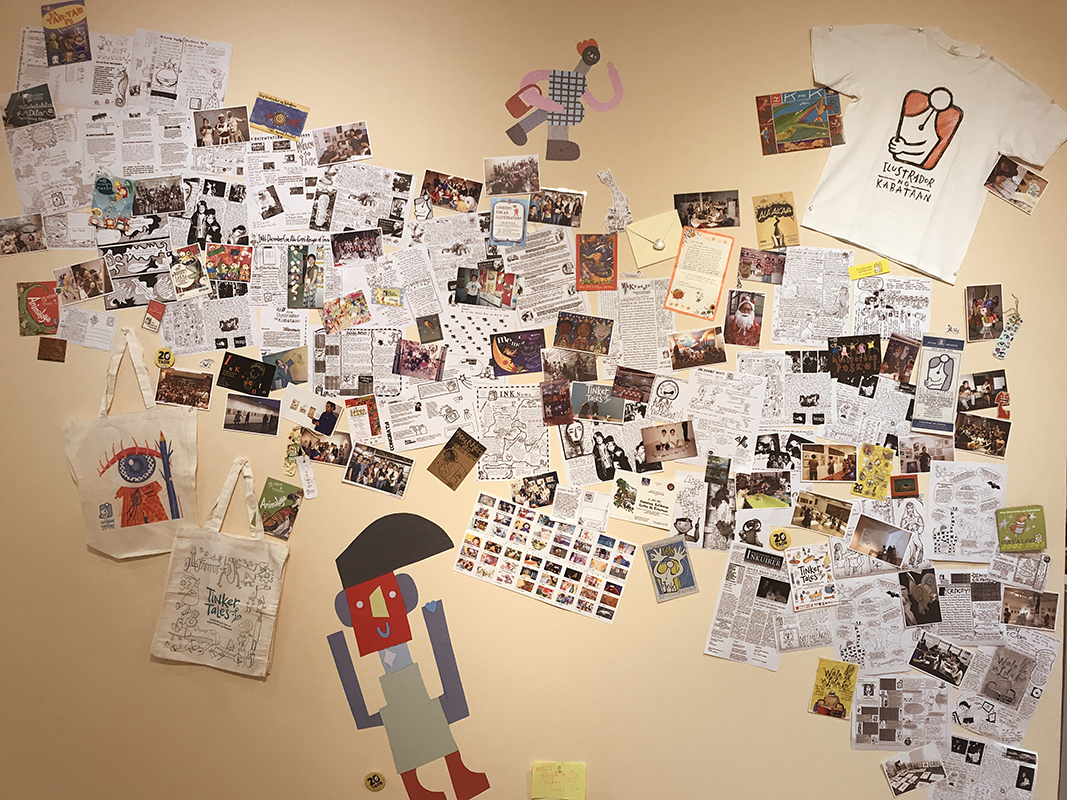 What made you join Ang INK when you did, and what was the organization up to at the time?

I joined in 2019, very recently, and it was because I was already a freelance illustrator. All the freelance illustrators that I knew at the time were on social media. As they were all my age or people I knew from college, I wanted to expand my circle of peers. I knew that Ang INK was full of illustrators of different ages and from other parts of the country, so I knew I would learn from them and interact with them. That’s why I joined.

They were up to the usual—they had their annual exhibit. They were holding monthly meetings, especially workshops, because they wanted us to submit to the Bologna Children’s Book Fair in Italy. So we would present our works for our annual exhibits and Bologna. Board members would give feedback, and we would all learn from that.

What activities and programs have continued up to the present?

We continue to have annual exhibits. The last two years have been primarily online, of course, but thankfully, we have a physical exhibit this year so it’s both digital and physical. We continue to have monthly meetings but on Google Meet, though we hope to meet again in person in the near future. We continue to inform our members of upcoming book fairs or competitions, and we always offer our help and feedback to those who wish to submit to them.

Ang INK’s 30th anniversary exhibition at the Ateneo Art Gallery (AAG) comprises "a wealth of memorabilia, collectibles, pubmats" to provide historical context to Ang INK as an organization. What led to conceptualizing the exhibition in this way?

This year is our 30th anniversary as Ang INK. The exhibit is called “INK Story.” It is literally the story of our organization. And the reason why it’s all these collectibles and these pubmats from our past events and from our past meetings is because Ang INK started as a very simple material organization. They would get together in person and draw together. They would have a newsletter that was simply photocopied and snail-mailed around and added along the way.

Our catalog of artworks used to be black-and-white xerox, copied whenever it was needed. It shows how we grew organically—and due to the passion of its first members—to where we can mark each year with something that’s valuable, whether it’s a tote bag of an exhibit or the catalog we release this other year, et cetera.

How has Ang INK evolved through the years in terms of aesthetics, culture, politics, etc.?

I’m one of the new members, so I can’t accurately say how they started. Ang INK evolved at the same pace as the artistic and publishing industries in the Philippines. Maybe sometimes we were a bit more ahead because Ang INK was a smaller group that could sense what was coming next or wanted to push boundaries. I would say as Philippine children’s literature began to touch on newer topics like inclusivity and sometimes even politics or difficult situations for children, our illustrations also began to reflect that. We always evolve in the direction of what we want to see more of.

What do you want to see more of in the children’s book industry?

We’ve already seen in children’s books where they begin to touch on child abuse, separation, LGBTQ+, people with disability, neurodivergence, and perspectives from different parts of the Philippines like those of indigenous children, because I think whenever we see indigenous stories, they would be about fantastical legends and folktales. They’re not necessarily from the perspective of an indigenous child. We’re trying to get more perspectives than the Class A, B urban child who lives in Metro Manila.

How do you gather these differing perspectives?

For one thing, Ang INK accepts anyone from anywhere in the Philippines. We even have members who live abroad. From that alone we see different perspectives that might be missing from Metro Manila-centric groups. We’ve done some projects lately which I’ll expand on more when we talk about how we make children’s literature more accessible where we have interviewed children, interacted with groups in schools. We also tried to work with writers and publishers that we know are dedicated to telling the same stories as ours. 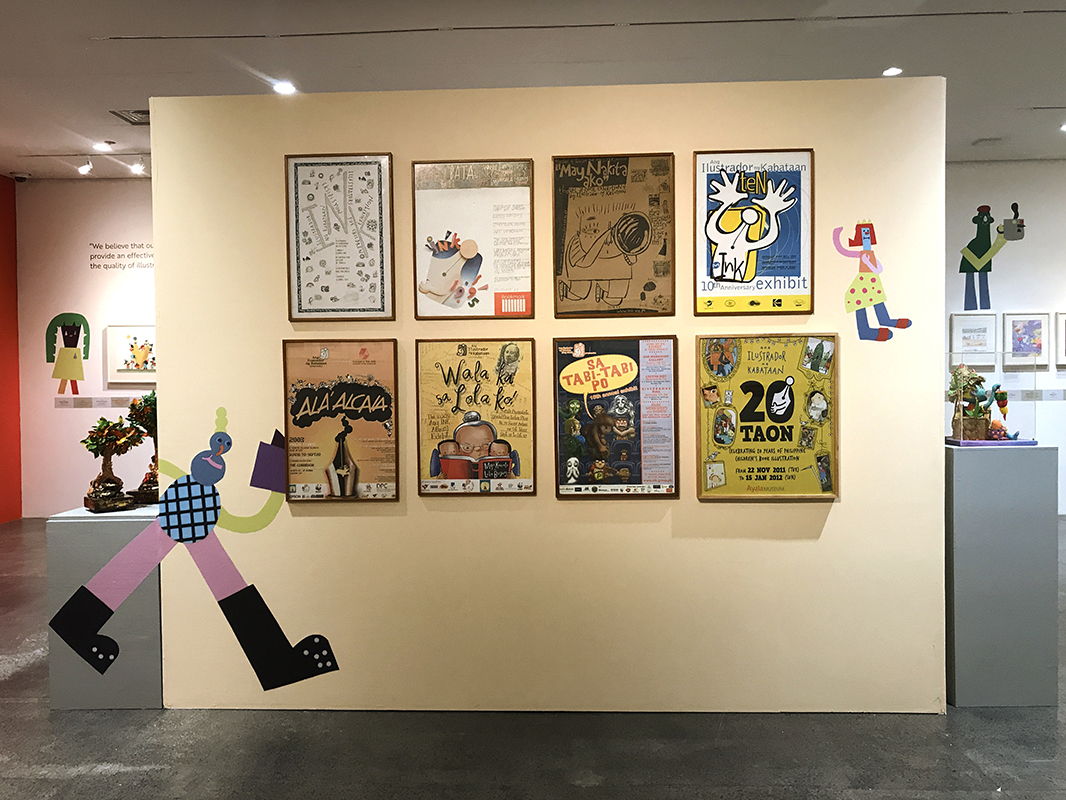 Can you describe how writers, illustrators, and publishers work together to complete a book project?

It’s always different from every project. The most typical one that many people know about is that the writer pitches the manuscript to the publisher, then the publisher finds an illustrator and then contracts them to illustrate for the book. I think that’s the most typical one. But many other times, the writer and the illustrator work in tandem to create a product or they pitch it together. Then the publisher is the one who propagates it. We would like illustrators to be even more involved in the making of the story because illustrators are the reason that half of the product exists and we’re not just photocopy factories being told what to do.

What are the common challenges illustrators face in the industry?

There are instances when illustrators are tapped later and just told what to draw or are considered secondary to the writer, even though the most obvious part of a children’s book usually is the illustration. Illustrators in the Philippines not only tend to receive less payment, less royalties; they’re usually not even part of the contract. Many publishers don’t even put the name of the illustrator on the book cover and it’s only written on the copyright section. Not only that, but many illustrators are also freelancers; it’s so hard to share market rates. So many illustrators are underpaid or don’t even know how to start in the industry. Many of them sometimes don’t even sign a contract. They just want the work and they might get abused.

If I were an illustrator, what should I do to work around these hurdles?

How does Ang INK make children’s literature more accessible to wider readership in this digital age and during the pandemic?

The clearest example is e-books. Many are selling e-books. There are programs like BuriBooks, which is an online library where you pay a fee, like Netflix for books. We also try to go the other way. We try to reach out to children in this time because I think for some publishers they want to pretend that it’s business as usual—make a book about this educational topic, and pass it out to kids, but we need to remember that there’s a lockdown happening at a very important part of their lives. They’re going to remember it forever, so we wanted to acknowledge that as well. So, when the lockdown first started, we actually made coloring pages and then posted them online for free for children stuck at home so that they could just print and color it and post it as well on social media.

And we accepted new members last year, but the whole application process and orientation were done online. We asked the newbies to make a batch project. What they did was really cool. They reached out to children in different communities through online interviews and then they illustrated the stories of those children in lockdown. And they made a book out of it. And then they donated the profits to an NGO.

It goes both ways. We want to be able to keep sharing stuff with kids, but we want to make sure that they’re having an outlet back to us. Another thing I didn’t realize was so popular now was online storytelling. There was a boom when the pandemic started. They would get teachers, actors, and they would give them a children’s book and then they would read it in an entertaining manner on YouTube and on Facebook so that it gives that experience to kids who needed help with reading or they like to hear storytelling. It’s another way of sharing the story.

What kind of children's book industry in the Philippines does Ang INK envision?

We want to see more stories that are not just from the perspective of your usual Class A, B Manileño kid who is able-bodied. “Typical” is the word used. We want to see ones that acknowledge certain struggles that children go through. We want to stop pretending that a children’s book is a product that is just manufactured, bought by parents, to make profits. Or it’s just something to gift and not to think about or remember. We want to show that children’s book illustration is not just about being cute, which is a very overused word. It’s not about being simple or easy. People think it’s easier to illustrate for children, but it’s so much harder, because you want something that will capture their attention, that will explain certain concepts to them that adults are very familiar with. How do you teach a child something for the first time?

That’s our responsibility. So, we want to show that illustration in children’s books is important enough that illustrators should be paid fair wages and that they should be given proper credit on the books they work on.

Nina Martinez is a PBBY award-winning illustrator in Makati City. She graduated in 2016 from the University of the Philippines with a BFA in Visual Communication. When she’s not drawing for a diverse range of media including books, video, and podcasts, she makes original comics about ghosts, girls, God, and growing up. Her illustration has been published by Adarna House and Bad Student, and she has forthcoming work with Goethe-Institut.