Meet Your Instructor: Steph Alvarez on Her Practice of Art

"With painting still life (in my class), students will learn the basic watercolor painting techniques, as well as color blending, shadows, etc. They will be trained how to look at an object and paint it as they see it." 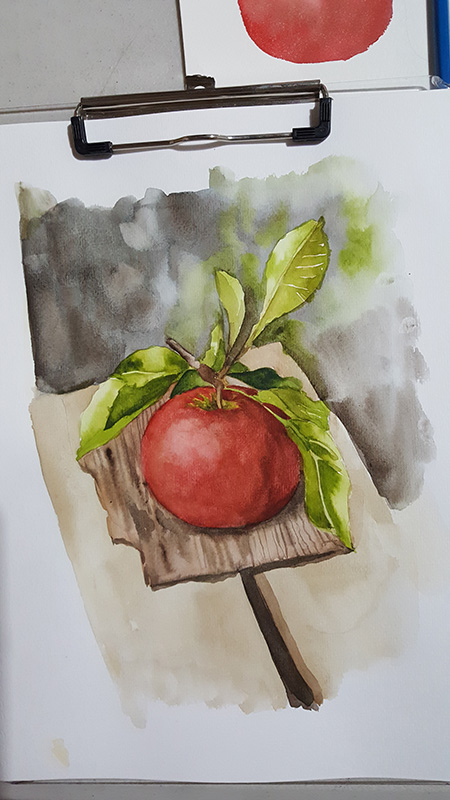 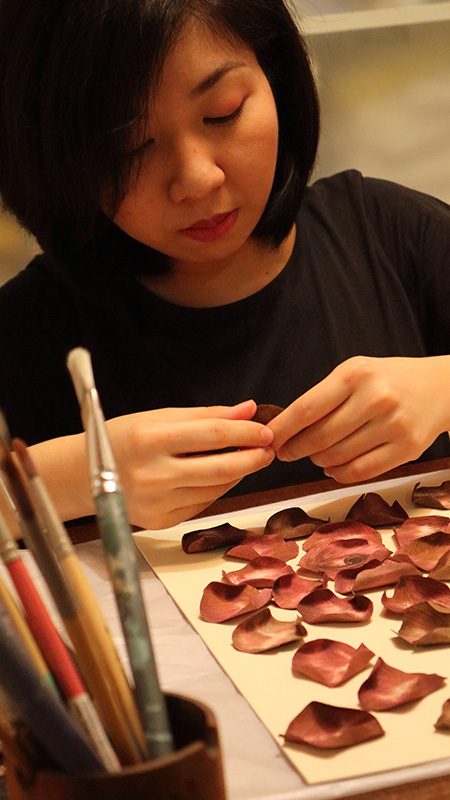 As a visual artist, Steph Alvarez is best known for her singular focus on watercolor and paper for her medium, through which she crafts narratives with themes surrounding self-identity, time, and spirituality. ‘Return of Saturn’, her first solo exhibition held earlier this year, introspected on these ideas through the eponymous astrological phenomenon — a critical turning point familiar to anyone entering thirty years of life. Her second show, ‘Spring Cleaning’, came some months later, expanded on the concept of compartmentalization as both conceit for the show and allusion for coping.

In these shows and in the countless group shows she has exhibited in, central to Alvarez’s expression is the miraculous rose petal motif, inspired by the Marian apparitions and her mother’s garden. Alvarez also has a background in illustration and has provided her services to various brands. For “Step into Your Comfort Zone”, a commissioned series of portraits of inspiring Filipina women by Avon Philippines, Alvarez based the design and composition of each 22 x 30-inch watercolor work on the stories and personalities of the women. “There is vulnerability and softness in baring yourself, either physically or emotionally,” Alvarez wrote. “I wanted to portray that through an overall soft, delicate look and feel in the portraits.”

When not working on commissions or personal paintings, Alvarez conducts watercolor workshops where available. She has regularly conducted workshops around Metro Manila and in Cebu City to date and was a beloved instructor for Cartellino School’s pilot classes, held earlier this year.

The Cartellino Team did a quickfire with Alvarez on how it’s been, her fascination with watercolor, and more behind her upcoming class for Cartellino School, Basic Still Life in Watercolor. Class enrollment continues until November 21, 11:59 PM. 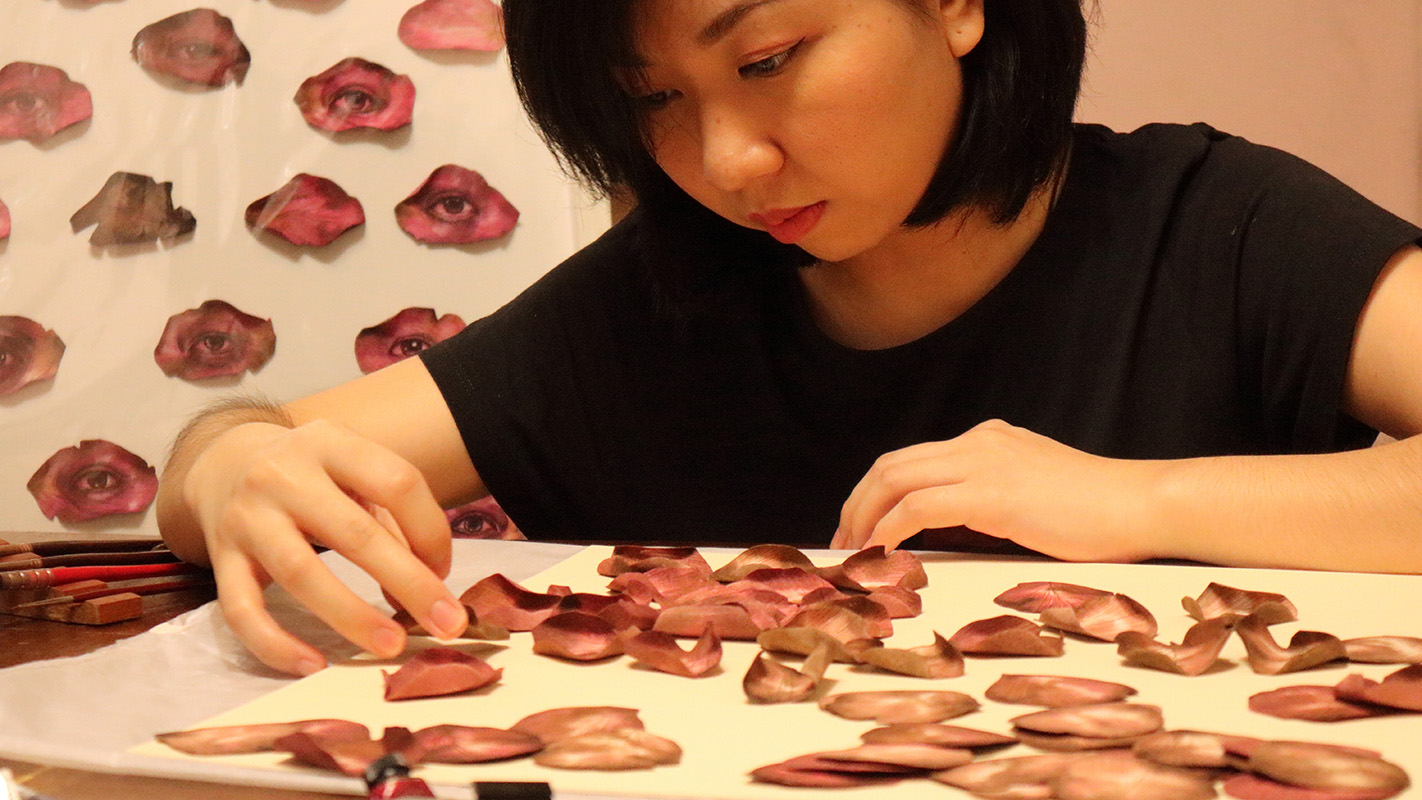 Let's start with progression. How and when did you get into art?

I always loved to draw ever since as a child. Even when I was in grade school, I knew I wanted to take a job that is art-related. Even though I took up Architecture, after getting my license and working for a while, I completely pursued art as a career. It was really something I wanted to do ever since.

What initiated the shift from being a licensed architect to becoming an artist? What were your thoughts at the time during this transition?

As mentioned, I've always wanted to work as an artist but my parents wanted me to take a more technical course, which is why I took up Architecture. When I was already working as an architect at an office, I was also taking in illustration jobs as a sideline job. It came to a point where both jobs became equally demanding, and I knew I had to make a choice, so I left my office job at that time and pursued a career as an illustrator and portrait artist full-time. It felt like the right thing to do at that time.

How have your thoughts, feelings changed since then, and especially after this past year -- when you have put out your first two solo exhibitions?

It is definitely fulfilling, especially after having put out 2 solo exhibitions already. I feel like this is something that I will be doing for a very long time. But I know also how much hard work is needed -- as experienced recently -- but I have already accepted that.

Of all the mediums you're skilled in, watercolor has been the top of the bunch. What is it about the medium that excites you?

I like how the medium can give soft and delicate outputs, but at the same time can also be solid and commanding, depending on the application. It can be a bit unpredictable, considering also how the medium behaves on paper/surface. 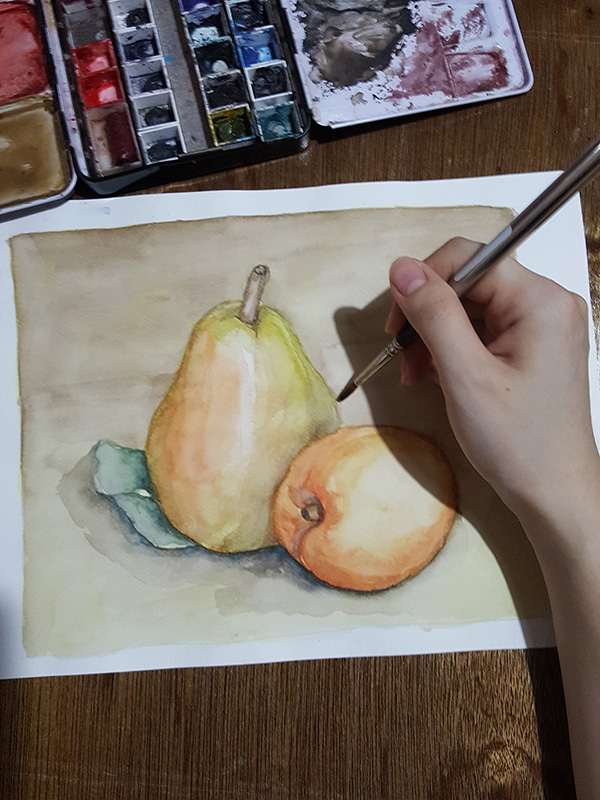 How differently does it behave from acrylics, say?

What goes into learning still life painting for the first time around?

I think, with learning watercolor for the first time, that it would be good to learn first how to paint still life. You can practice most of the basic techniques with painting still life, and it is a lot easier than painting portraits. With painting still life (in my class), students will learn the basic watercolor painting techniques, as well as color blending, shadows, etc. They will be trained how to look at an object and paint it as they see it.

What advice would you give to the past you who was starting with art, maybe, too, to the students thinking of taking your class?

Don't be afraid to start. It might be a little daunting to learn a medium or a skill at first. Mistakes are expected during the first tries, but as you continue to practice, for sure you'll be a lot better than you were when you first started.