I see writing as a form of attentiveness. It requires an earnest engagement with material—quite the typical sentiment actually. Surely, writing is laborious. It requires time and energy. Moreover, it also demands a willingness to create a space hospitable to the encounter between the object of writing and its experience, the writer and the writing activity, the reader. Writing is a form of attentiveness not only towards its object but also towards the capacity of the written thing to craft this space wherein affective relations among object, writer, reader are cultivated—from interest or intimacy, excitement or even anxiety.

The essayist Maggie Nelson thinks about writing as “an activity that demands an attentiveness—a relentlessness, even—whose very rigor tips it into ardor.” I find this sentiment quite compelling in my own approach to writing: attentiveness cultivates a sense of care or responsibility for what I am writing about—and how I am writing about it—that for me aspires to ardor. Although, I prefer to think about it in terms of being ardent. Being ardent sits in the space between ardor (intensity, passion, eagerness) and arduousness (difficulty or strain). It becomes less of a feeling than a disposition. A form of devotion, or perhaps, a commitment to a text or image.

Ardent readings thrive on enthusiasm, a vitality that motivates. I prefer ardent readings over critical ones. Critique has the tendency to burden and exhaust the material, the writer, the reader. Its motivation is to anticipate an effect based on the self-sufficient prowess of its author. At its best, critique illuminates and uncovers connections and implications. At its worst, it pre-empts an experience of material in favor of seamless structure or complete understanding. On top of this, it overinvests in the idea of the critic and their attendant authority and mastery. Critical readings show us one way of relating to a material usually based off a singular, self-sufficient understanding—at the expense of other forms of engagements, schemas of meaning-making, other horizons of encounter.

Paintings by Bree Jonson: [Left] Drunk man breaks in I, oil on canvas (2018); [Right] Drunk man breaks in II, oil on canvas (2018). Image of exhibition view courtesy of the UP Vargas Museum as part of the part of the exhibition Displace, Embody that ran from December 17, 2020 to February 13, 2021 at the UP Vargas Museum.
Delete

I remember standing before two oil-on-canvas paintings by artist Bree Jonson and being captivated—perhaps by an earnest curiosity, or by an unusual anxiety. They were hung on a wall at the UP Vargas Museum’s first floor stairway landing, a quick breaker before you reach the 2nd floor. A transitional space between floors. Facing the paintings is one of those moments when I see what is before me: I can make out the figures and perhaps formulate a narrative based on what I see, but there was an unease which pushed me to look more closely, look again and more carefully.

On a smaller canvas, we see a tiger in the corner of an empty room. There is a black square on the wall behind it—a portal or a painting. A naked man is grasping the animal’s neck, legs fastened around the beast’s underbelly, wrapped around its torso. The tiger’s demeanor is calm, face turned towards the man, almost towards the viewer. From my perspective the man seems to meet the feline’s gaze.

On a slightly larger canvas, we find the same characters. In a grove, a man in what seems to be a shirt and a pair of pants lies supine. Before him is a tiger. Surrounding them is lush foliage draping from the edge of the canvas, framing the unfolding encounter, obscuring from view the tiger’s face. Light pools in the foreground. The mise-en-scène creates the effect that we are at a safe distance from what is to transpire.

The titles do not tell us that much: the paintings are titled Drunk man breaks in I and II (2018). There is a man and he might be drunk. He breaks in where? There is an air of intimacy and vulnerability in the paintings that I am not sure what to make of. The man hangs tight from the animal as if as soon as any of his limbs touch the floor the beast will recognize him as a creature apart from itself. The man lying on the forest ground stays still as if in the hopes of boring the animal, his composure will save him. These narrations propose how to read these images, and as a writer I want these possibilities to prosper.

This is how I imagine how an ardent reading proceeds. It is a decision to “trust in [texts or images] to remain powerful, refractory, and exemplary.”1 While the images confront us with the barest of indication about what might be happening in medias res, it is the activity of reading ardently that imagines contexts wherein these paintings tell us something compelling about the world in which they exist, the intelligence of the artist to mobilize meanings surrounding these compositions, and even our own attempts at making meaning out of the encounters presented to us by the works. Ardent readings constitute a commitment to see the images through their potentialities, an agentive activity that invests in the work of the artist as a gift of “feel[ing] along with it as with a thing that is like no other.”2 Within this framework, I approach images always with the conviction that it tells us something about the world and the work, the artist, and even about myself and why I pay attention to what I pay attention to. This becomes analogous to what queer scholar Eve Kosofsky Sedgwick nominates as “reparative” reading (as opposed to a “paranoid” one), wherein the practice “assemble[s] and confer[s] plenitude on an object that will then have resources to offer an inchoate self.”3 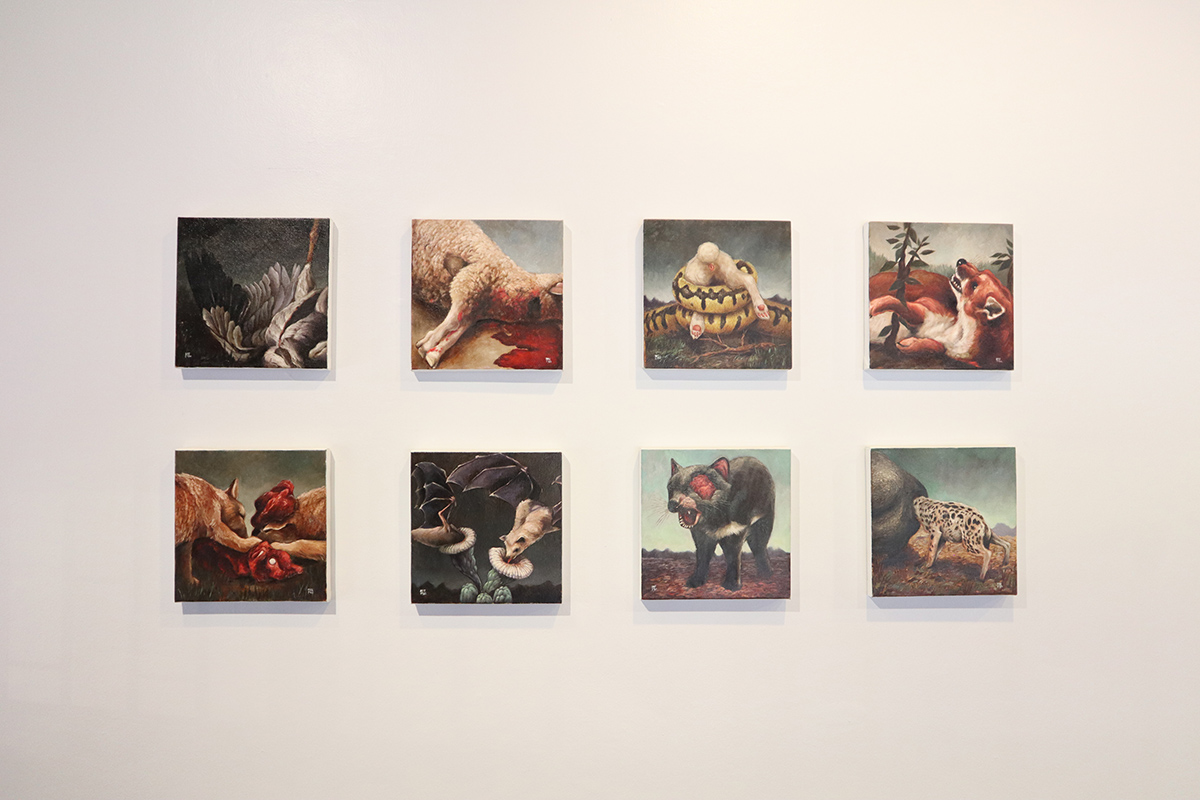 There is a calmness in the two encounters that ease us into the possibility of annotation. It is the same calm that refuses the typical dichotomy of civilized man and wild animal. Ardent readings lead us to the emergence of something exemplary or to finding felicity in forms or articulations not readily recognizable as such. The captivity—by a curiosity or an anxiety—does not fully flesh itself out until our attention is caught by a series of paintings next to the two images in question. In the series of square canvases, we see animals in different stages of capture: a fruit bat stuck in the cavity of a flower, a rabbit trapped in the tightening embrace of a snake, a fox caught in a thorny shrub, a bull falling prey to a wolf, and other images of animals in the face of captivity—by other animals, their environment, by humans. The last one comes as an allusion: a lamb bleeds out from a clean slit in its neck—inflicted by a weapon sharp enough to cut through flesh and a force strong enough to create an immaculate incision. I value writing that allows for these kinds of auspiciousness, the kind that leads us to discovery, moments of contingent clarity, or in the words of the late critic Alice Guillermo: “the pleasure of discovering serendipitous insight or calm felicities of contemplation.”4

[3] Eve Kosofsky Sedgwick, “Paranoid Reading and Reparative Reading, Or, You’re so Paranoid, You Probably Think this Essay is about You,” in Touching Feeling: Affect, Pedagogy, Performativity (Durham: Duke University Press, 2003), 149.

On Art Writing is an ongoing series of opinion essays based on the prompt of the role of art writing today, as understood by the contributing art writers, researchers, and journalists. This essay, 'Ardent readings', is in part occasioned by Carlos's involvement as a co-instructor with Alain Zedrick Camiling for the Arts Writing Course at Cartellino School. The enrollment is ongoing until November 17.

Carlos Quijon, Jr. is a critic and curator based in Manila. He is a fellow of the research platform Modern Art Histories in and across Africa, South and Southeast Asia (MAHASSA), convened by the Getty Foundation’s Connecting Art Histories project.

He writes exhibition reviews for Artforum and Frieze. His essays are part of the books Writing Presently (Manila: Philippine Contemporary Art Network, 2019) and From a History of Exhibitions Towards a Future of Exhibition-Making (Berlin: Sternberg Press, 2019). He has published or have forthcoming publications in Southeast of Now: Directions in Contemporary and Modern Art, Afro-Asian Visions, MoMA’s post (US), Queer Southeast Asia, ArtReview Asia (Singapore), Art Monthly (UK), Asia Art Archive's Ideas (HK), and Trans Asia Photography Review (US), among others. He curated Courses of Action in Hong Kong in 2019, a will for prolific disclosures in Manila, co-curated Minor Infelicities in Seoul in 2020 and In Our Best Interests in Singapore in January. He is co-curator of the exhibition Cast But One Shadow: Afro-Southeast Asian Affinities at the UP Vargas Museum.