The tarot can hardly be confined in the realm of the occult and the divination arts alone. It has permeated visual arts as well, where many contemporary artists derive pleasure in altering it and using it as a framing device. Its open structure generously lends itself to manifold interpretations; thus, appealing to the artist’s desire to skillfully fashion reality and cast a spotlight on issues or things often left out by history books or mainstream media where partial truths are ubiquitously deployed. This overarching ability to transcribe reality the tarot ever subtly proffers has led to tarot decks of various designs, recalibrated in large measure to counter faux truths which could have otherwise escaped public attention if not rendered in the playful visual semantics of the tarot. The same attitude of approaching the tarot is observed in the works of Filipino artists, like Brenda Fajardo, Manix Abrera, and Iya Regalario, who have altered the prototypical tarot design and assiduously codified its formal elements in accord to a particular worldview or milieu to which they strongly identify.

Like so many politically-inclined artists of her time, printmaker, visual artist, and educator Brenda Fajardo intends her art to vividly bring attention to the socio-political conditions that plague the country, particularly the plight of women and the struggle of those in the margins of society. In Fajardo’s hands, the tarot cards are not just mere tools to divine the future but effective framing devices to portray, or more ambitiously, to direct the Filipino consciousness towards a more in-depth understanding of its colonial past. In her work Ang Kaaway pala ni Huwan ay si Don Pepe at Donya Pilar, the figures are interestingly drawn in flat 2-D with jagged strokes, almost reminiscent of sketches drawn by a child.

This is not to mask Fajardo’s ‘lack’ of ‘skills’ or ‘talent’ but to deliberately express her emotional angst against the classical tradition of art that had been established in the Spanish colonial period, which directed taste exclusively toward an academic style, as practiced only by those trained in prestigious art schools known as academia. Fajardo further imbued her deck with folk and mythological characters and objects from the country’s colonial and precolonial past, such as the ermitanyo (local equivalent of a hermit), demonyo (devil), and punyal (dagger) to deconstruct popular memory as laid out by colonizers, revealing the painful reality that Filipinos suffer injustice much more in the hands of their fellowmen. 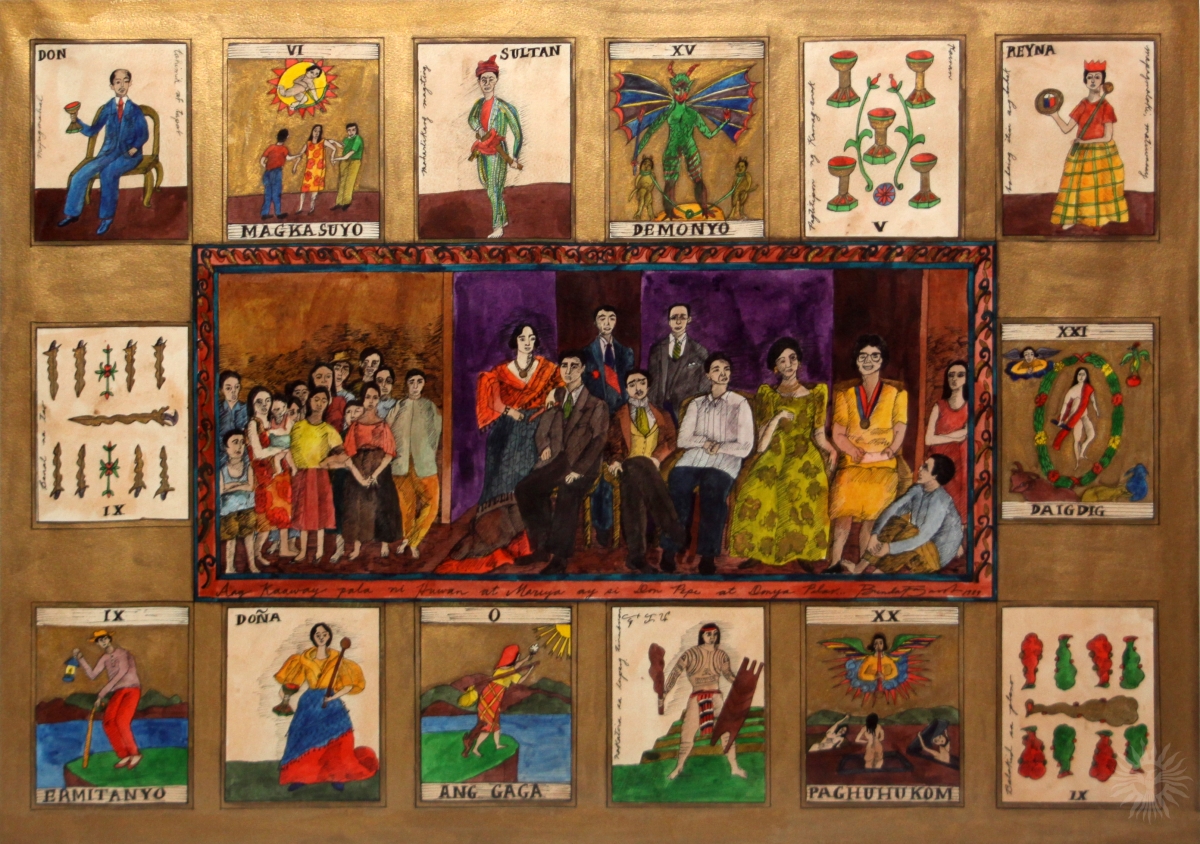 Traversing the same path is visual artist Patria “Iya” Regalario, who appropriates the tarot to present her moral view of the world by foregrounding malevolent and inhumane acts and practices prevalent in Philippine society. As part of her larger ongoing series Los Indios Filipinos, Abreya released her rendition of the tarot titled Manos: Suit of Hands or simply Manos. Her tarot deck is comprised of 14 wooden cards created through an age-old art technique called pyrography, where a heated metallic point is used to burn a design on a wooden or leather surface. Replete in this suit is what philosopher Aristotle dubbed as “the tool of all tools” — that is, the hands. The hands, which is termed as “manos” in Spanish, are intentionally used as the title to distinctively stress the colonial connection with Spain, which occupied the Philippines for almost three centuries. Interestingly, almost all the cards in the suit have an illustrated hand drawn in a symmetrical manner that are striking in their congruency.

The illustrated hands in the deck testify to how Regalado has perfected the art of drawing hands, which is deemed difficult by many. It is also hard not to note that the title of each card on the deck plays with the word “hand”. For example, King of Hands alludes to the deep-seated disease of corruption and the ridiculous amount of hypocrisy that continuously plague most of the organized religions in the Philippines. In the card, the seemingly pious figure clad in pastoral garb mouths his praises to the sky while surrounding hands blindly offer alms in the form of money. Unbeknownst to them, most, if not all, of the money they donated will just be embezzled. The card Knight of Hands, on the same note, also deals with corruption—that of a deceptive kind of kindness, which gives with expectation of something in return and exploits the weakness of the poor. This kind of maligned practice is most evident during the election period in the Philippines, where politicians assume the role of a “knight,” especially when there are cameras around to put up a show and gain supporters. 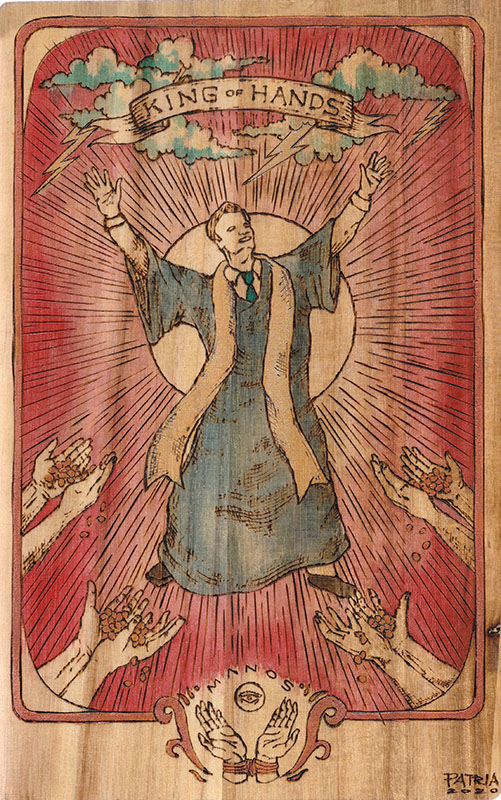 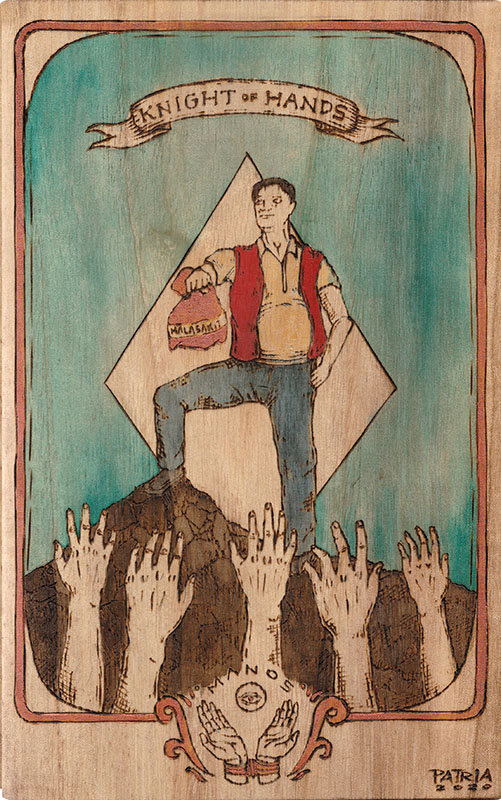 Deviating from a discursive take on the tarot is multi-awarded cartoonist and comic artist Manix Abrera with his hand-drawn tarot deck comprised of 89 cards exhibited in a one-man show ‘Samantala, Ikaw at Hiwaga’ at Galerie Stephanie. Unlike Fajardo and Regalario, the tarot cards of Abrera, though spectacular and adorable, do not diverge a great deal from the prototypical tarot and confines the alteration only with the stylistics. The archetypal characters presented in the cards still bear the conventional titles (e.g., King of Wands, King of Pentacles, Queen of Cups); and the artist maintains much, if not all, of the symbolism present in the prototypical tarot deck. Despite this, Abrera altered them and made them his own by injecting his recognized way of drawing. Viewers of his tarot deck can easily recognize the undeniable Manix-esque style etched all over the black-and-white graphite drawings, particularly the unnamed quirky male character that has graced much of the pages of his many prior komiks, like the Kikomachine series. 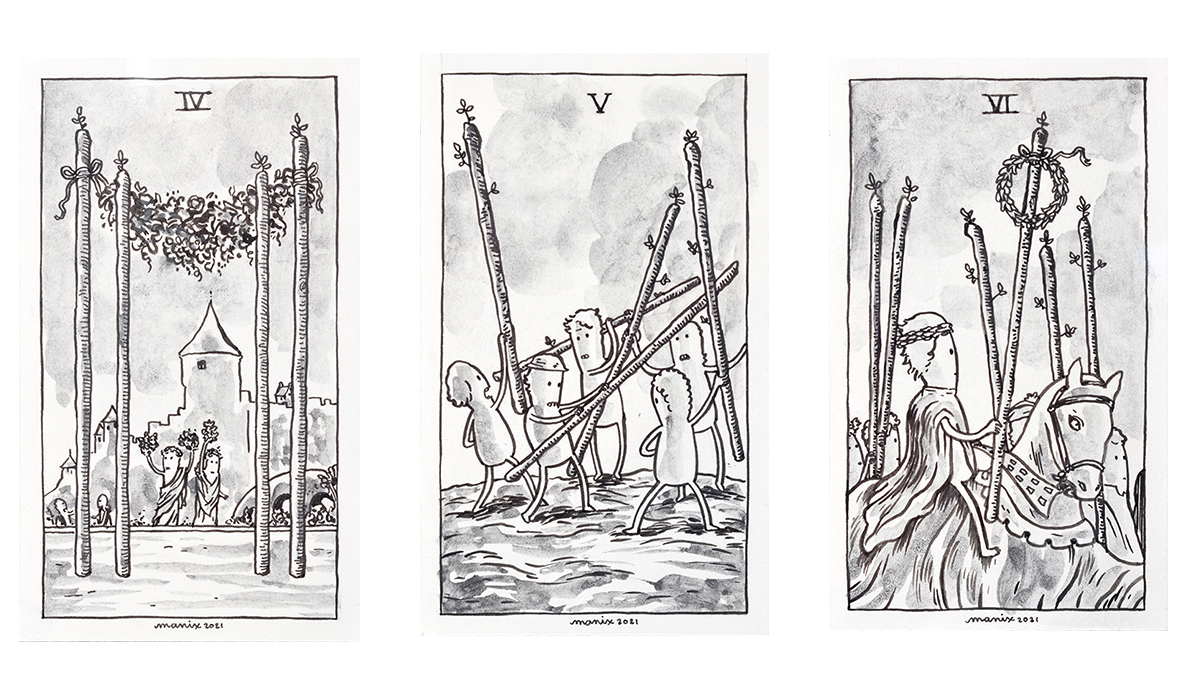 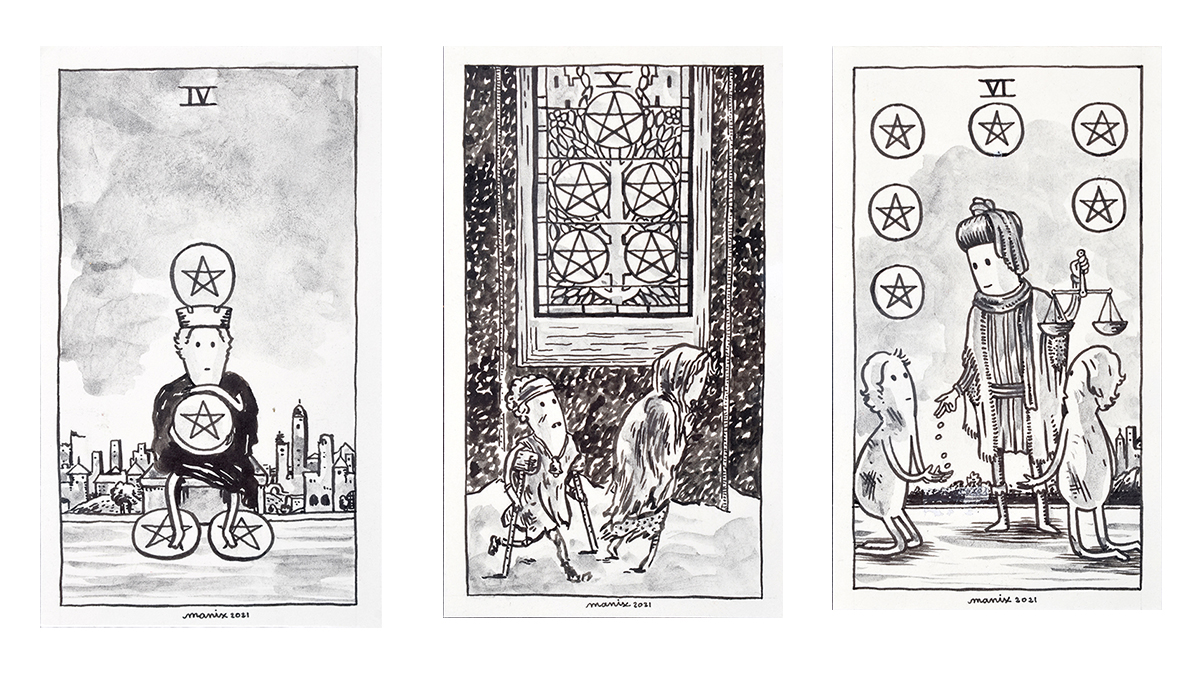 By giving viewers an important role as determiner of meaning through tarot cards infused with local elements and imagery, these three Filipino artists effectively embody the postmodernist spirit in their art, akin to the way Andy Warhol radically subverted modernist aesthetic practices by placing silkscreened photographs of popular icon Marilyn Monroe in diptychs (which reference the Christian church). Fajardo, Abrera, and Regalario’s postmodernist attitude manifests in what theorist Charles Jencks termed as “double-coding” or the strategy of affirming or denying the existing power structures through plurality and play of many voices, particularly those of the “silenced.” Fajardo demonstrates double-coding in her tarot as she portrays her figures in flat, jagged strokes, aiding in the breaking down of distinctions between high-art and low-art; Regalario, by challenging conventional but often flawed ways of thinking for the sake of what society often dismissed as “Other”; and Abrera as he embodies a “postmodern artist” who enjoys mixing influences, processes, and texts gleaned from both traditional and popular culture. By manipulating codes, symbols, imagery, and collective signs in their tarot cards, the artists voice out a need for a reshuffling of the existing order in Philippine society. The increasing number of tarot cards re-contextualized can hence be a symptom of an extremely polarized society in dire need of equality, where artists are beyond resolute in wielding command over the disturbingly unknown future that the government or even the well-meaning NGOs have failed to tame.