Lessons in Love and Lockdown from a Bowl of Las-wa

If a bowl of soup could tell a story during one of the most turbulent times in recent history, it's one of memory and comfort. For Negrense artist Katarina Estrada, the soup was a bowl of Las-wa.

Though currently locked down in Manila, Katarina is still very much an Ilongga. She’s been an official artist since 2017, focusing her subjects on the human body and memory. She is part of ‘Istorya Namon Subong (Our Stories Now)’, continuing at Salcedo Private Auction until May 8.

An act of service is a kind of love language, one that Katarina and her family speak fluently. It’s a language focused on actions that speak louder than words, an expression done for a loved one. When describing what she learned over lockdown, Katarina said she learned how to cook, herself having come from a family whose act of service is to cook and bond over mealtime. By connecting love and food (a very Negrense thing to do), it brought about the idea of her triptych set, which displays the process of gathering and cooking to the rebirth of the artist coming out of this new normal. Like a recipe book, Katarina’s art takes on an almost step-by-step process until finish. 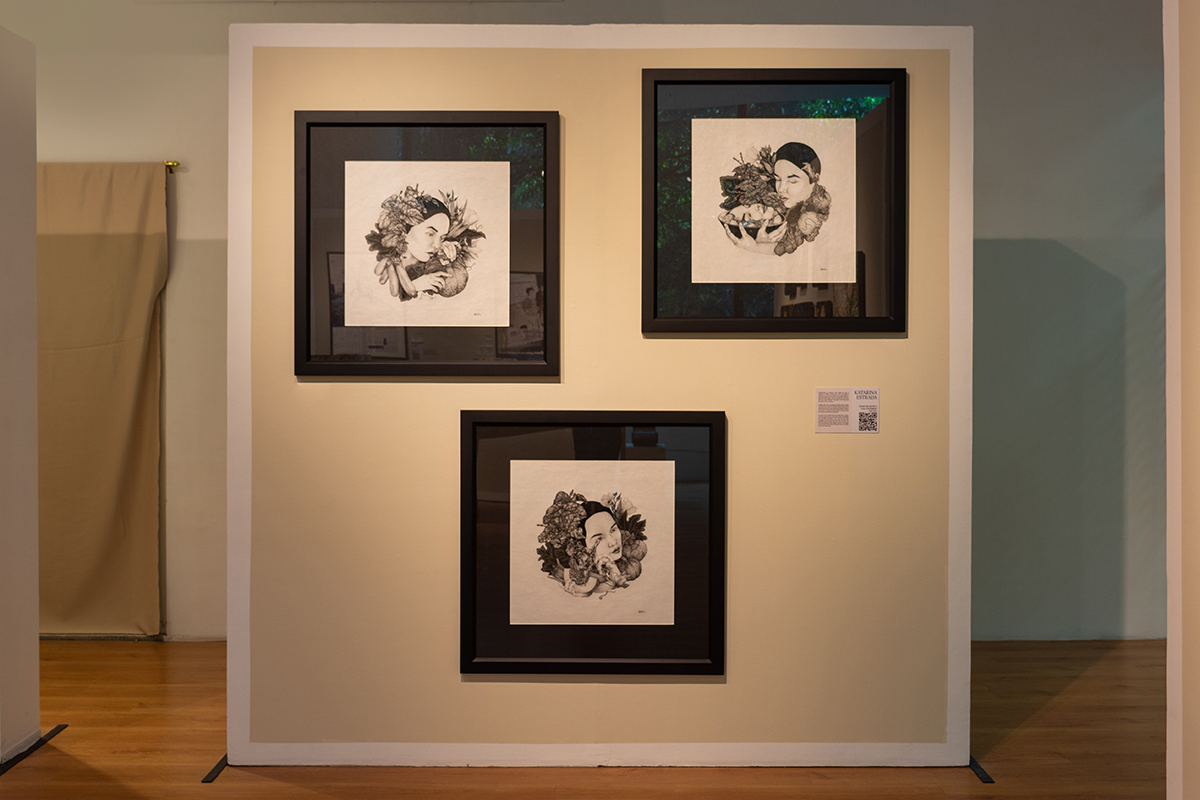 The artist admitted that she did struggle with finding out how to execute her concept. She described using free association as a method of ideation, connecting words to one another. Doing away with the notion of showing pots and pans, Katarina chose the plants that create the soup by seeing herself as part of the ingredients, the talong, the kalabasa, the okra, the sitaw, growing and maturing the way vegetables do when they’re ready for cooking.

When she moved to her grandparents’ home in Bacolod as a child, Las-wa was served almost every day. Coupled with the tenderness during her stay, the simplicity of Las-wa is what turned this slippery soup into her favorite go-to comfort food. “I love it. I love Las-wa. I can’t explain it. It’s a simple dish, and it reminds me of my growing up in Bacolod with my grandparents.” One funny moment was when she talked about force-feeding her boyfriend the dish because she was trying to explain how good it was: “I cooked it for him. Siyempre, in my brain, I was like, ‘it’s so good.’ It was just me, pala.”

Heading into the uncertainties of lockdown, Katarina went back and thought about how most adults craving the security and safety of their childhood is what a lot of people hearken back to, in turn forming her response for the exhibition prompt: “How has the lockdown affected your experience as a Negrense artist?”

As a product of both cities, the artist expressed how, though she has been in Manila for most of the lockdown, she considers herself from Bacolod and struggled with how to represent this side of herself. “How do I show I’m a Negrense?” Having a foot in both worlds, she sought to create a self-portrait where she was the root, the base ingredient that takes from her memory of security and safety, transforming that into something new of her own making. 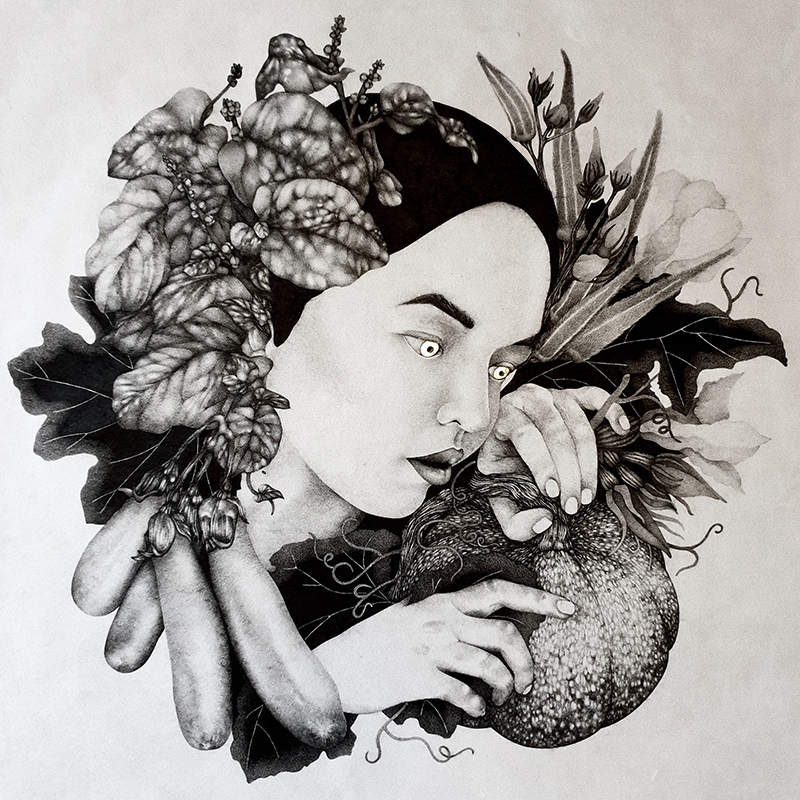 In her first piece, Puknit, “to pick,” she is the soil and the “tool.” Vegetables grow from her ears and eyes as she harvests them for meal prep. Every lesson she learned during the pandemic turned into ingredients for the soup, in turn presenting the artist as a product of these lessons. Each mature leaf was like a lesson ripe for use. The second piece, Buklan, “to boil,” depicts her pouring out her soul into the dish. She described this process as mindfully dealing with difficult emotions. Lessons, though hard, though painful, are necessary. When finished, the result transforms the ingredients to extract the best flavor from her.

In the final, titular piece, the artist faces herself in a bowl of Las-wa, the last step in what she describes as a cyclical process that takes her on a journey, with the end being self-mastery. Taking the growth of a person into account and how it’s continuous, Katarina adds, “this is the final me for this time in my life. It’ll change soon enough.” The vegetables growing out of her small and not as bountiful as the first piece; Katarina knows that growth doesn’t stop once something is harvested. It’s a bowl of lessons learned and transformed into an act of love both made of Katarina and by her.

“I find it funny that in 2020 I was so engrossed with drawing the body, seeing it as a landscape –  I still see it as that but when I shifted to 2021, I hyper-focused on faces. It’s like identity. Maybe by 2022, I’ll stick them together. If Picasso has his color periods, me, I have my body part periods.” 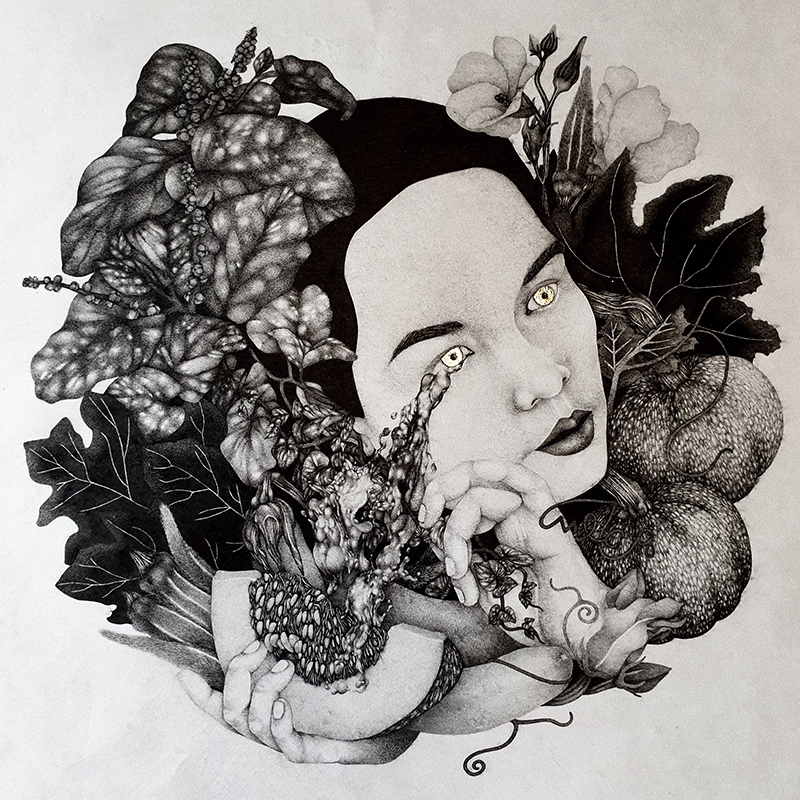 Katarina had a keen interest in paper since she was a child, starting with a memory of collecting stationary. It backgrounds her career as an artist, which, she explains, is her “on a mission to find the kind of paper that pushes the limits of what pen and ink can do.” Katarina specifically looked for paper that felt like cloth - jokingly, she wonders why she didn’t work on canvas - and found Hanji paper. Unfortunately, this kind of paper is only found in Korea. But, by a stroke of luck, she was accepted into a residency in Korea and was able to collect her exhibit paper then.

The thing about Hanji paper is that it’s handmade and uneven in some parts, strong enough to work with resin, and acts like fabric, being hard to tear. Katarina speculated about how she wants to continue to play with the materiality of the paper in the future. “I like the texture, I like the grit. And it’s funny because since I use pen and ink, I’ve always had an issue (not really an issue, she laughs) with control, and by that I mean, I’ve been critical with my technique. As in, it has to be a certain way because if I make a mistake, I can’t have that.” 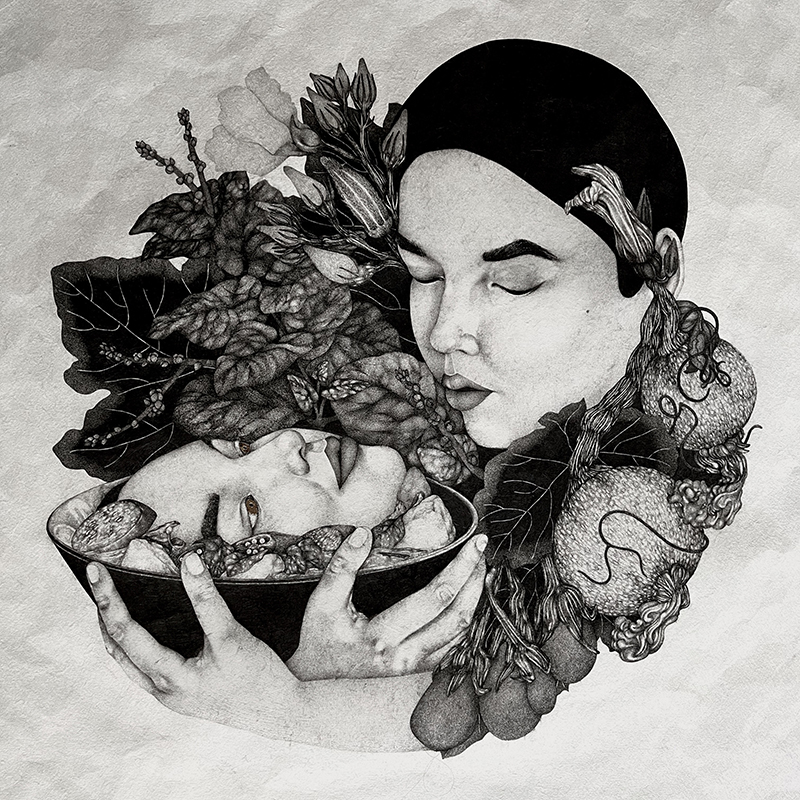 However, she describes working with Hanji paper and how sometimes the fibers break and how there are points when parts of the paper snag or are destroyed the way old sweaters would after too much friction. She first discovered the paper’s reaction that way when she first used it for Art Fair, 2020. “In my mind, I thought it was destroyed and then I told myself that, no, this is a way to let go of those control issues.”

Knowing that there are imperfections in almost everything, Katarina goes a step further to combat those feelings. She intentionally breaks fibers or crumples the work. “In general that’s what I like to do now, with works that I do on Hanji paper. I know that I did all this work, I poured everything into it. But after, there’s a sense of freedom to help me let go. It’s kind of like destroying it, but then I’m also not mad that I did.” Katarina adds that it’s a way for her not to get too attached to what she creates, how everything changes, and how everything is dynamic.

Katarina draws herself with purpose in every line, curve, and shade. It’s hard not to feel a deep sense of intimacy as she takes a magnifying glass to herself and her memories. She draws the eye to herself: the main ingredient and the outcome. Through her work, we are invited to meet her head-on, face to face.

Katarina Estrada is one of the eight Negrense women exhibiting for 'Istorya Namon Subong' at Salcedo Private Auction, now on its last week.

All images courtesy of the artist and Salcedo Private Auction.

Editor's note: Christina Campos likes to write things about art. If you would like to support, you can tap the button below to buy her a coffee.