The multimedia artworks of Dashiell Manley, which have gone and been exhibited in nearly all the art world's centers to significant acclaim, hadn't yet touched down in Asia. That was at least the case until August 1 this year, when five of his Elegy paintings were revealed on display at Silverlens Galleries for the Los Angeles-based artist's eponymous exhibition and continental debut.

Rhythmic, oil-thick, and done in a meditative state, Manley's Elegy paintings came about as the artist's way to flush out the distressing news he had processed to create works for his longer-running series, Newspaper Paintings. The five Elegy works (available for physical viewing until September 12) are the ones that managed the trip overseas. It's only half the show.

The other half, concurrently on view at Manley's L.A. studio, comprises the artist's latest additions to Newspaper Paintings: colorful canvases awash with contents transcribed from our local press, Rappler, made in consideration for his Asian premier. In these works, Manley's no simple scrivener. Scrawled in every direction are words shuffled and reordered, some of which are written larger than others.

A Newspaper work cuts across as if it were a reverse record of the day. A container of incoherent events describing not the news but, more accurately, the vertigo that comes with reading it. Looking at the Elegy works with that in mind, wouldn't it be more preferable for us, too, to sometimes stop and see the world as flowers do? 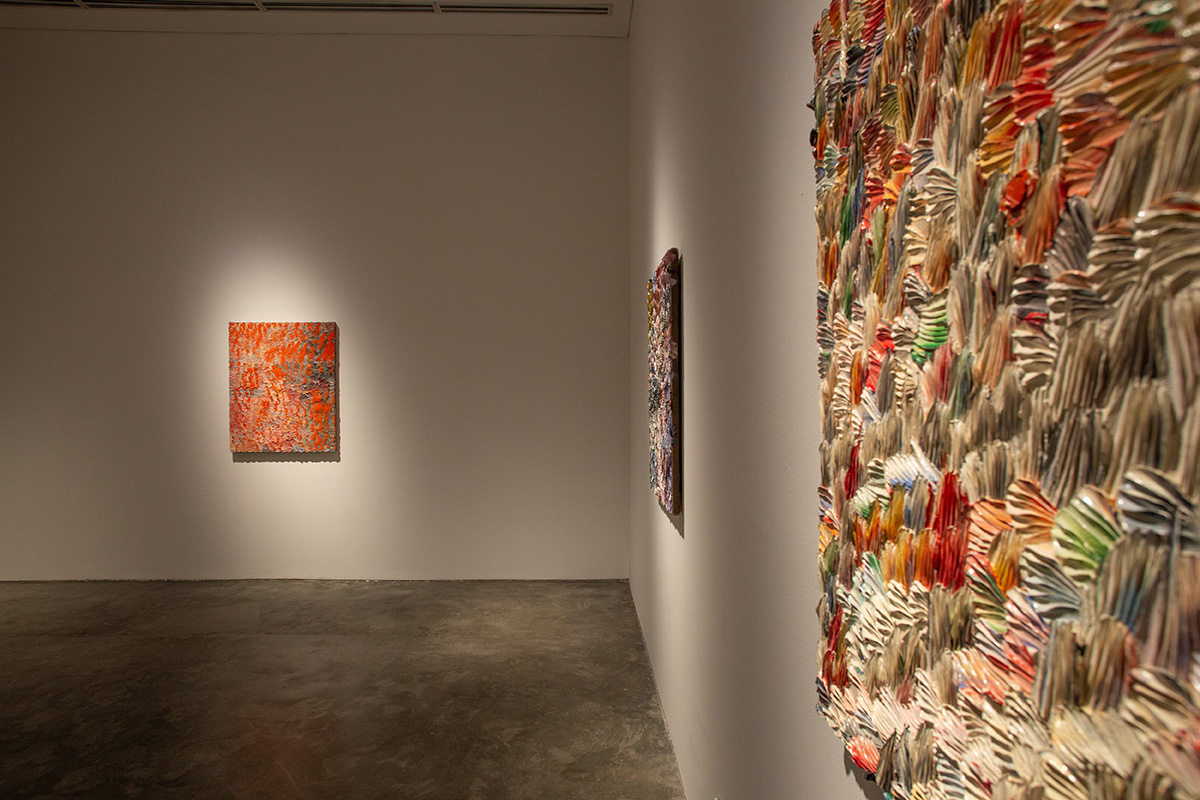 C: Going in, we learn that your Elegy series came from you meditating out the distressing news you absorbed for a previous series, Newspaper Paintings. What was it like having to revisit news in that way, given the present goings-on, to make new newspaper paintings based on Rappler?

DM: Well, thankfully, I worked on the Rappler newspaper works in the fall of 2019, so even though there was quite a bit going on at the time, it feels like it was a different era. That being said, since beginning the newspaper works in 2014, I have continued to make them. If some time has passed since I’ve made a newspaper work, the experience of going back into the work (and the subsequent news) can be a little jarring and certainly overwhelming.

C: Can you walk us through your process in making and titling an Elegy piece? How do you tap into the idea of each piece as a landscape? How did you settle on undulating patterns as a recurring motif?

DM: Considering the linkage between the two bodies of work (although the relationship was more direct early on), the element that bridges them is really feeling based. I am speaking particularly of my mindset going into making the work as opposed to a feeling I want the viewer to get. The Elegy works started as exercises in meditation, as a way to both focus and distract myself simultaneously and produce something that, in some ways, stood in as a record of that process.

The idea of these works as landscapes (and in some cases still lives) comes from thinking about a couple of different ideas. After some time painting Elegy’s and, in a way dumping these unwanted ideas and feelings into them, I started to think about the paintings as these kinds of theoretical landfills, landfills of course being perhaps the most problematic but important landscapes on the planet. I started to imagine what these spaces could look like instead of what they do. They are not representational paintings.

This led me to reconsider the still life as a contained ‘landscape’ within my studio. In turn, this led me to think about the relationship between painter and subject and the idea of bestowing the subject matter with sight. I tried to imagine what it would see. The work titled “going, so going” is a flower painting painted from the perspective of the flowers if I had the power to temporarily give the flowers my sight. 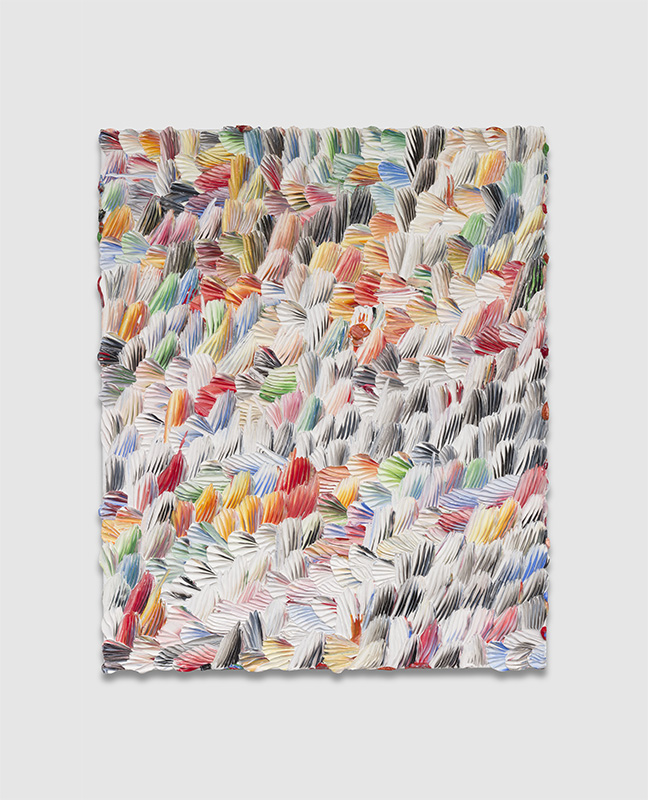 C: What are your thoughts on having a hybrid show, where Elegy and Newspaper Paintings are separately mounted at Silverlens, Manila, and at your L.A. studio, respectively?

DM: It’s pretty strange. On some level maybe it’s a good thing because it forces an engagement with ideas first and objects second. I love that to view the exhibition in its entirety, one has to suspend their disbelief as this also points to how I’d like my work to be looked at. It’s also quite nice to be able to visit my show (or part of it) every day.

C: We noticed you’ve explored with different media in the past, all of which seem abstract to us. As a new audience, what is the connecting thread, if any, that can help us understand your present and past works as a whole?

DM: That’s a tough question. I suppose if there were a connecting thread, it would be language and time. Language being fundamental in communication and time being a requirement in the processing of language. I never learned to paint or make films or sculpture. I was taught how to think about art and that the medium should always be in service to the idea.

C: Speaking of, one idea we really like is what you mention in your video, how, in the Newspaper Paintings, you were more interested in the viewer “being struck with the information: one second you don’t have it, then the next second you have it.” That’s a very specific experience. What motivated you to home in on that feeling?

DM: I suppose that there is something about the way memory operates that this idea is pulled from. The experience of lost (intentionally or not) memories coming back all of a sudden.  In addition, I suppose this has a lot to do with my interest in time that I mentioned in your previous question. In my film and video work, I dealt a lot with time by expanding it and compressing our experience of it. There is an element of it that suggests a trick.

The newspaper works in a sense compress time on a few levels. First, they represent the date of publication, second, the ‘moment’ in time, and third the amount of time it takes me to read and transcribe the article. While engagement with these three different ‘times’ is required to make the work, it’s certainly not a requirement for viewership. Therefore, I like to think that all this information somehow just ‘strikes’ the viewer, whether they know it or not.