RUE, Arce, and His Stabilizing Resolve to Work by Feel

The days leading up to RUE: Resist the Urge to Explain was bubbling with anticipation. The first solo exhibition by Arce, the name came noticeably with a trill; the consonant ‘r’ seemed almost savored as it rolled off the tongues of his admirers. And if the show’s opening day is any indication, they comprise a following that could only grow. Just yesterday, that bubble of anticipation burst online. Like a well-kept secret finally revealed, the contents spilled over excitedly onto social media: fire emojis everywhere. Even amid MECQ, Arce’s a hit.

Instagram is practically home base for this mysterious artist, who began sharing his massive works in the platform back in 2019. Pre-COVID conditions weren’t so kind, though, but the artist posted when he could; the frequency only amplified come quarantine. “Slowly, I began attracting followers again before the lockdown when I got to focus on my Art,” shares Arce. “When the lockdown did happen, I decided to put my work up for sale. All proceeds are to be donated to our medical frontliners.” 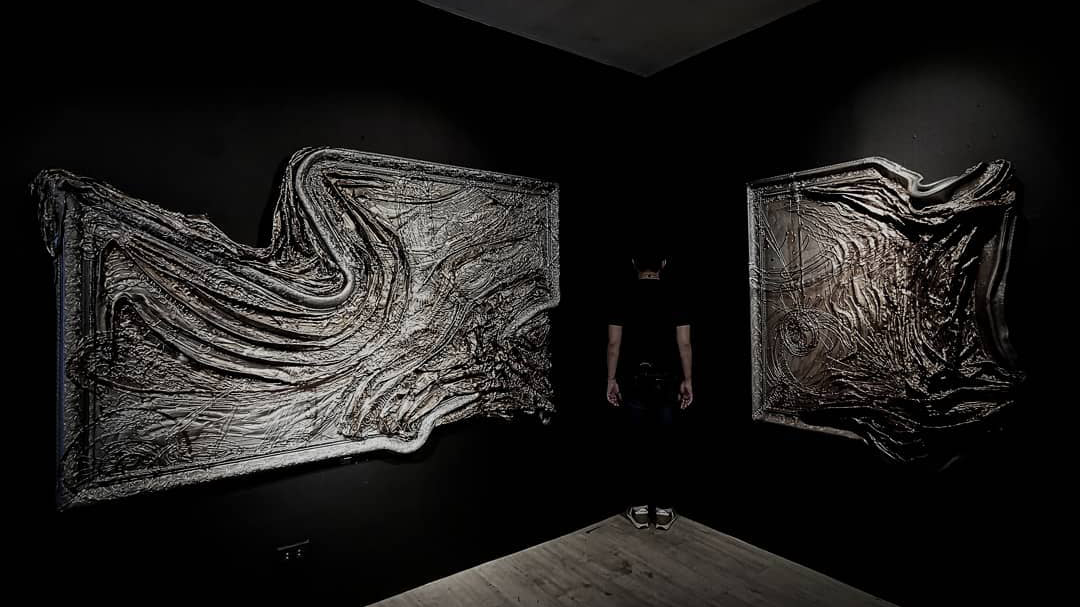 Arce by the corner in an exhibition view of Rue. Image lifted from the Instagram post of the artist.
Delete

Arce graduated from UST Fine Arts. His digital efforts into art started to draw the notice of a well-known young collector, who was a former classmate. The chance encounter triggered events that eventually had the modest artist draw in Nico Teotico of Art Underground, where Arce’s works line up the solemn black walls, under dramatic lighting that accentuates the deconstructed pieces’ sculptural reliefs. For the artist, holding his first solo exhibition was a dream come true. “I feel very nervous but also really blessed. I was in tears when I found out. I don’t have anything else to say but to thank God.”

Among his greatest influences, artists Antoni Tapies, Jason Martin, and Valerie Hegarty, Arce owes his unconventional form to the latter: the various, insistent shapes of his acrylic on canvas works portray a mind and sensibility turbulent in flux. Arce’s process is in no way haphazard, though, not a single step is conceived in abandon. The raw emotion that Arce taps into to create undergoes, as if through a sieve, a considerable meditative process.

It might explain the cool metallic finish that abounds in Arce’s works, against which the titles are what seem the most expressive. The last step in his procedure, the uncharacteristically long names register as the artist’s nuggets of insight, emerging from the psychic and emotional depths the artist had plumbed. “In spite of the emotions that flood my mind, I remain calm when I deconstruct things. And when I deconstruct, I really challenge myself to get out of the ordinary and push toward the limitless possibilities in my art.” 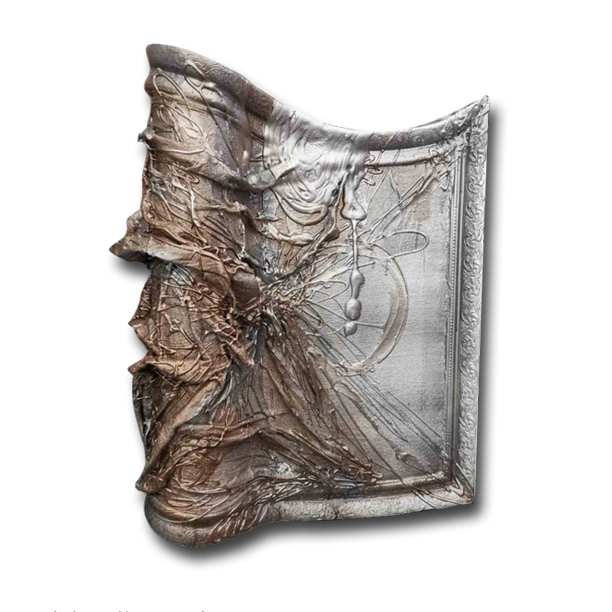 The title of one of the works above is “Twisted chance is all we get, let us not waste any moment, this is life without regrets.” On the titles in general, Arce explains: “My emotions for that particular moment dictate my long titles.” He goes on, “It [the emotions] changes every step of the way. From conceptualizing via sketching to forming by preparing my canvas drapery, then to their destruction by bending, melting, and twisting, the process resembles the multiple emotional layers that come with creating my art.”

It certainly makes for a sight to see, and for those who can take the next step beyond a digital outing, RUE: Resist the Urge to Explain continues at Art Underground until August 27. The show shares the same aura and atmosphere of mystery as the artist. “My works are the true reflections of what’s inside me,” Arce tells us regarding the show’s title. “I’d rather be silent and need not explain anything and have my works shout for itself.”

If you find yourself there for a visit, speechlessness seems to be the immediate effect of looking at Arce’s works. Benumbed sounds about right, or the feeling of being taken hold: all that needs to be said, for the artist at least, is there in front of you, shouting back.