Astride the City: Artist Interview with Vin Quilop

You can spend your whole life in a city, traverse every nook and cranny, skirt its borders, work in all types of buildings—once, at any time of day. We dwell, breathe, forget, and sleep in cities. When beholden to a cityscape, as we are sometimes wont to do, you can scan through every detail with knowledge. You can pore through it with love. But it is almost impossible to again look at it with wonder.

Through watercolor and ink on paper, Vin Quilop has been one of Manila’s resolute visual recorders. Whether it’s of a boat leaving port at Roxas Boulevard or a 7-11 shopfront done in the style of Edward Hopper, Vin’s delectable slices-of-life color in our depth of field. To say a piece of Vin’s work inspires newfound appreciation isolates it to the site depicted; it may be more accurate to say it’s like peering into a pocket of life of color. Inside, there’s a fullness to be had. A feeling like gratitude. A stroke of luck.

We catch up with Vin on his practice and travels, locally and abroad, his ideas for his next solo show, and what it’s like for this 25-year-old talent to juggle his many, many roles. 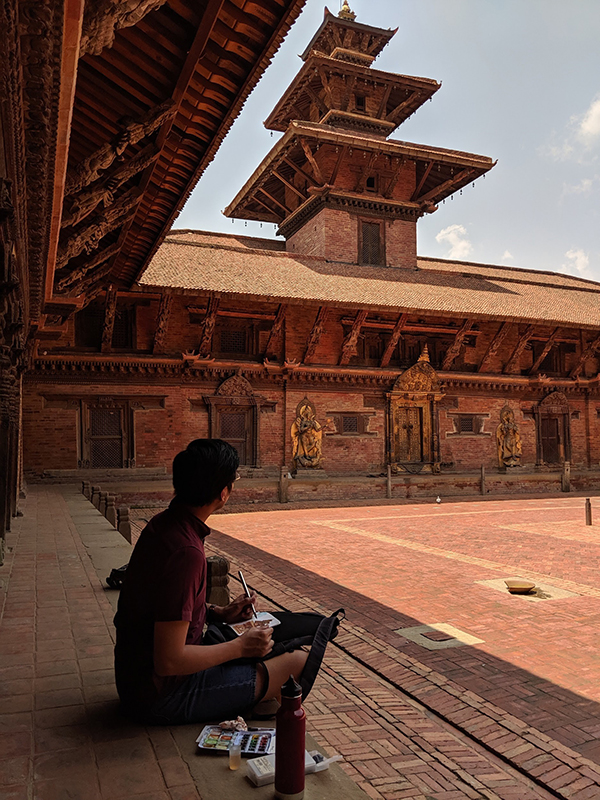 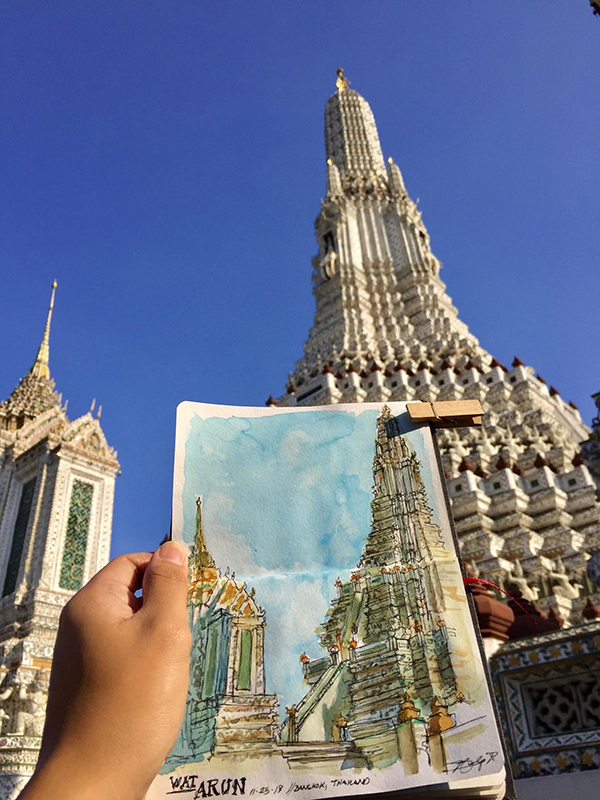 Cartellino: What and who were your big influences that got you started with art? How did you come about these ‘visual travelogues’?

Vin Quilop: When I started, I was mainly influenced by the classical style of painting. I started out painting portraits, then shifted my subject matter to landscapes/urbanscapes. Currently, I’m influenced by French Impressionism, architecture, the urban sketching movement, and the mundane moments of life. I started painting outdoors when I got into travelling. I wanted to capture what I’ve seen, experienced, and eaten and sort of immortalize it as a painting rather than just photograph pixels.

C: When we travel, there’s rarely not an itinerary to follow—an agenda—that keeps us hurried. I suppose it’s the same in our day-to-day. Your artwork as an ‘urban flâneur’ seems to speak directly against that, capturing stills and moments. Does your practice reflect a personal outlook and vice versa?

VQ: I wouldn’t say it’s entirely against that, but more of, going with the flow of the itinerary—so anything I see in between that inspires me, I capture it by painting, whether it be food, historical site, and the moments in between. I still have an itinerary to follow (a backbone, if you may), but the itinerary isn’t a “strictly to follow” type. That said, I remain flexible in terms of doing my day-to-day schedule since there are times I would paint out of the blue. Whenever I do paint, I time myself and try not to exceed one hour, since I’m also there to roam around and explore. So it goes without saying that most of my itineraries, as much as possible, are DIY travels since most of the booked tours have time-constraints. 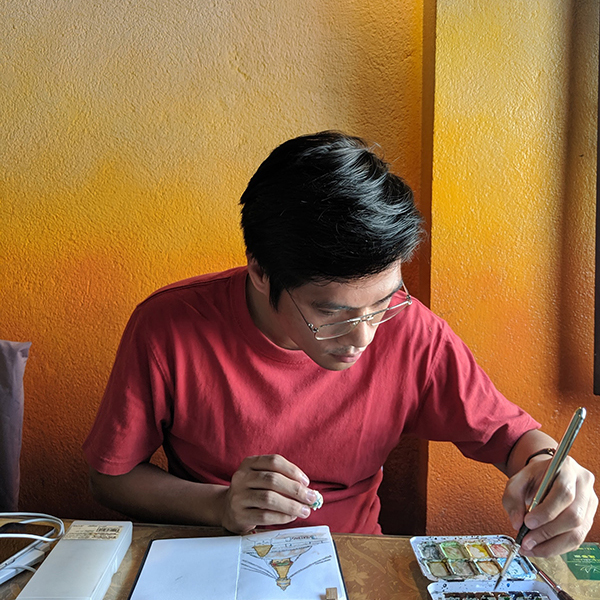 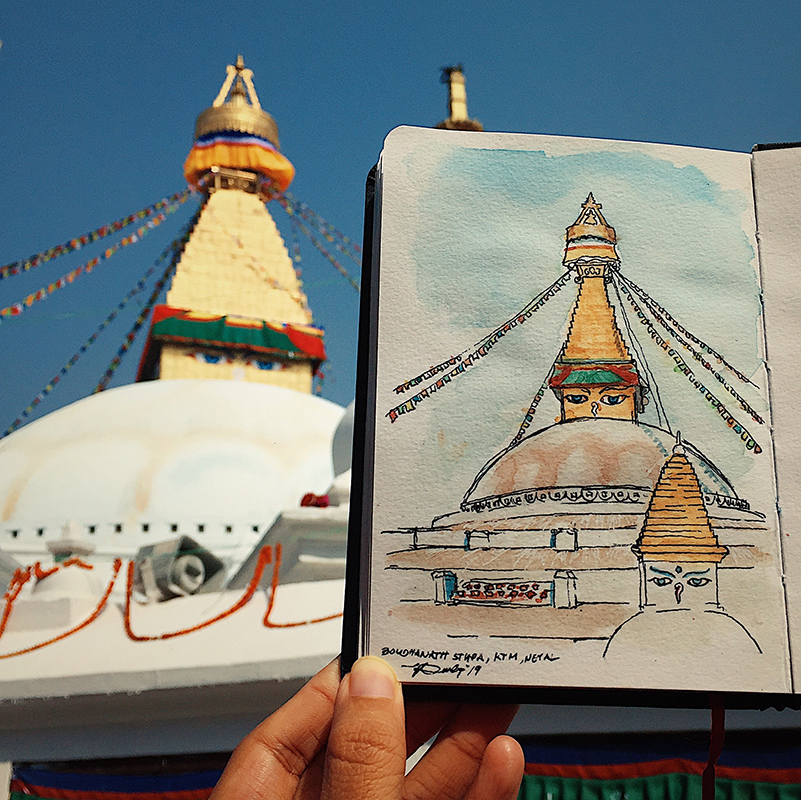 C: What about a location compels you to recreate it? Would you mind walking us through your process? How do you choose your palette?

VQ: Definitely its historical significance, when it comes to architecture and tourist sites. There’s something about the story of my subject’s past that inspires me to paint it. It’s very random, actually. So, other than that, it would be just to immortalize it in my journal to remind myself of that exact moment. My paintings usually exhibit a contrast of warm and cool tones. I make sure that I have at least equal amounts of each on my composition.

C: Is it a similar process for when you do portraiture? 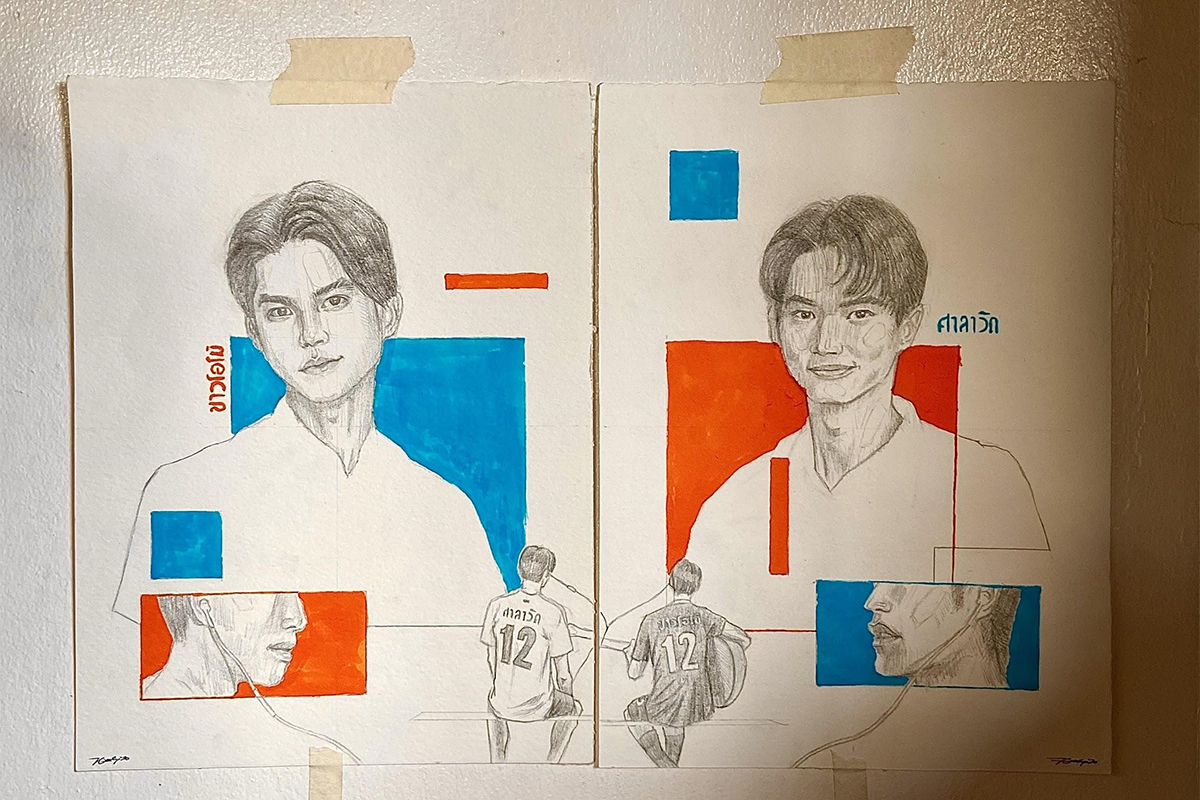 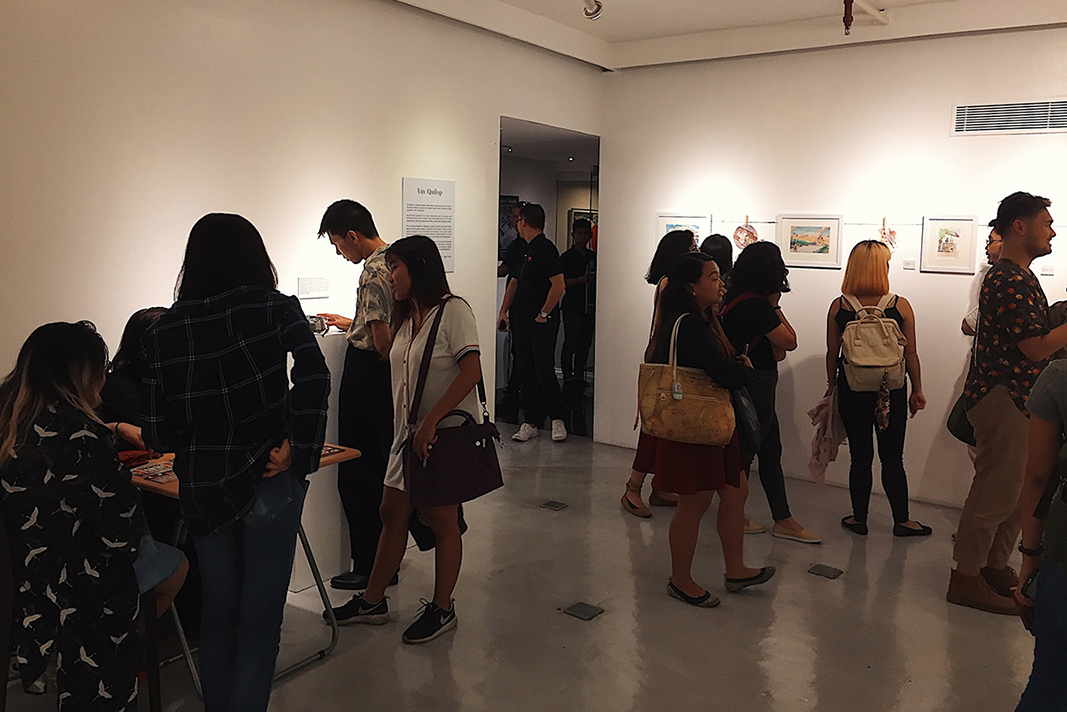 C: It’s one thing to present Manila with a general audience in mind, another to fellow Filipinos. Is there a difference in the messages you impart?

VQ: From my solo art show, In Between Manila, the message I wanted to spread across the series was simple, no matter the audience: the knowledge and importance of preserving and saving cultural heritage and architectural sites, and, in extension, the lives of the people living nearby because the small slices-of-life that bring these sites to life are as important as the sites themselves.

C: Any thoughts on what your next solo show would be about, if ever?

VQ: It’s still currently a “germ” of thought, but coming from In Between Manila, I showcased small moments that make the life of our capital city. For my next art show, I want to focus more on those moments, the routine things we do every day. I want to put importance on those as I think, however mundane these may be, they still make up most of our days. It’s like “the whole is greater than the sum of its parts” thing—if that makes sense. It’s still a work-in-progress, but I know it would definitely be something along those lines. 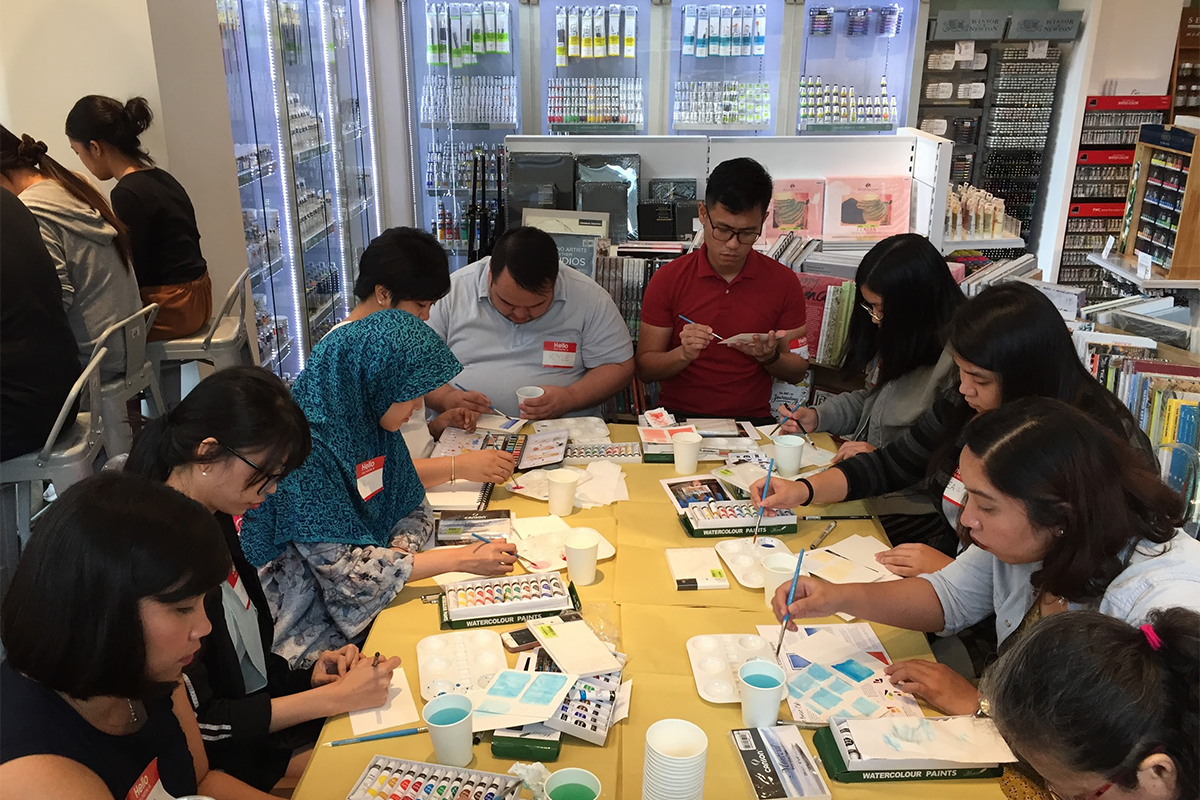 C: What’s it like to be in one of your workshops? What is your approach to teaching art?

VQ: Fun, I hope! Hahaha! I’m very casual when it comes to teaching my students, but also detail-oriented and try to squeeze in the small things that are mostly missed by quick over-the-web tutorials.

C: Apart from being into fine arts, you’re also an art director and graphic designer. What’s it like to have that kind of multi-faceted career in art, and at such a young age? What’s the next milestone for you there?

VQ: Stressful, mostly! Haha! Being a “jack-of-all-trades” has its cons. But the pros outweigh it so I’d say it’s also mostly fun to be able to play around different mediums and apply what I know in fine, visual arts to advertising arts, and vice versa.

As I said, I’d like to be able to launch another solo show, but I’m not sure that’s feasible due to the extraordinary time we’re going through now. I also wanted to travel more and apply for an artistic residency in any one of our neighboring countries (Japan, Thailand, or Taiwan). So I guess when the situation clears up, I’ll try to go for these goals one-by-one. 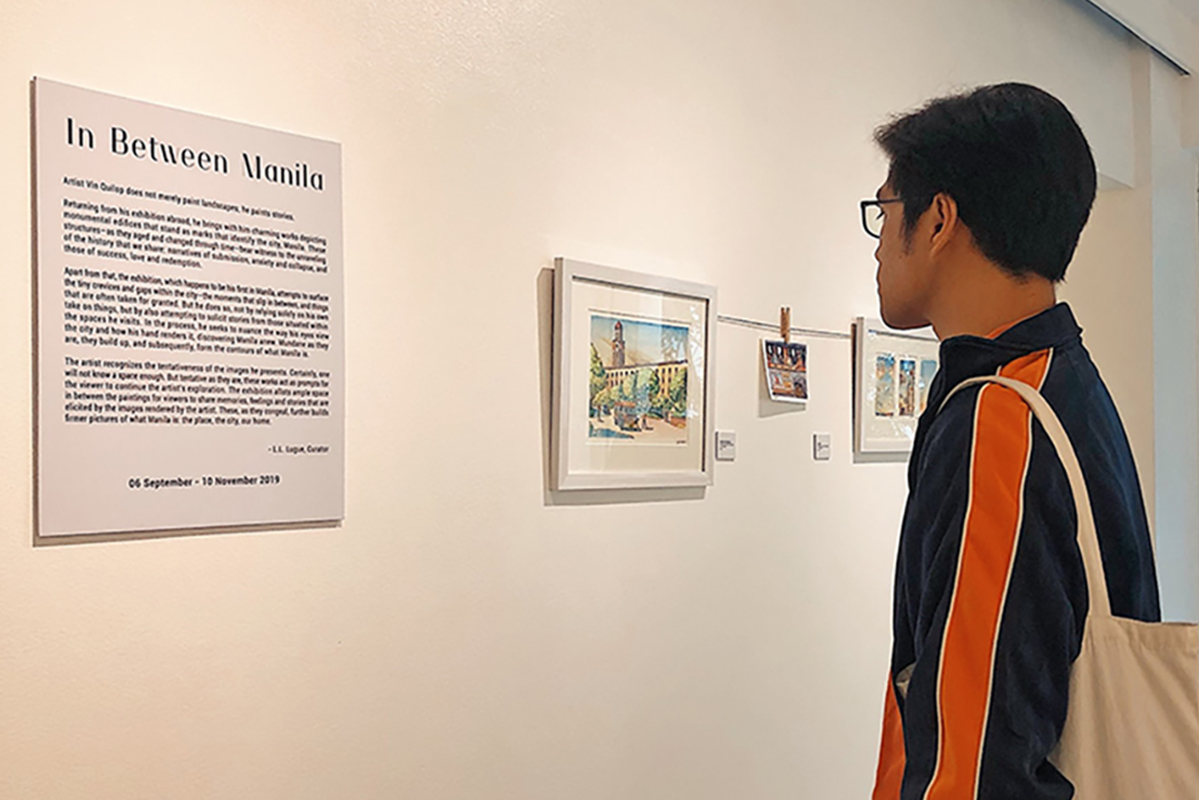 C: Any sweet spots to recommend our readers and us for when the quarantine’s lifted?

VQ: Just because I’m biased towards Thailand—Bangkok and all its neighboring cities and provinces. Locally, I’d say way up north in Ilocos, and, much more locally in Manila, I’d say our Chinatown, which has a lot of hidden treasures. I have a go-to dim sum place there. Dong Bei Dumplings.

Vin’s works, “Bangkok,” “Hanoi,” and more are available at the Cartellino Shop.

All images courtesy the artist. See more of Vin on Instagram!

To learn more about initiatives like Zero Hunger PH, ﻿Help From Home PH is an online information hub that connects people who want to help with people who need it the most.