For this month’s Creative Confidential, we got in touch with Cavity Collective (CVTY) to wrap our heads around Urban Art. For the past ten years, this independent group of talented muralists and graffiti writers—or “piecers,” as they tell us—have utilized the public space as their foremost means of visual expression. Begun with the walls of Cavite, the home province of most of the collective’s founding members (hence the name), Cavity’s murals and tags today are observable by Batangueño, Parañaque, Pasay, and Manila city-dwellers alike and more: artworks hiding in the light, at discreet spots or in the periphery of main thoroughfares, made by their cities’ own. One of Cavity’s affiliated artworks, even, is all the way in Taiwan.

It’s the elusive nature specific to Street Art that makes seeing a piece so enticing; that sudden pop up of color in a public space, in that ‘there today, gone tomorrow’ ephemera, or in the kindred sense of knowing that ‘one of us did that,’ which comes as a welcome break from the monotony of daily life.

“We want to bring the hype back for Philippine Urban Art,” Cavity writes in our e-mail correspondence. A decade-long engagement in any art form is a feat; for this collective, though, and given that it’s Street Art we’re talking about, those ten years can only have been hard-won.

“[Cavity] does not run like an organization. We do most things DIY and on-the-fly, no technicalities, no framework, just team effort and individual initiative. Every project by a member affiliated with Cavity is self-sustained.”

Despite the global audience Urban Art presently enjoys, the appreciation for it doesn’t apply the same way on a regional scale; for many countries, it remains an illicit practice mandated by law, stigma, or both, and to varying degrees. “Since there’s now a lot of sponsorship—commercial projects and commissions—we could say that the urban art scene is blooming and getting recognition. But as practitioners,” CVTY continues, “We feel that there is a slow growth of aspirants. There are more vandals or graffiti writers compared to the muralist.”

But the road toward a communal appreciation for Philippine Urban Art is fraught with difficulties and not without prejudice. It wouldn’t be too far off the mark, either, to think the attitude toward Street Art is tied to its discourse at large. Unlike more conventional forms, Street Art has long operated at the fringes of an art history that gave premium to works meant for private ownership, be it a gallery, church, collector, or museum. That is, people who sought specific things, whose wants made for the brunt of what was demanded and taught.

Street Art, on the other hand, developed separately from that up until recently, with most early artists creating their own unique styles. It belonged to another world with its own set of rules. When the Street Art of radical 1970s America attained a global reach, it didn’t so much take the world by storm as it did entangle itself in other, existing forms Street Art had taken in different parts of the world. The sudden expansion and proliferation that came with those exchanges were all but amplified in the intervention of digital media. This likely led to the mainstream appeal as we know it today, along with the diversity of free, unrestricted styles that contemporary Urban Art is known to showcase.

The erratic history can make for some blurry distinctions, and it’s something CVTY recognizes in the local scene: “Our goal is to push and educate people about urban art, its different kinds and what they look like. Cavity is blessed with different types of artists with their own individuality and purpose. There are members who base their works on aesthetics, some on technicalities, others on spontaneity, and there are some that are narrative in focus and are socially relevant.”

There weren’t many set rules for Street Art to begin with, and while that may be confounding for some, the freedom from any one kind of tradition allows for the kind of flexibility Urban Art needs, especially considering different contexts. On the question of whether public art should be priced at all, Cavity just sees monetization for commissioned artworks as a bonus, “commissions will not clear out the essence of urban art, which is free art for the masses in a sense that it’s outside sanctioned space; it is still art, it still has value. As it’s usually funded by the artists themselves, they put the effort into looking for a wall. A legal one is a perfect spot because the artist can take their time to paint. For mural commissions, the time, skill, and initiative are what the artist is paid for.”

We also asked CVTY what they thought of gallery displays of Urban Art: “There is no difference in where you showcase Urban Art, it just changes the type of viewers who see it. The street is bigger than the galleries because even those who are not into art would have their interests piqued.” 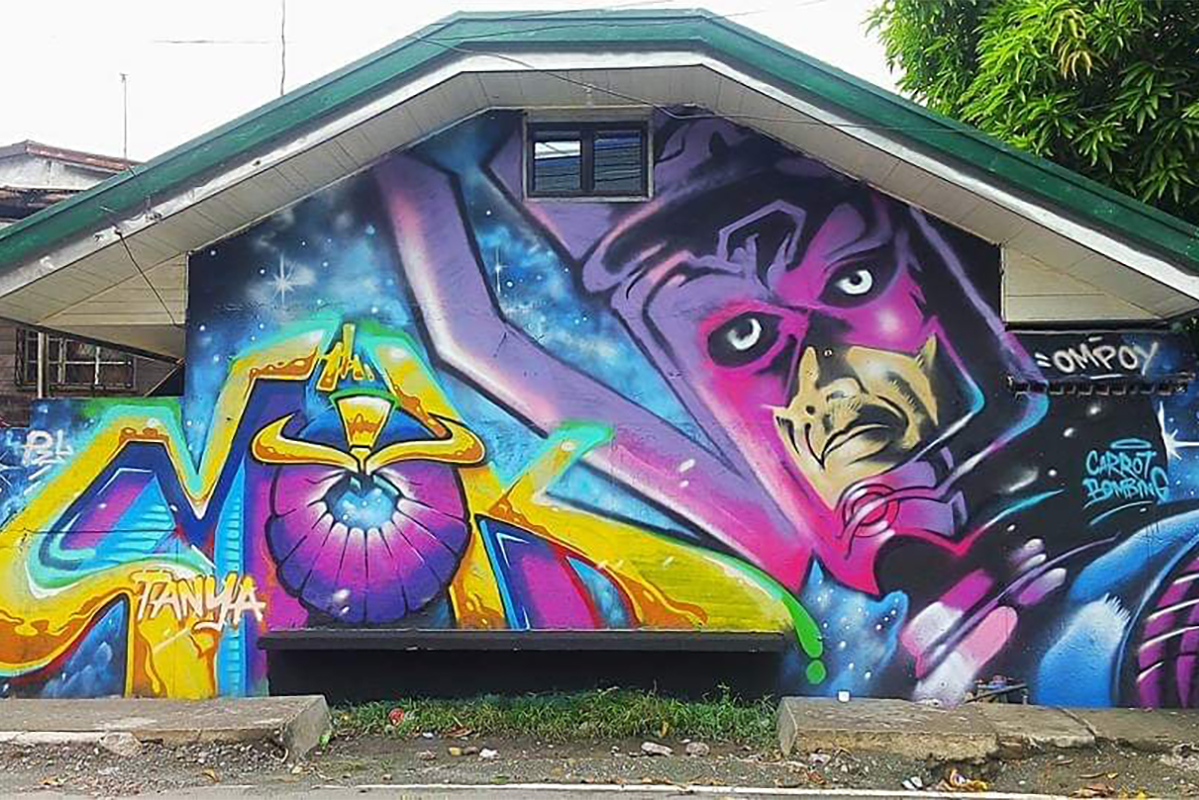 To say that Urban Art is undergoing a transformation would be belated. It changes with the city. While the popular trope of the seedy vandal with aerosol in hand may yet remain, it’s important to know that it can hardly account for what Urban Art is now. For Cavity Collective, local misconceptions that surround contemporary Urban Art is nothing new. “Currently, when we paint the street, a lot of people still call our works ‘Drawing,’ ‘Vandalism,’ or ‘Doodle.’”

There’s a reason why their name is so tongue-in-cheek: “Many people think that street art is something that damages surroundings,” explained Cavity, “So we decided to think of the walls as teeth and destroy them using our paint and ideas and show them street art is not something to be afraid of. If a typical humble pinoy could utter the words ‘Street Art,’ then we can say that we are moving. It would be easier to share what we do and move forward.”

And if their new shirt tagline (Reviving Walls Nationwide) is any measure, the collective seems like they’re just about to get started—dedicated as ever to breathe life into walls with bursts of color and encrypted messages, inscribing their marks with swirling or jagged signatures.

All photos courtesy of the collective. Visit their Instagram here.