Shedding Light: FotomotoPH on Their Inaugural and Connection through Portraiture

A photographers’ collective based in Manila, FotomotoPH aims — according to their statement — to “promote Philippine photography as a manifestation of our shared experience as a nation, including our diversity in perspective, including gender, socio-economic status, age and geography, and as an art form that expresses our identity and culture.”

And with over 100 photographers and a resulting cache of near 500 photographs for ‘Fotomoto 21 Invitational: Portraits’, one might best believe it. Running for a month and launching across several venues, the multi-site inaugural is equal parts ambitious and necessary, having slated for each space a unique set of works to be put up on display with the aim of physically showing at least 200 of the submissions for this event.

They held their first launch just last Saturday, November 20, at the cocktail bar Kondwi PH. Its follow-up is today (as of this writing) at Futur:st and The Spirits Library, also at Poblacion, Makati. (For the full list of its growing exhibition and partner venues, start here.)

“Fotomoto” is a play on the words “photo mo ‘to.” The Cartellino Team, along with Ike Penabella, the digest’s contributing writer for photography, met with the members Jason Quibilan, Raena Abella, Jes Aznar, Edric Chen, Tom Epperson, & Francisco Guerrero of this eponymous collective, over zoom to learn more about their endeavor. 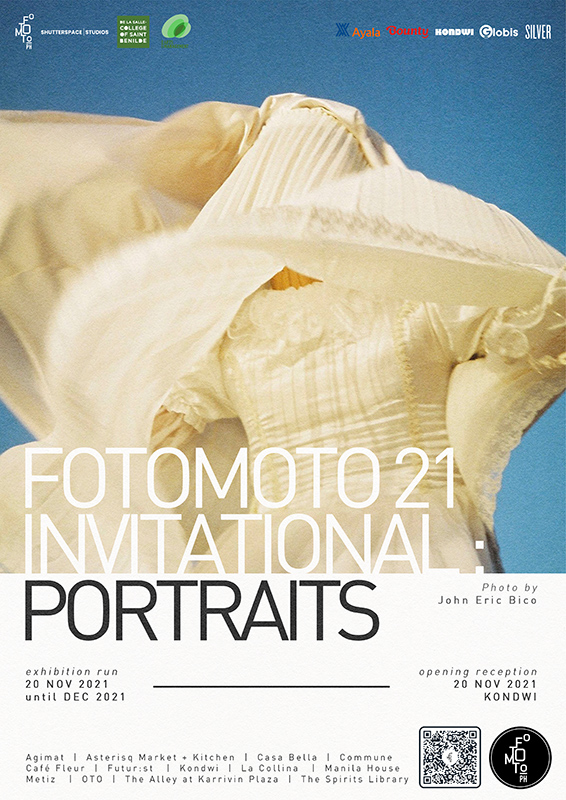 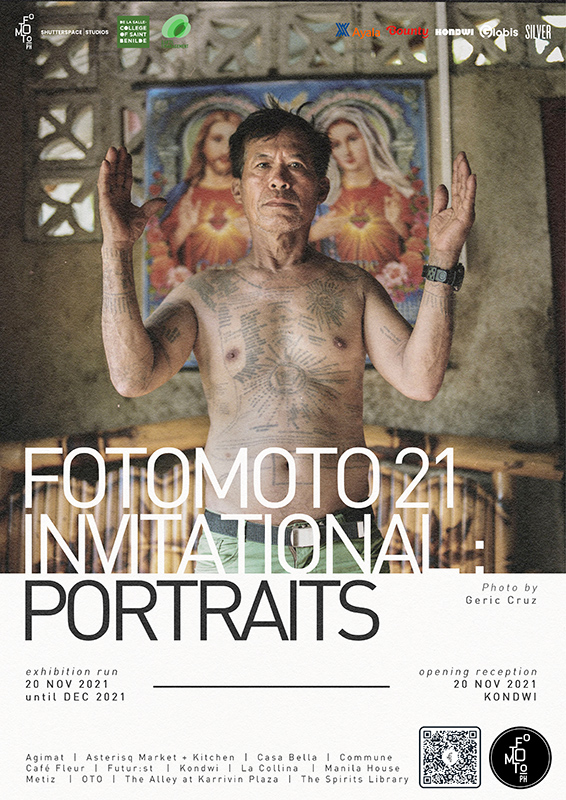 Cartellino: Seeing you all now, I realize we were first introduced to you, through Ike’s feature, as the photography collective Strange Fruit. How did it go from there to Fotomoto?

Raena Abella: After this year’s Art Fair, Strange Fruit decided to do its own show. We thought of doing a simple group show among ourselves. But the idea kept growing and growing, we started inviting others, beginning with Tom [Epperson] and Neal Oshima — now, we have over 300 photographs and maybe a dozen places to show. At the very beginning, it was kind of overwhelming idea, but we were just really excited to show the photographs in person that we just had to push through with this.

You’re also partnered with Silver for printing. Can I confirm a connection I’m seeing? Shelterfund, Strange Fruit, FotomotoPH — you’ve been involved in all these recent initiatives, all of which have to do with pushing the envelope with photography practices. Is this right?

Jason Quibilan: If you notice, most of the founding members of FotomotoPH were the same people on the fifth floor of Art Fair 2020, the last art fair that was live. That was the first time our small group came out as Strange Fruit. We did well in terms of sales. Our works were appreciated by a lot of people, and it was curated by Migs Rosales, too.

Raena: Plus Tom had his own booth. Neal Oshima and Sandro Palomar, Wawi Navarroza, Jake Verzosa, and Katya Guerrero at Luzviminda. Tarzeer.

Jason: Right. After Art Fair 2020, we did meet up after to plan for the coming years — but of course we ended up drinking, having fun [laughs] — and then the pandemic happened. The pandemic did see the rise of online efforts and groups, Shelterfund… Cartellino, also.

Everything went online. So, when Art Fair asked for participants, we were excited by the idea of course, but we were also wary. Not all photographs can be experienced through a computer, especially works that are huge and expensive.

Raena: We thought photographs should be seen up close.

Jason: Initially, it was to sell. We needed to sell.

Raena: We needed the money!

Jason: But seriously, it’s a good thing we came to our senses, from there it all came together that we could do something more. Many of us had gone abroad, seen photography exhibits and shows — and we wanted a big thing for the country ever since. Hopefully this invitational can be the starting point for next year’s Fotomoto 2022.

Raena: And hopefully later on, Fotomoto would be a festival. Our goal would be to do this next year. We’re still ironing out a lot of firsts. We had just been able to talk about it since June.

And yet you managed to find several avenues to exhibit in such a short time! How did you manage to pull it off?

The group, in chorus: Neal. Neal was very instrumental in finding the spaces.

Raena: Apa Ongpin, also. He was the one who wrote to the sponsors, helped us secure the grants.

Jason: Yes, we were lucky with the sponsors. They were very supportive and we’re very thankful.

Raena: We were also able to get sponsors for the [photo] papers, very important, as it was also expensive. The credit for that also to Neal.

Jason: Neal and Silver are also doing the printing.

Veejay Villafranca: We got partnerships with Tarzeer, students from the Benilde Arts Management helped with the graphic design and the contracts, thanks to Sandra Palomar, and Paco [Francisco Guerrero] here did the interviews.

Ike Puenabella: This is such a monumental project, the biggest I’ve seen with regards to photography as art. Why settle with the theme of photography? In one of your promotions, you mentioned it had to do with seeing faces. Can we learn more?

Tom: Yeah, the theme with portraiture is that we’ve been locked away because of Covid. And we figured portraiture would be the theme for the show. And when you think about photography, one of the most things people shoot are other people. And there are so many ways of taking a portrait, too, so it was a good way to understand the idea. 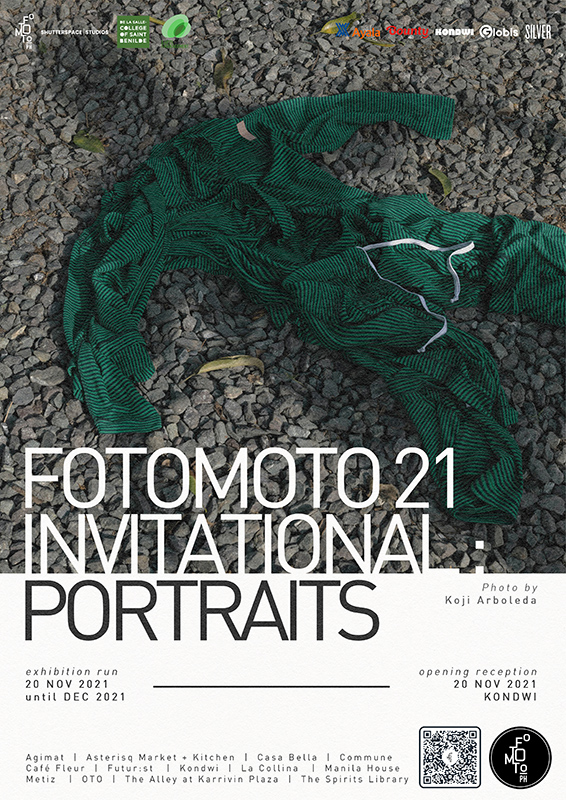 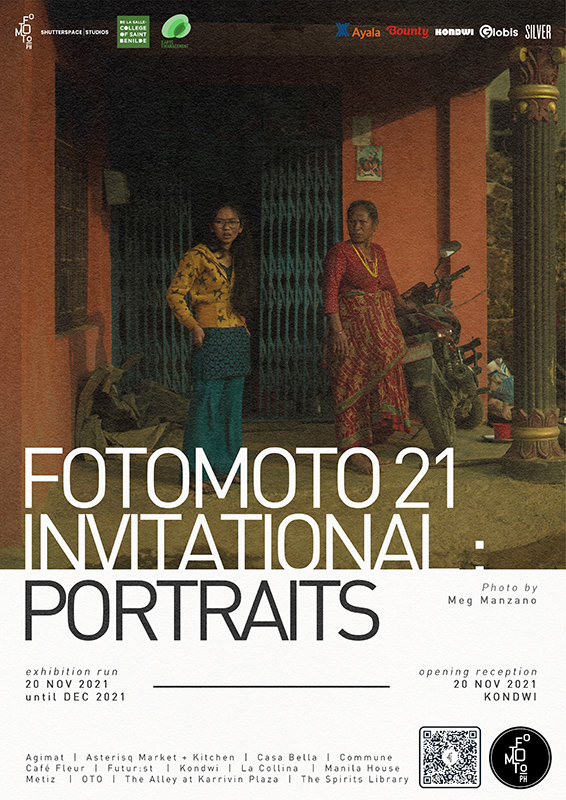 Ike: It’s interesting, considering the pandemic, which is an imposed isolation — truly the worst forms of torture. To show faces, it kind of enforces a sense of community. Was it a survival reaction?

Veejay: It’s also longing — reconnecting with ourselves and other people. Plus the work, portraiture in general, it can cover ID pictures, selfies.

Tom: It’s a very accessible subject, too. Everyone must have a portrait lying around of someone.

Edric Chen: I think the photographer’s role is instrumental in making a portrait. When I used to work as an editorial photographer, it felt like people typed us as “shutter-clickers.” It makes you feel impersonal, detached from the subject.

This idea of fotomoto is very empowering. And although some people have submitted editorial work, in one way or another, making that work spoke to them. And that’s what they want to show to the public. And so, we just want to keep on encouraging photographers in the Philippines to be proud of it, to be proud. That’s very important because we keep on forgetting — like we keep underpricing ourselves, or forgetting that we actually have a role to play in shaping the culture. Yeah, I’m really glad that we all came together to make this happen.

Ike: Thank you. Do these ideas connect with your interviews and podcasts, too? What can the people look forward to?

Francisco Guerrero: We have 5 podcasts scheduled. There’s a little secret about us photographers and it’s that we enjoy talking to each other. I helped shoot the video interviews — and to sit down in front of Neal Oshima and ask him questions about photography is an amazing experience no matter who you are. And we think there is a place and venue to talk about f-stops and lenses, the new gear in the market, even I watch those videos on YouTube every once in a while.

Raena: But we wanted an intimate space.

Paco: Yes, an intimate space where we can talk about everything else, you know?

Tom: And I think the other thing, too, when I had done workshops, one of the very first things I tried to teach people is that you need great communication skills. It really is a team effort between you as a photographer and your sitter. I still think photographers push harder than their sitter, they have an idea in their minds of what they want…

Jason: And other than the podcast, if you come to the spaces where we’ll be exhibiting — all the protocols are implemented, face masks and what — we’re also just hoping that people get together to look at photographs on a wall. One of the first things we discussed is that it’s very difficult to put up a picture. It’s even more difficult to print it and put it up on a wall.

For a lot of photographers, it’s something out of reach, something they wouldn’t even consider to do or maybe think their works are not good for it. Really, all the participants who submitted work, we’re printing it for free. It’s free. There’s no entrance fee, no competition, no automatic best. It’s about giving a chance to the next generation of photographers as much as the older ones to just put art up on a wall. It’s a very simple thing, but it’s very difficult, and I’m very grateful to be among these wonderful photographers. And as it was touched upon earlier, to be able to see someone’s face without a shield or face mask is rare.

Tom: A lot of great, inspiring work, so much so that I was a bit nervous. What’s nice was it got my creative juices going again and that’s something, you know, it’s hard to maintain. So it was really nice to see the work of the younger guys and people I don’t even know.

Jason: Also, to add, we hope we have other communities follow suit in future iterations, make sure it reaches far and wide to other communities. It would be so interesting to see work coming from Visayas and Mindanao, those areas.

Raena: One thing we would love from Fotomoto is to see these different communities encourage and inspire each other.

Edric: And we would like this community to be inclusive. I mean. Tom is white.

Tom: And I’ve been here since ’85. I just, I fell in love with this place after being here, and just after a month or two.

Jason: One of the things we couldn’t decide on was we weren’t sure if we could pull it off. We took a gamble. We really hope people find the time to experience this string of exhibits. It may be the only live art event for the year — and this is something I hope can be understood. Not everything can happen online. They can actually go and experience the prints.

Tom: And for our partners, we’ve chosen a lot of different restaurants and bars. We’re trying to help drive business, foot traffic.