Continuing with us until the end of the month is Tuchi Imperial’s ‘Smaller Worlds,’ a collection of new and selected works made before and during the lockdown. It is a fitting context for works that appear deliberately compartmentalized, as though each of them sprung from the same shared and maddening circumstance of being boxed in, as heady sensations of loss, longing, and splendor swirl in states of unbidden expectation. 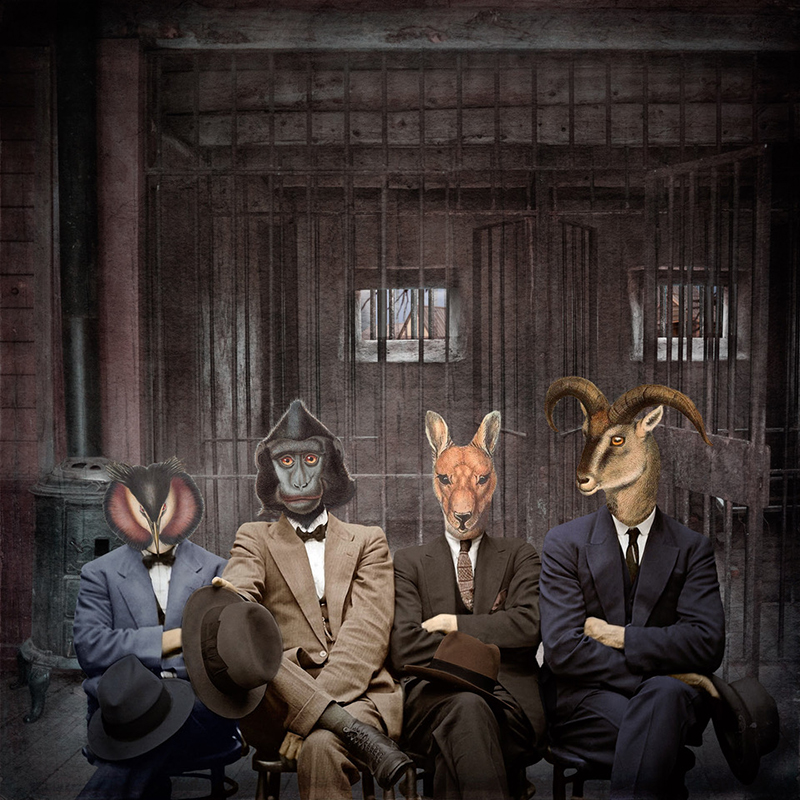 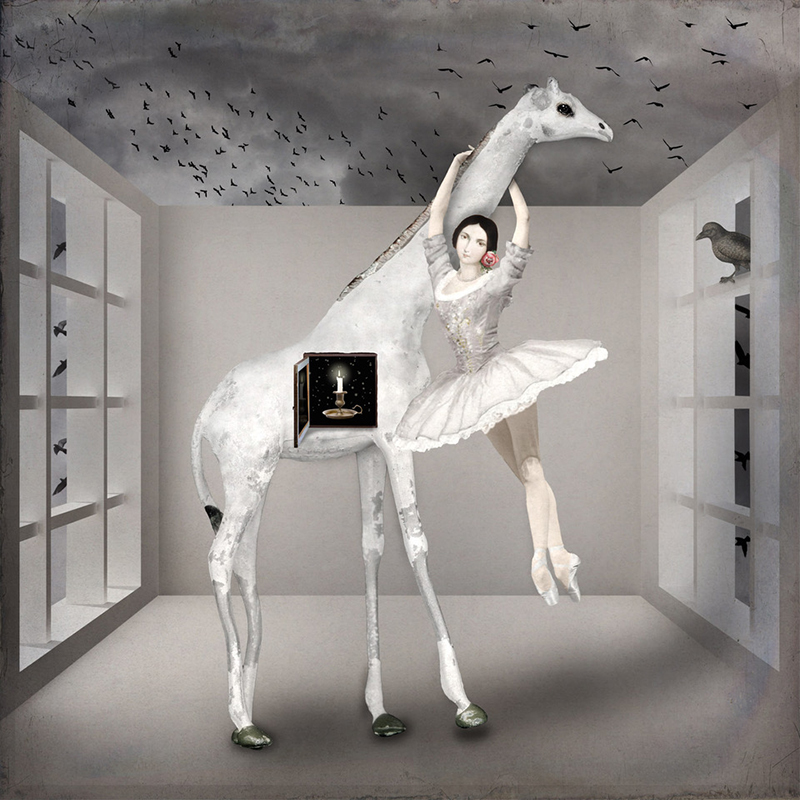 Such constraints are familiar for the artist-photographer. A distinctive aspect of her imagined scenarios is that they are loaded with repurposed archival images: scanned daguerreotypes, tintypes, and old postcards collected from friends, perusing flea markets and — when her stock ran low during the pandemic — public online collections. To deal with the past in such a way, often bereft of context, is often met with confrontation. Mugshots, for example, is a colorized image of four criminals relaxing on a couch, whose faces have been swapped with animals and with prison bars in the background. One exemption deals with past events exclusively: The Last White Giraffe, made in reference to the actual remaining giraffe of this kind, whose mate and child were killed by poachers shortly before the lockdown ensued. 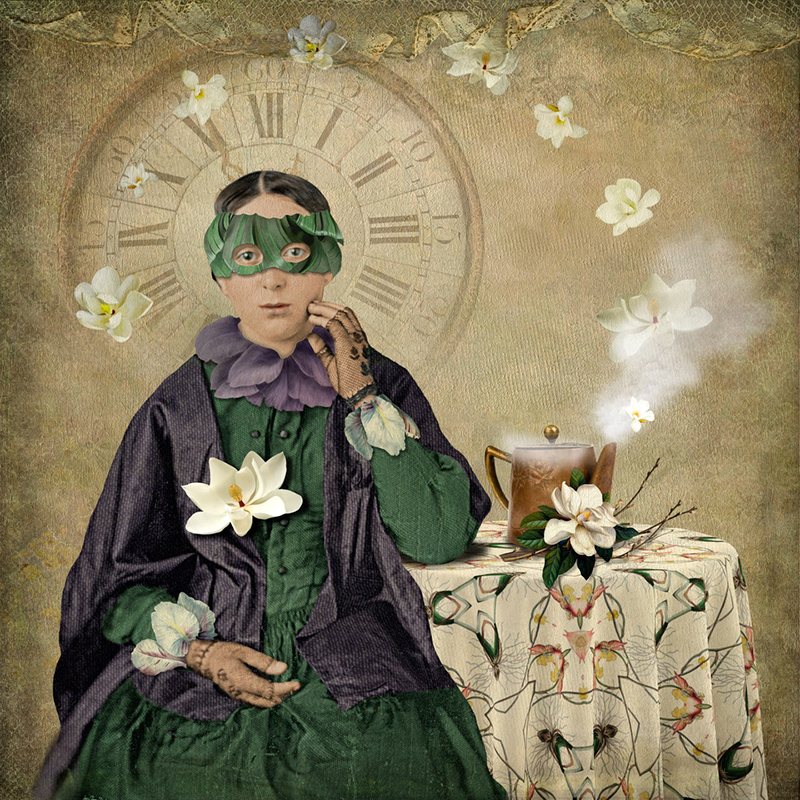 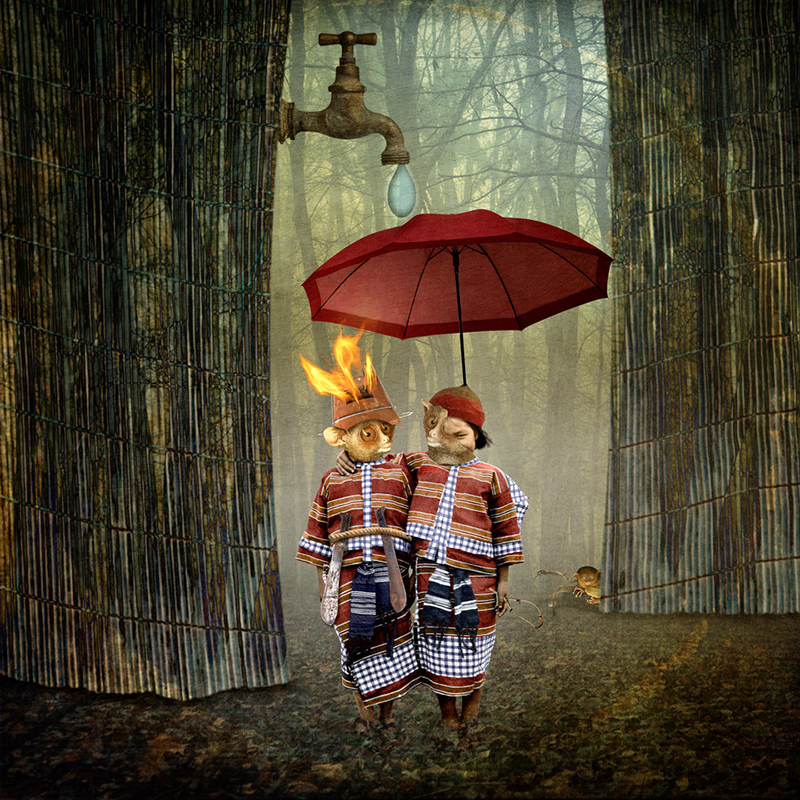 While the narratives spun in ‘Smaller Worlds’ arrive at vastly different outcomes, it is the sense of pressure that bandies these imaginative scenarios together, vacuum-tight in composition and square-framed as they are. Tension is built and released in a steady stream of changing contexts, as with the jet of vapor in Waiting for Magnolias, initiating the arc of flowers curving counter to the clock, straight from the copper kettle to the fit between an unimpressed woman’s chemise and tunic. (In conversation with the artist, she mentioned Lev Kuleshov.) And while some situations appear tragic, like the rooster-turned-wind-up-toy with nowhere to go, there are also moments of reprieve and jubilation, children forming bonds with their doubles, three blind mice stumbling on a hoard; there are, furthermore, works ripe with ambiguity, which Tuchi Imperial invites us viewers to engage with and form our own interpretations. 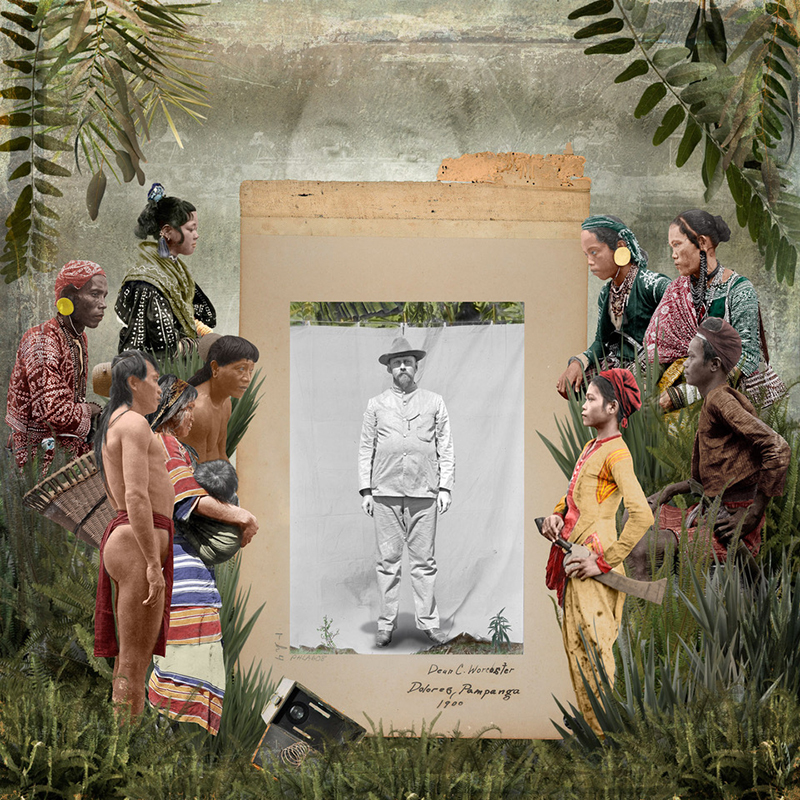 One for the final noting is Gazing Back at Dean. What separates it is its commentary, as much social as it appears to be Imperial’s position on the creative practice of photography, made public here. For his subjects to be photographed, Dean Worcester would first have them brought to a studio where they would pose according to instruction, at times attired differently, in costumes that would vary according to his taste. By the end of Worcester’s twenty-three-year stay in the archipelago, 1913, the failed zoologist achieved international renown as the “American expert in the region,” as the photographs he and his Bureau of Non-Christian Tribes numbered in the thousands, were projected in lecture halls where Worcester spoke, and were reprinted in essays he had written in support of the colonial occupation, all together in line with exhibiting the “civilizing” process that began in 1521. While the title inverts this history, as returning the gaze often does — and this time around on his rotund stomach (a metaphor for his indulgences) — Worcester, here ossified in original black and white, hardly appears worth our time. The advent of his “career” is reduced similarly to that of the technics repurposed for a people who have outlived him. Remembering a salient line from Nick Joaquin's essay, "Culture and History": "Ultimately, it seems, every invader fades into whatever tool he may have brought along." And, like the plow, even a tool can be a reminder.

Tuchi Imperial's 'Smaller Worlds' continues with us until August 30. Visit it at the shop.