Then Came NFTs: Understanding the Debate behind the Crypto (Art) Movement

Speculation and interest in NFTs have come out of the crypto world and into the mainstream in a big way. According to Dapp Radar’s report for February 2021, the combined trade volume of the three top NFT marketplaces processed more than $340 million, with NBA Top Shot providing a roaring $226 million. Though the other two are comparably smaller in trade, OpenSea and CryptoPunks have consistently been turning collectors’ and artists’ heads in the artworld and its subcultures, as these platforms (and those trailing behind them) trade digital art and collectibles.

That was last month, when digital art collection was at the tip of what seemed like a burgeoning trend. February’s last week saw a record sale for a single NFT, Beeple’s Crossroads, which was acquired at $6.6 million at Nifty Gateway. And just the other day, March 11, that record was broken: Beeple’s EVERYDAYS: THE FIRST 5000 DAYS sold for $69.3 million at Christie’s. It attracted $1 million in bids in the first ten minutes.

This figure for new media art has set a milestone for the historic auction house, as making estimates on sale now seem near impossible to do: “We replaced our typical Estimate on Request with Estimate Unknown,” says Christie’s in-house contemporary art specialist, Noah Davis.

But how did this come about? How did NFTs turn this crypto-niche into a speculation boom, allowing for the widespread entry into art on the sides of both buyers and creators? Did it just become that easy? As always, it helps to find out how these things work; that said, it helps to start with the the infrastructure that makes it possible: Blockchain and Decentralized Finance.

As per the name, the premise of Decentralized Finance (DeFi) is to cut all middlemen out of the picture from all kinds of transactions. This promises the instant settlement of what is nearly becoming anything (lending and borrowing loans, insurance, gambling in prediction markets, stock buys, etc.) outside the control of central financial institutions.

There is no need, so they promise, of a trusted third party. And as traditional financial models typically include human labor, DeFi transactions are not stacked by service charge, for example, or interest rates determined for entire populations by people behind closed doors.

These intermediaries / human executives are instead replaced by smart contracts: slabs of code for computers to “self-execute” when certain conditions are met. As these contracts are expressed in code, they are read in the accuracy of code. It does not allow for vague semantics in the fine print for shady workarounds, for example, and the selling point is that these codes cannot be altered. These smart contracts are based on cryptographic proof, not trust, and are visible to all on a distributed ledger, also known as the blockchain, where the validity of transaction is confirmed by consensus.

“Ledger” is important in understanding how this works. As in accounting, a ledger provides a transaction history to ensure that its succeeding outcomes are not suspect. Likewise, the blockchain is a system of record based on a peer-to-peer network rather than a single (and, therefore, single-owned) server and operates mainly by incentivized hardware volunteerism. When a transaction request occurs, an announcement is distributed across a network of elected computers (nodes) to verify the sender and receiver’s addresses. Afterward, a digital signature is formed as a complex mathematical puzzle (or hash) that these nodes race to solve. The one node that “mines” the right answer gets rewarded, then broadcasts the fool-proof calculation - the new block - to the rest of the nodes that then test it for confirmation.

This block is then verified, timestamped, and added to the chain, effectively creating its own system of record, preventing fraud. 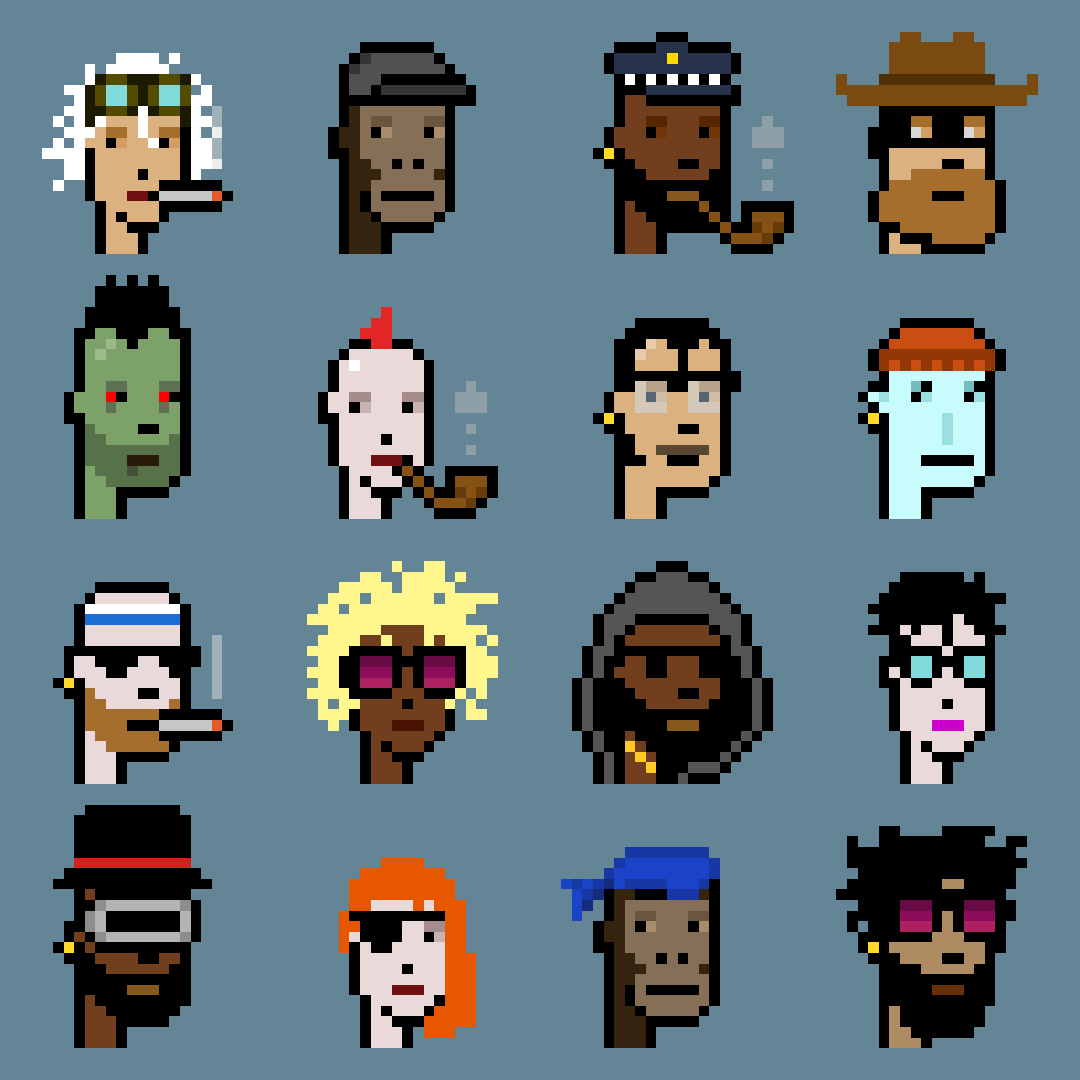 What Does This Mean for NFTs?

Platforms that utilize smart contracts (right now, just Ethereum) allow for NFTs to exist. It’s likely this isn’t the first time you’ve read about NFTs, but I’ll start the way everyone else did anyway. NFT is short for “Non-fungible Token.” In other words, it is not interchangeable. It is a custom strip of code registered in the blockchain that attributes the asset it represents as unique. That asset can be anything, even a tweet. And because it’s not interchangeable, it functions differently from cryptocurrencies, from money, as it can’t be exchanged as one would a 20-peso bill for four five-peso coins.

In general, NFTs are unique because they are verified as unique in the blockchain, following the logic that if something is said to have value, then it does.

For physical assets, an NFT can prove its scarcity and then have it known publicly at an instant. But the current debate is centered on what it may mean for digital assets, such as JPEG images of art, as the scarcity it introduces is artificial. For long, digital art has been widely shared, saved, or reproduced at simple clicks of a button; earlier approaches to certifying them have been slow-going or, like Rhizome’s Monegraph back in 2014, defunct.

While freely circulated digital art may be well-meaning, that democratic vision doesn’t account for the fact that creating such works are often supported by other, less glamorous forms of employment.

But now, with such scarcity introduced, the desirability allows for commercial value. Merging art terms, the traceability and security provided by the blockchain can be thought of as provenance for artworks, except instead of there being physical certificates of authenticity, the validity is recorded in a publicly accessible, digital ledger. Again, this prevents fraud.

The same mechanics apply to how digital art can now be editioned. Furthermore, these smart contracts allow digital artists and musicians to build royalties in their works, ensuring that they receive a cut each time their work changes hands (“or flips”).

Another aspect about NFTs that has interest piqued is that ownership can be shared via fractionalizing. Fractionalizing an NFT is akin to parceling out land, so others may purchase parts of it for cheaper instead of the whole. For Metapurse, who won the NFTs for all twenty first editions of The Beeple 20 Collection in auction last December, fractionalizing became a way for them to “accelerate the cultural renaissance.” They fractionalized their ownership into 1.6 million “B.20” tokens and put them up for public sale for cents. This was their effort to “change the game… to decentralize and democratize art – so token holders everywhere can share in a valuable piece of history and, in the process, create wealth for the entire community.”

This alternative digital economy appears to spell wonders for art, and to a certain extent, it does, though not as much for the platform itself. If the platform relied on sustained interest and for people to both use and mine the blockchain, then NFTs ensure that users will continue stoking the speculative bubble. It is not an upward movement. Regarding this volatility, Artsy’s Benjamin Sutton describes, “the art market relies on the relative stability of currencies and perceived changes in the value of artworks; imagine if the Warhol print you bought last year for $20,000 was now worth $128,000 —or, inversely, $3,125 —simply due to currency fluctuations.” 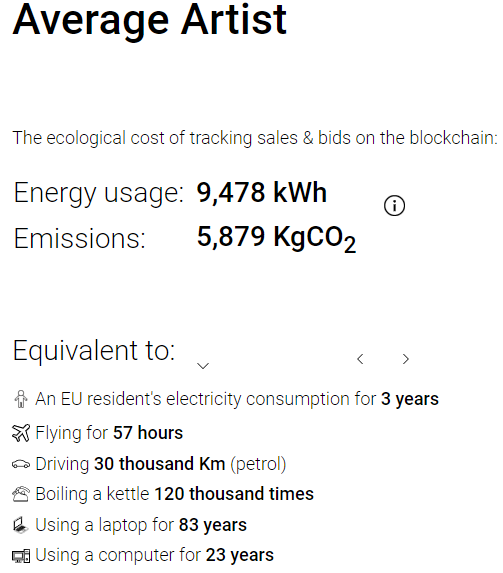 One Step Forward, Two Steps Back

But what’s the immediate catch? The buy and sell of NFTs is the baseline event, and unlike its crypto predecessors, the UX makes the trade terribly easy to do now, and with things people particularly like (e.g., pixelated cats).

The consensus model algorithm described is called Proof-of-Work, first introduced and explained by Bitcoin’s developer under the pseudonym Satoshi Nakamoto in his “white paper.” This blockchain practice is the most widely used. The larger the transaction or payment, the more security it will need, resulting in a broader participating network of nodes. This means more hardware for computing power. Similarly, the larger the trade volume, the more of these instances occur.

According to an analysis by Cambridge University, the annual electricity cost for Bitcoin Mining is more than the country of Argentina. Computational artist and engineer Memo Atken was curious about how bad NFT is specifically and began his own research. Through his article published in Medium, Atken broke the silence surrounding the carbon emissions involved in Proof-of-Work’s compute intensive blockchain practice. His website, cryptoart.wtf, discloses the ecological cost of using the blockchain to track NFTs in kilowatts per hour (kWh), along with their material equivalents.

What Will Happen Now?

Presently, it is very wait-and-see, with not a few people minting NFTs. While Proof-of-Work is widely used, especially for NFT minting and “flipping” (the change of ownership), it’s not the only one. The growing scrutiny did raise awareness toward sustainable alternatives as well as further innovation with environmental impact in mind. Between migrating to an alternative or waiting for such innovations to occur and discarding NFTs altogether, however, the former’s chances are undoubtedly higher. What pays to remember now is that, despite NFT’s speed and volatility, and no matter how good it looks, the urgency lies in environmental sustainability, not in the fever of a sale. The technologist’s argument will always be that new technology is crude before it gets better, and it does have the capacity to change the financial terrain for the better — if only it were ecologically sound.

The opinions stated are the author's own.